Dear Doc: We cylindrical OD-grind steel shafts. Our machine has options for varying the wheel and/or workpiece rpm to reduce chatter risk. How does this work?

The Doc replies: In the first option, the machine varies the workpiece rpm up and down a few percent (say, sinusoidally from 160 to 200 rpm instead of a constant 180 rpm) over a short period (usually a few seconds) to reduce “workpiece regenerative chatter.” It’s hard to explain why in less than 500 words, but I’ll try. The wheel spindle likes to bounce up and down at its natural frequency — say, 180 bounces per second. (See the figure.) This creates 60 lobes on the workpiece (180 bounces/second ÷ 3 revolutions/second). In subsequent workpiece revolutions, these lobes cause the grinding depth of cut to vary, creating a varying force pushing up on the spindle. This is an “excitation force,” which causes the wheel spindle to bounce up and down even more, creating even bigger lobes. To make things worse, because these lobes were created at the natural frequency, they now excite the wheel spindle at the natural frequency, causing chatter to become out of control. 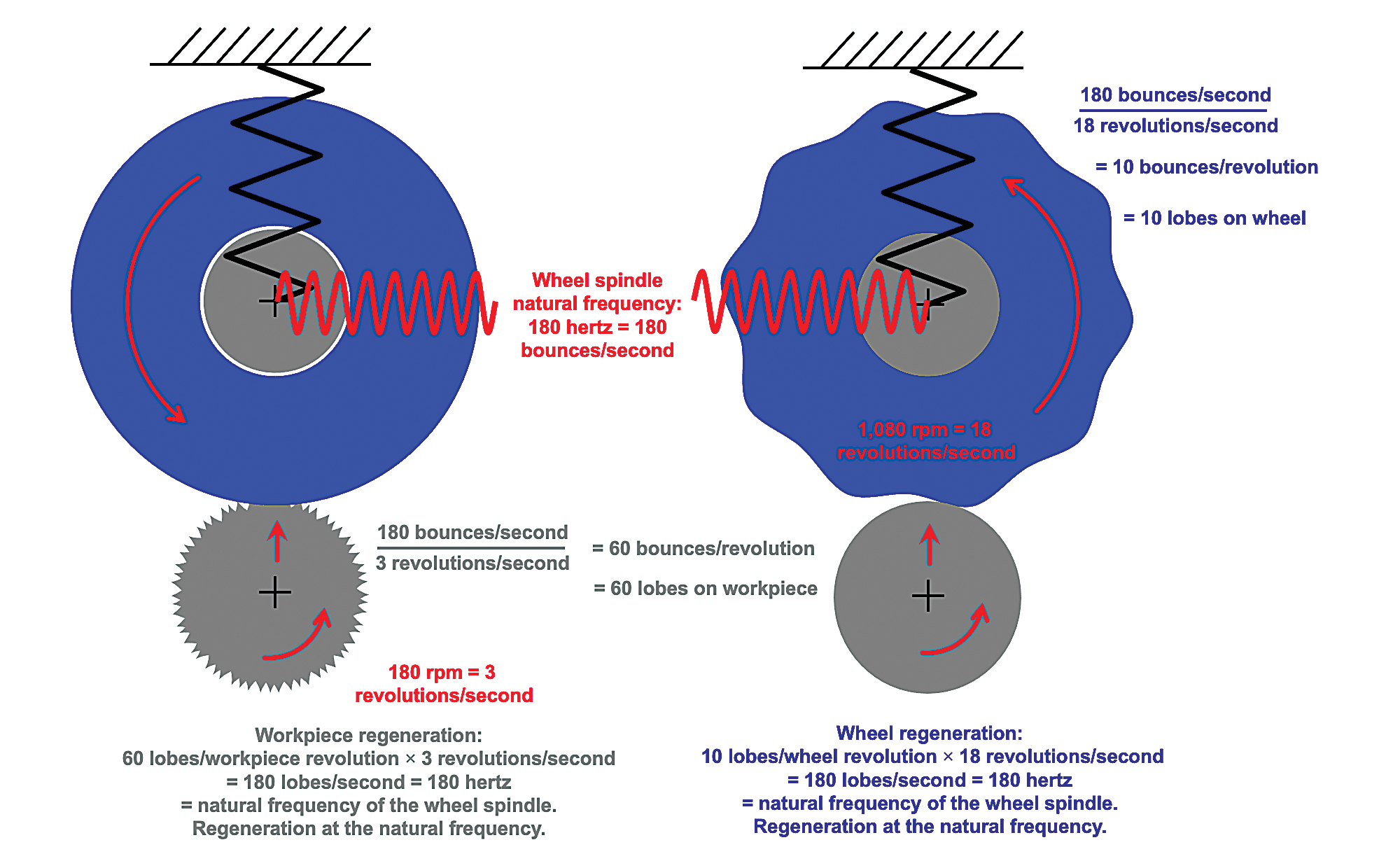 By varying the workpiece rpm, we vary the distance between lobes. They’re still there, but because the distance doesn’t excite things at exactly the natural frequency, the situation isn’t exacerbated — and workpiece regenerative chatter is reduced. Hopefully.

The second option is for “wheel regenerative chatter,” which works much the same. Over time, the bouncing up and down of the wheel (at its natural frequency) causes uneven wheel wear, creating lobes on the grinding wheel. This is also an excitation source — at exactly the natural frequency — that exacerbates the chatter. These lobes take longer to develop (minutes or even hours instead of seconds). Here, we vary the wheel speed (again +/-10% but over a longer period, like every two minutes) to vary the distance between wheel lobes and make them obliterate themselves. They’re still there but not as high, and they’re not “exciting the system” at exactly the natural frequency.

Does it work? The answer is “sort of” and “sometimes.” It seems to work better on roll grinding.