Camcraft added a flexible manufacturing system to enhance the spindle utilization of its horizontal machining centers.

Maximizing chip-making time is important when operating any machine tool, but it becomes more essential as equipment costs rise. 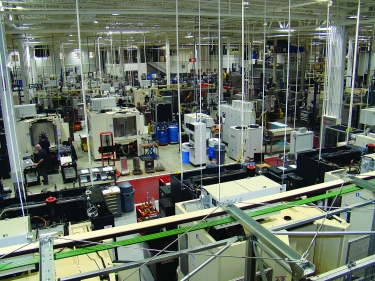 An overview of Camcraft’s machine shop, with the MMC2 automated pallet-handling system in the foreground and the two stand-alone Makino a51nx HMCs across the aisle. All images courtesy of Alan Richter

In addition to its main 120,000-sq.-ft. facility, Camcraft built a 100,000-sq.-ft. facility in Bartlett, Illinois, a little over a year ago. The latter location also houses sister company Matrix Design LLC, which manufactures industrial automation equipment. (For more about Matrix, visit tinyurl.com/ycez74fl to read this author’s article in February 2018’s issue.)

Camcraft has more than 300 employees, plus about two dozen temporary workers. It offers in-house training and has an apprenticeship program accredited by the National Institute for Metalworking Skills.

Camcraft’s new horizontal journey began with a pump. The company could have made that part on a VMC. However, Ksel explained, it was more suitable to run the pump on an HMC because of the workholding requirements and the complexity of the part features, which required integrated 4-axis machining. As a result, he narrowed his evaluation to HMCs from five machine tool builders and conducted time studies on various offerings.

In the end, Camcraft selected a Makino a51nx 4-axis 400mm HMC—the first of six he would buy. “They’re very similar,” Ksel said. “I’m very big on getting equipment that is as uniform as possible.” 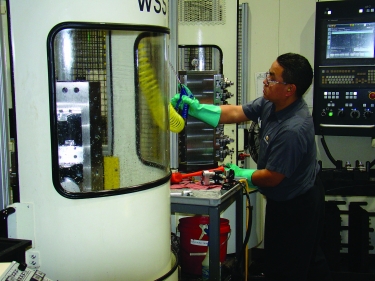 An operator loads workpieces into one of the MMC2’s two work-setting stations.

Ksel added that it is not sufficient when evaluating machines to look only at their specifications side by side, including spindle speeds, feed rates, rapids and spindle ramp up and down times. In addition, because price should be just a small piece of the equation, selecting the lowest-cost machine among ones with comparable specs isn’t advisable without detailed evaluation.

“When you really start running the machines with a program that is uniform on all the machines, you are going to see the differences between brands, even without cutting chips,” Ksel said.

Of course, cutting chips enables an end user to better determine the rigidity of the machine and its spindle, as well as its accuracy, he noted. “First, you need to know what the machine can do as far as cycle time. Then you can cut chips and see how well it does.”

In addition to the equipment, Ksel said it’s important to evaluate the builders. This process should consider a company’s history, the level of service it can provide, location, the number of service representatives and where they are based.

“When you look at taking a company in a new direction, it takes a lot of time and effort to make sure you are investing in the right company,” Ksel said. “It’s kind of like how we invest in customers. We wouldn’t invest in anybody we didn’t know. We have to check them thoroughly to see what they do, how long they have been in business and how secure the business is.”

He added that Camcraft seeks long-term partners in its customers, with machining challenges “that can take us to the next level. Something that is complex and innovative, perhaps. Something that many people have failed at. Then they come here and ask, ‘What can you do for us?’”

In addition, Ksel emphasized that proper machine selection and integrating new machining concepts are critical in the team environment the company operates in. “We are making sure our employees and the next generation of engineers and machinists have a lot of opportunities to grow the company in the future.”

After Camcraft purchased its fourth Makino HMC, Ksel said the only way the company could justify the investment in horizontals would be through increased uptime, which could be achieved with a flexible manufacturing system. Numerous systems are available from a variety of sources. Camcraft determined that the best option was an FMS from the company that built the HMCs, so the company acquired a Makino Machining Complex (MMC2) automated pallet-handling system. 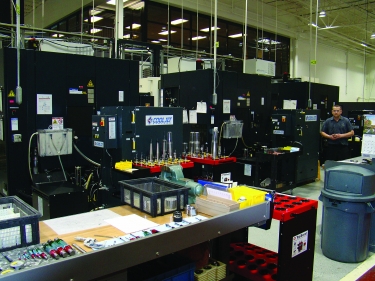 Each machining center in the MMC2 is virtually identical, including high-pressure coolant and filtration systems.

“It is coming from one company, so you know you’re going to get the support, you’re going to get all the parts worked out and there’s no finger-pointing,” Ksel said. “They have done the system so many times; we wanted smooth installation without quality mishaps, efficiency losses and demanding production schedules.”

In addition to a spindle utilization rate up to 95 percent, Ksel said the MMC2 enables quick setups, quick changeovers from part to part and unattended operation. “When you start looking at the numbers, everything made financial sense in addition to how rigid the machine is, how well built it is, how well it can hold size and how capable the process is.”

He noted that installation of the FMS took about two weeks. The four HMCs were already correctly positioned and continued to run during the installation.

Besides the machine tools, the system has a rail-guided vehicle that travels between the machines and is supported by a floor rail and upper guide rail for enhanced stability and high-speed movement. The system also has storage space for the 40 400mm part pallets and the master controller. “That’s the master brain that controls all the programs and the vehicle moving up and down,” Ksel said.

Although it is not a mandatory element, he added that Camcraft developed an independent cutting tool presetting system for the MMC2. “If you’re looking at 95 percent spindle uptime, how are you going to get that without having tools prepared and ready to go?” Ksel asked.

Makino reports that its MMC2’s work-setting stations provide easy access for operators to load and unload parts either by hand or crane. Each WSS has 180° pivoting doors to save space and prevent a cluttered work area.

Camcraft’s system has two stations for loading workpieces. “I only needed one but added the second one just in case,” Ksel said. “Thank God we did, because we are running a bunch of different parts. Everything going to one loading station would be overwhelming; we couldn’t load parts fast enough. Sometimes it takes a while to load parts, depending on cycle time, fixturing design and load time. The loading area can be very busy.”

Having a consistent, controllable process is the key to achieving the ultimate goal of machining a good part every time.

Because every person is slightly different, each has a tendency to perform tasks differently. “That’s individuality, and that’s nice to have,” Ksel said. “However, for process stability, you really can’t have five different personalities running the process five different ways.”

With an FMS, all necessary elements—including program management, parts scheduling and tool life management—are integrated and controlled, according to Ksel.

“How do you know if your tool needs to be replaced after every 1,000 pieces or 1,100 pieces?” he asked. “Every tool you change costs money, so you have to make sure you change it just at the right time before it breaks down and makes bad parts. It takes time, and we do all of that work to develop stable processes with the best quality and a low cost.”

Accurate data helps to effectively make those types of decisions. “We generate a lot of data reports,” Ksel said. “From our FMS, we can generate tool life data, productivity data, uptime data and alarm history, so you can see what happened, when it happened and on what machine. It’s a sweet, sweet system to see everything.”

“Maybe when we build the next one, we could go three stories high instead of two,” he said. “It will have a few loading stations to offer the best flexibility in the future.”

The primary driver for implementing a flexible manufacturing system is to maximize machine tool spindle utilization, and the HS flex handling system from Hermle USA Inc. achieves that aim, according to Gunther Schnitzer, the machine tool builder’s president and chief technology officer.

“At the same time, we wanted to design a flexible automation system as a means of being able to utilize different-size pallets within one system,” he said.

Being able to handle various pallet sizes enables users to efficiently access workpieces, Schnitzer added. “If you think of a big pallet and a small part, it never really works, because you are always forced to use a longer toolholder, and this in turn will lead to you having to reduce the step-over.” 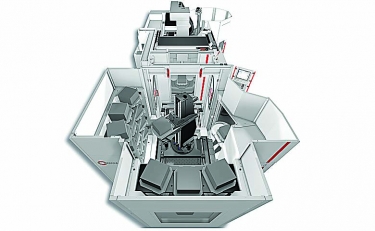 The rotary, lifting and linear axes of the handling unit enable precise movement of workpieces up to 450kg (including the pallet) among the setup station, the storage modules and the machining center’s working area, according to the company. The maximum pallet size is 500mm × 400mm.

The system comes standard with one storage module. A second module is optional. Modules are structured as racks to enhance customization of the pallet and workpiece arrangement, Hermle reports. Up to four rack shelves can be ordered for up to 25 pallet storage spaces per module, providing as many as 50 storage spaces when two modules are installed.

The company introduced an active pallet gripper for the system in April. That gripper can move and accept pallets with various shapes, unlike the inactive gripper that accepts pallets that are the shape of the gripper, Schnitzer said. Users have the option to change the gripper on the system.

HS flex is controlled and managed with the Hermle Automation Control System. HACS allows for smart order management, which reportedly aids the operator intuitively through software that can be used via a touch panel. The control system can be combined with the optional Hermle Information Monitoring System to help users monitor all their Hermle machines, display machine status in real time and grant access through a tablet, desktop or smartphone.

“Right now, if you were looking for a certain tool, you would physically go from machine to machine and check every magazine,” Schnitzer said. “With this software, you can look throughout or across all the machines in your network without physically checking each individual machine. HIMS can also tell you how efficient each machine is by evaluating and monitoring run times.”

He estimates that the vast majority of HS flex customers have people operate the system during the day and then run lights-out production during other shifts.