Eliminating toolholder expansion provides an easy and cost-effective way to achieve high levels of performance from CNC machines and cutting tools. Expansion can occur when a standard retention knob is installed in a toolholder. Pressure exerted by thread engagement, coupled with the elastic properties of the steel used to make the toolholder, creates a bulge at the small end of the holder.

Once expansion occurs, the holder will not pull entirely into the machine spindle. As a result, the holder can’t make contact with as much as 70 percent of the spindle surface. This lack of complete contact can lead to vibration and chatter, nonrepeatability, shorter tool life, excessive spindle wear, tool runout and out-of-tolerance parts.

Hansen Engineering Co. is well aware of these problems. The Harbor City, Calif., job shop produces multiple-axis parts and major structural assemblies for the aerospace industry in two buildings on its 43,000-sq.-ft. campus. The majority of HEC’s CNC machines have 10,000-rpm to 15,000-rpm spindles. 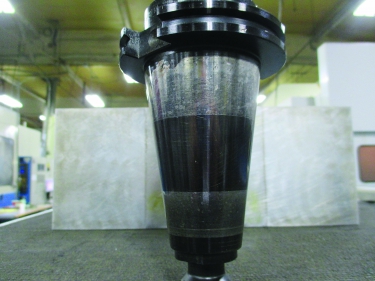 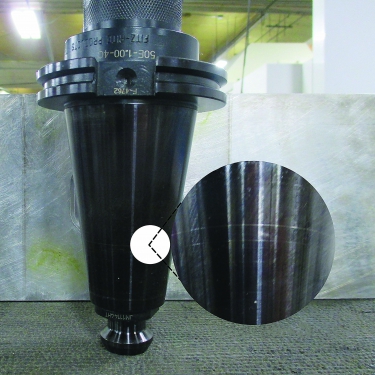 Far Left: With a standard retention knob, taper deformation on the toolholder prevents it from properly mating
with a CNC machine tool’s spindle.  Left: The high-torque retention knob from JM Performance Products enables
a toolholder to have close to 100 percent contact with the spindle. Image courtesy of Hansen Engineering

Over time, heavy-duty machining jobs began to present issues. Toolholders were getting stuck in the spindle because of deformation, evidenced by wear marks at the top and bottom of the holders. Fretting appeared on contact surfaces and increasingly long cycle times developed. These problems led to more production shutdowns to allow the machines to cool off for significant periods of time. In addition, chatter and the resulting poor surfaces were recurring when roughing titanium, stainless steel and aluminum.

Seeking a solution, HEC engineering personnel attended a trade show where they saw JM Performance Products, Fairport Harbor, Ohio, demonstrate the benefits of JMPP’s high-torque retention knobs. These knobs are longer and reach deeper into the holder’s threaded bore than a standard knob, JMPP reports. Relief located below the flange forces threads—which are cut to start and finish 180° from each other—into a deeper cross-section of the toolholder. As a result, all thread engagement occurs in a region of the toolholder where there is a thicker cross-section of material to resist deformation.

Intrigued by their potential, HEC initially purchased 25 high-torque retention knobs. They properly installed the knobs in some of their existing toolholders by following calculated torque specifications and using a retention-knob socket and torque wrench. The parts manufacturer immediately saw a 5 percent decrease in the spindle load when cutting titanium with a 3" (76.2mm) high-feed, indexable-insert milling tool.

HEC also used the retention knobs for an aluminum forging job that had chatter problems. Among the tools tested for the job were a 1¼"-dia. (31.75mm) knuckle rougher and a 2"-dia. (50.8mm) finisher.

“The results were positive, as the chatter was eliminated and it produced the best finish we have ever seen on these parts,” said Curtis Sampson, shop lead man at HEC. “After that, we bought 50 more knobs and immediately noticed improvements. We’ve been increasing their use over time ever since.”

Since installing the high-torque knobs on the toolholders used on 14 CNC machines, requiring about 120 knobs per machine, HEC has realized roughly a 15 percent increase in productivity and a decrease in machine downtime.

In addition, the retention knobs reduced the decibel level in HEC’s shop. “Our machines used to make a loud noise when changing tools, and JMPP’s high-torque retention knobs solved that problem,” said Jose Campos, toolcrib buyer for HEC. “They also eliminated fretting of the toolholder shank.”

Because the high-torque retention knobs lower the spindle load, machines experience less wear and tear. HEC’s power meter indicates a significant reduction in power consumption, and tool life improved when roughing titanium and stainless steel with tooling assemblies that have the knobs. In addition, HEC now realizes savings by being able both to increase the speeds and feeds and to shorten cycle times.