A batch of synthetically produced diamond pArticles yields a wide array of shapes and sizes. While larger pArticles wind up in grinding wheels, hones, and dressing tools, the smallest pArticles are refined into diamond micron powder. In its finished form, diamond micron powder, which consists of pArticles ranging from 0µm through 67µm (67=325/400 mesh), is most often used in slurries and compounds for lapping and polishing applications. Recent advancements in the production of diamond micron powder will allow it to meet the demands for precise metal removal and surface finishing that have resulted from trends such as:

Today, the vast majority of diamond micron powders used in metalworking are produced synthetically, either in polycrystalline or monocrystalline form.

Polycrystalline diamond micron powder’s microstructure is quite different from that of natural or synthetic monocrystalline powder. While occurring naturally as carbonado, a rare form used occasionally in specialized wheel-truing applications, synthetic polycrystalline powder is far more common. The synthetic form is usually produced via shock synthesis, which uses graphite as the source of convertible carbon. In a process that takes a fraction of a second, the graphite is exposed to a controlled explosion. The shock of the explosion transforms the graphite into 100Å microcrystallites of diamond. The microcrystallites then bond together to form polycrystalline pArticles as large as 100µm.

These powders are well-suited for applications that call for both high material-removal rates (mrr) and smooth surface finishes, such as superpolishing sapphire, monocrystalline ferrites, and titanium carbide. They are used in both loose (dry powder, slurries, or pastes) and fixed (bonded) abrasive systems.

The pArticles are divided into families and further divided according to particle type. The most crucial physical properties result directly from the manufacturing process.

Friability. The most important particle property is friability. Highly friable pArticles expose fresh cutting surfaces during use and are usually referred to as resin-bond diamond or RB micron, though their use is not limited to resin-bond systems. RB micron powder is suited to a wide variety of applications in both loose and fixed systems. It is typically the particle of choice for the loose-abrasive lapping and polishing of carbides and certain ceramics. In fixed systems, it is typically used in resin- and vitrified-bond grinding wheels.

Some applications, such as those involving highly abrasive nonferrous metals and materials, call for a less friable diamond, which is less susceptible to fracture and therefore lasts longer. This type of particle is called metal-bond diamond or MB micron, because it typically is embedded in a stronger bond such as metal. The bond must hold the particle long enough for it to cut and remove material before dulling or popping out of the bond. The bond should wear down before the particle dulls. If it doesn’t, then the bond is too hard. Like RB micron, MB micron is suited to both loose and fixed abrasive systems. Fixed systems include electroplated and metal-bond wheels.

Particle Size. Diamond manufacturers attempt to produce particle sizes larger than the micron size region, normally 325/400 through 20/25 mesh. Those are the sizes used by tool manufacturers. However, because the synthesis process doesn’t allow tight control of particle size, micron-size pArticles are also produced inadvertently in small quantities. Micronizers (diamond-powder manufacturers) purchase these "parent" pArticles. The parent pArticles are sorted according to various defect criteria, and those selected are further processed into micron feed, which is turned into micron powder.

The size of a single particle is not as crucial as the distribution of particle sizes throughout the whole assemblage of pArticles. Particle-size distributions (PSDs) can be characterized by the micron grade chart shown in Figure 1. PArticles are measured and the distribution of sizes is laid out on a graph to form a bell curve (Figure 2). Steep curves indicate that more pArticles of the same size exist in a given range. In a broad curve, many different sizes exist within a given range. The closer the pArticles are in size, the faster the mrr. The ideal situation would be to have all pArticles identical in size. However, since micron-size pArticles are even more difficult to control than mesh-size pArticles, there are always oversize and undersize pArticles. The key for the micronizer is to develop as tight a bell curve as possible.

The critical feature of any grade of diamond micron powder and its PSD is that all pArticles fall within the limits agreed upon by the producer and customer. Generally accepted specifications that detail PSD, mean value, standard deviation, and media values are available and are periodically updated by industry experts, such as end users who have their own measurement equipment and metallographers.

If all micron-powder pArticles were spherical, then particle size could be measured by diameter. But, the more angular the particle shape, the more complex size determination becomes. Since quality micron powders come in a variety of particle shapes, and all measurement equipment has detection limits, there is no single ideal device for size determination throughout the spectrum of micron grades. Most size-determination techniques produce a relatively accurate assessment of PSD, though some are more precise than others. It is only when these techniques are exercised at the limits of their detection capabilities that "fringe-measurement" inaccuracies occur. These are caused by the measurement device failing to see clearly the entire population of pArticles, thereby skewing the statistics generated.

Some common measurement methods employed in PSD determination include electro-zone sensing, laser-light scattering, and image analysis. In an electro-zone sensing device, such as the Elzone, produced by Particle Data Inc., Elmhurst, IL, material is put in a vessel and suctioned up through a ruby orifice. Each particle is electronically sized and counted. A laser-light scattering device may consist of a sample recirculator, a measurement module, and a computer-control module. It typically utilizes the phenomenon of low-angle forward scattered light from a laser beam projected through a stream of diamond pArticles. The amount and direction of light scattered by the pArticles is measured by an optical detector array and then analyzed by a microcomputer, which calculates the size distribution of the pArticles in the sample stream. Image analysis, or optical microscopy, refers to the projection of pArticles through a microscope to a video-interface system. Image analysis has played a major role in structuring PSD-determination techniques in the diamond-micron-powder industry. Correlation between these various methods can be achieved by proper calibration and use of conversion factors.

Particle Shape. The shape of a particle is difficult to define quantitatively. Because diamond micron pArticles come in a variety of shapes, it’s necessary to employ image-analysis equipment to generate quantitative data. This method is limited to a two-dimensional look at the particle population. The major drawback of this method is that the particle’s third dimension (depth) is ignored. It is the balanced relationship of length, width, and depth that determines whether or not a particle is "blocky."

Qualitative shape analysis, when used to detect uniform shape characteristics in diamond micron powder, provides adequate information to determine whether or not a powder contains shapes that will help produce optimal abrasive action during application. Optical microscopy has proven to be an invaluable tool for this purpose.

Figure 3 depicts a set of dissimilar shapes that the human eye can easily identify. A quality micron grade must contain uniform shape characteristics. Most applications require blocky cube-shaped pArticles. A blocky particle has sharp edges and corners and removes material at a fast rate, making it preferable in most applications. However, some very fine polishing applications react better with a less blocky, more spherical particle. These applications require very little material removal. Irregular shapes are more suitable in fixed-bond applications, such as electroplated wheels and hones. These pArticles are generally sharper and microfracture more easily.

Figure 2: The bell-curve PSD of an MB micron powder.

These different particle geometries can deliver unique benefits during application if the entire micron grade is made up of similarly shaped pArticles. Microfracturing occurs evenly when pArticles are of the same shape and work together for even material removal. There are no known benefits of a micron grade containing dissimilar shapes. Dissimilar shapes cause uneven microfracturing, uneven particle sharpness, and often require more energy to remove material because of uneven pressures on the workpiece. Dissimilar shapes are also susceptible to gross fracturing, which actually breaks the pArticles into two or more pieces. Today, some micronizers are capable of producing solely the desired particle shape for a given grade.

Particle Dispersion. PArticles in a solid or liquid medium should be evenly distributed over a work area to prevent uneven material removal. Proper dispersion of fine pArticles is essential for many reasons, including segregating pArticles during the grading processes, building stable suspensions, and enhancing desirable particle activity during slurry production and use. Also, thorough dispersion is a prerequisite for performing accurate size determination during analysis. 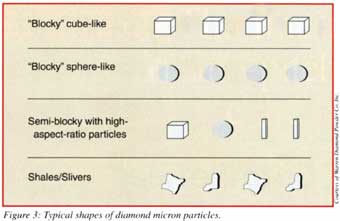 Particle-Surface Purity. Control of the particle-surface purity in any micron grade is important to both the producer and the consumer. This control can help predict the stability of solid/solid and solid/liquid systems. The presence of contaminants at threshold limits may corrupt the balance necessary for a system to maintain its stability.

Proper particle-surface cleaning treatments are imperative for achieving desirable results during electroplating processes. In fact, all solid/solid systems require surface-purity control. The pArticles must be properly prepared for attaining an intimate mixture with resin-, metal-, or vitrified-bond materials. Certain substances on the particle surface can prevent the intended metallographic bonding.

Today’s advanced technology permits the creation of diamond pArticles in the range of 0.05µm to 0.10µm; a carat of micron powder may contain 62 billion pArticles. At sizes this small, it is easy to understand how such powders can be easily contaminated by dust and grit, as well as other contaminants.

The most common contaminants found in diamond micron powders include metal and/or organic plaque, residual surfactants or dispersants, and tramp contaminants. Trace amounts of metals and organic plaques usually accompany raw materials from the synthesizer. These are substances that were not completely removed during the recovery and classification stage of processing. Residual surfactants or dispersants are materials that are commonly found in trace amounts. These materials are introduced to the particle by the micronizer to facilitate particle dispersion. The substances adsorb to the particle surface and through negligence are not removed afterwards. Tramp contaminants vary in concentration and are usually introduced to the product during material-handling stages. Their occurrence usually results from poor laboratory hygiene.

There is growing concern in the superfinishing industry that certain impurities contribute to corrosive activity during final polishing. However, purification processes are emerging that can reduce concentrations of corrosive impurities prior to cleaning.

Diamond-particle type, particle-size distribution, particle shape, and the ability to control particle-surface purity should determine the applications of any diamond micron grade. With the technology available to micronizers, each customer should be able to satisfy his special requirements by specifying the desired characteristics of those properties mentioned. If the customer doesn’t know about those characteristics, and the micronizer doesn’t have the experience to guide him, programs can be established to help profile such product characteristics.