A look at the Coromant Capto modular toolholding system.

To grab, grab at, to seize. Those are definitions of the Latin word capto. For the Coromant Capto toolholding system developed by Sandvik Coromant Co., modularity, universality and repeatability define it.

Ken Andersson, who has since retired from the toolmaker and now builds boats, invented Coromant Capto. Sandvik Coromant completed the first prototype in 1989 and unveiled the full version at IMTS 1990 in Chicago. Since then, Coromant Capto has made industry inroads via sales by Sandvik Coromant and its various licensees and was adopted in 2008 as an ISO standard (26623) for toolholding systems when the company’s patent expired and the need to license it ceased. ISO certification means no manufacturer can sell a Coromant Capto holder that doesn’t conform to the standard’s specifications. 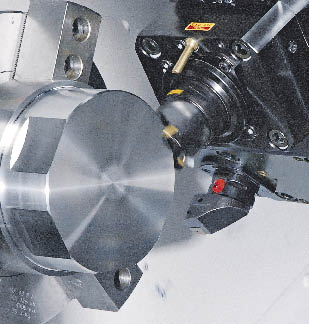 “When the patent ran out, we didn’t want people to make a lower-quality version so that it started to create problems for those who had Coromant Capto,” said Chris Mills, national portfolio manager for Sandvik Coromant, Fair Lawn, N.J. “We wanted to ensure that if anyone makes it, and anyone is more than welcome to make it, all the tolerances are exactly the same as the original. We drove this certification to make sure no one could change the design, and that’s what ISO certification achieves.”

The Coromant Capto’s three-corner polygon shape distinguishes it from other toolholders. “Why does a modular [toolholder] system have to be circular?” Andersson asked. “I found the three-sided polygon provided superior stability.”

The polygon taper ensures automatic radial centering and even pressure around the coupling, according to Sandvik Coromant, enabling repeatability within 2μm.

The polygon also provides torque transmission from the machine tool spindle to the cutting tool without the need for keyways. “A CAT or BT holder has keyways at the flange that transmits torque,” said Andreas S. Weber, president of Rego-Fix Tool Corp., Indianapolis. “Because it has a polygon shape, a [Coromant] Capto toolholder couldn’t turn inside a spindle, so the whole transferrable torque of the spindle is on the entire taper of the [Coromant] Capto holder.”

A Coromant Capto toolholder with the PowRgrip collet from Rego-Fix.

In addition to having three sides, the hollow polygon has a 1:20, or 1.4°, taper. And with Coromant Capto, multiple versions are not an issue. “There is one version only,” Tester said, “not versions A to T, like HSK.”

The Coromant Capto coupling was initially accepted in lathes because of its ability to enable quick tool changes—Sandvik Coromant says up to five to 10 times faster than conventional tools—with camshaft-style clamping. “It takes a quarter turn of a wrench to clamp and unclamp the cutting heads,” said Brent Godfrey, Sandvik Coromant’s product specialist for tooling systems. “When you set tools offline, for example, you can literally change a tool and be cutting again within 30 seconds.”

According to Sandvik Coromant, conventional tools, such as stick tools, represent about 87 percent of the global market for turning centers. Quick-change tools comprise the rest but are increasing in use. Within the quick-change category, Coromant Capto and the Kennametal KM system each have 43 percent shares in the U.S., according to Mills.

When multitask, or mill/turn, machines started to become more popular around 2000, Coromant Capto made inroads into that machining segment. “Coromant Capto was probably designed a little bit before its time because it really was the multitask machine that demanded a coupling that was equally capable for turning, milling and drilling,” Mills said.

A multitask machine’s main spindle has to lock into place for turning and free up for rotating applications, and Coromant Capto benefits those machines. “The tooling assumes that the B-axis, the actual milling head, will tip at 45° to approach the part,” explained Alan Miller, engineering manager for BIG Kaiser Precision Tooling Inc., Elk Grove Village, Ill. “With that, we can put the cutting tool on the centerline of the spindle, so there’s much less torque generated and the spindle doesn’t have to resist as much.” That extends spindle life by putting less pressure on the locking system that holds the spindle still when turning.

“When it comes to a multitask machine, Coromant Capto makes a ton of sense because you have a combination of rotating and static applications,” Godfrey said. 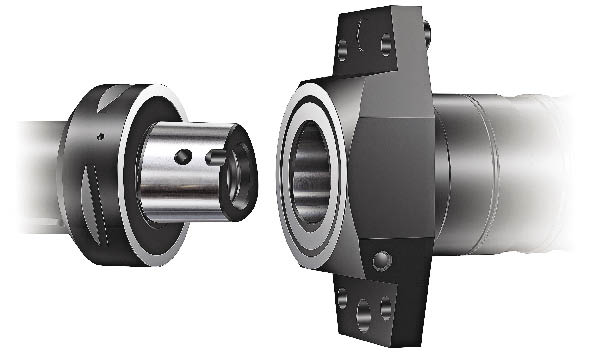 When his and her Coromant Capto surfaces are clamped together, full contact is achieved between the flange surfaces.

“When you get a basic holder into a machining center, now you have a female Coromant Capto polygon that you can stick any type of tool into,” Sandvik Coromant’s Godfrey explained. “The bottom of a basic holder has a ground surface that’s the same diameter as the ground surface on the adapter it’s going to connect to. When you clamp the two tools together, those two surfaces come in contact with each other, and that achieves the face contact.”

Mills estimated that about 8,000 machines with rotating spindles have Coromant Capto spindles and significantly more lathes incorporate the coupling. “I don’t have a good guess for that,” he said. “Maybe hundreds of thousands of machines more.”

Ordering a machine with a Coromant Capto spindle is not a major obstacle, but the tool magazine and tool-change arm would have to be changed to handle Coromant Capto’s unique automatic-toolchanger gripper grooves, which are located on the flange. “It really falls on the machine tool builders,” Godfrey said. “If some day they see Coromant Capto as an option across the board in a shop, then they will be motivated to have that spindle option on all their machining centers. A shop that’s fully tooled with Coromant Capto has maximum flexibility and the best economy because they can minimize their assortment of tools.”

The clamping mechanism for the Coromant Capto coupling.

That flexibility comes from the Coromant Capto interface that allows interchangeability of tools for different machines, even if a shop purchased the tools on different occasions. The system’s modularity enables a tool to be built to the correct length based on component size. “The longest assembly I’ve seen has probably been 26 " or 27 " with the inclusion of a dampened Coromant Capto tool,” Godfrey said.

Without the need to perform multitasking, however, end users are more likely to gravitate toward standard steep-taper toolholders, which can be ground on conventional grinding machines. In contrast, tooling manufacturers need sophisticated CNC grinders to produce Coromant Capto’s polygon taper as well as a 3-D coordinate measuring machine to properly measure and qualify it, according to BIG Kaiser’s Miller. “Steep-taper tools are much easier to produce in large quantities and by more manufacturers, so the availability of tooling choices for steep taper is much larger,” he said. “It’s just a large expense to move to [Coromant] Capto for a traditional vertical or horizontal machining center.”

In addition, Miller said on-machine spindle reconditioning, when needed, is not possible because of the complexity of the polygon and its 1:20 taper. “A [Coromant] Capto spindle needs to be pulled completely and rebuilt as a cartridge,” he said.

“On machining centers, to be honest, the first choice is probably still a steep-taper holder,” Godfrey said, but noted that the introduction of the C10 size will be more attractive for machining center applications, which typically involve a lot of milling. Milling requires more torque and horsepower than static applications, and the new Coromant Capto size’s thicker and stronger polygon and 100mm of flange face contact increases bending stiffness. “On top of that, the amount of pull force on the coupling is going to be the highest of any size,” Godfrey said.

Coromant Capto spindles for rotating applications utilize a gas spring to actuate the clamping mechanism instead of the standard Belleville washer disc-spring mechanism. That’s done to provide a consistent maximum clamping force and longer component life because there are no mechanical parts to wear out. It also provides additional pull force, which increases bending stiffness, and enables better balance for high-speed applications because there are no moving parts.

The disc-spring mechanism becomes fatigued over time and experiences a mechanical reduction in strength.

“We were losing pressure with the Belleville washers, which is why we developed this unique gas-spring clamping mechanism,” said Sandvik Coromant’s Mills. He noted one customer who measured the clamping forces over a 2-year period on a Coromant Capto multitask machine and a machining center with a CAT steep-taper spindle found a significant loss of clamping force in the machining center and none in the multitask machine—even though both machines are the same age. “He’s a believer,” Mills said.

Even when new, the pull-stud or drawbar clamping force of a gas-spring mechanism is greater than either an HSK 100 or CAT 50 steep-taper holder’s disc-spring mechanism. According to Sandvik Coromant, the drawbar pressure for an HSK 100 holder is about 16,000 N, about 25,000 N for a CAT 50 holder and 45,000 N for a gas-spring C8 holder (see Table 1). “You can apply that much force to the shape without deforming it,” Mills said. “If you apply that much clamping force to the HSK, then the coupling is not going to be physically strong enough [to resist deformation.]”

In addition to the system’s high level of repeatability when mounting tools, Rego-Fix’s Weber pointed out that the full flange contact against the spindle that Coromant Capto provides means a tooling assembly’s Z-axis height is highly repeatable. He added that when machining at a spindle speed of 20,000 rpm or higher, a steep-taper spindle cavity opens a slight amount, pulling the toolholder deeper into the spindle and altering the Z-axis height. “Because a [Coromant] Capto holder sits against the spindle, you won’t get that,” Weber said. “You would get the same benefits with the BIG Plus and HSK, but [Coromant] Capto is an entire system versus the others, which are just individual holders.”

Rego-Fix’s Tester concurred. “We find that the [Coromant] Capto system provides the best possible interface between the spindle and toolholder,” he said. “From the point of view of precision and performance, [Coromant] Capto comes very close to building the cutting edge directly into the spindle nose.” 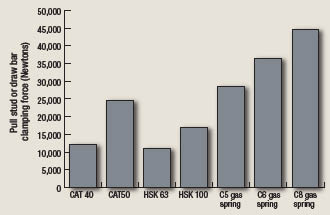 Table 1: A comparison of drawbar pressure for rotating applications between Coromant Capto holders with a gas-spring clamping mechanism and CAT steep-taper holders and HSK holders.

While Coromant Capto tooling is relatively expensive, with ISO certification the price for Coromant Capto holders should come down as the system continues to penetrate the market and is offered by more tooling manufacturers, according to Tester.

Weber noted that was the case for the ER system when the Rego-Fix patent expired last decade and it became an open standard, DIN 6499.

“Availability and competition will certainly help the end user,” Miller said. “I would be a little cautious, though, as [Coromant] Capto is such a complex profile to grind that it is going to take some of these manufacturers a long time to get it right.”

Whether Coromant Capto penetrates the VMC and HMC markets remains to be seen, but the outlook for mill/turn applications is promising. “It will be the standard for multitasking machines,” Tester said. CTE

Mills noted that Coromant Capto comes plumbed to provide high-pressure coolant delivery, so there’s no concern about how to deliver the coolant to the nozzle. “With the nozzle, we very accurately hit at the right place on the insert with a controlled, precise jet,” he said, adding that 1,300-psi coolant delivery is typically standard on premium lathes and machining centers.

The nozzle is nonadjustable, removing a variable from the process. “You’re not leaving it to the operator, who you really don’t want to decide where the coolant hits,” Mills said.