Pallet changers help VMCs hold their own in production environments

Vertical machining centers are machine shop mainstays, owing in no small part to their versatility, small footprint and relatively low cost. However, in high-volume environments, they tend to lag behind their horizontal counterparts. 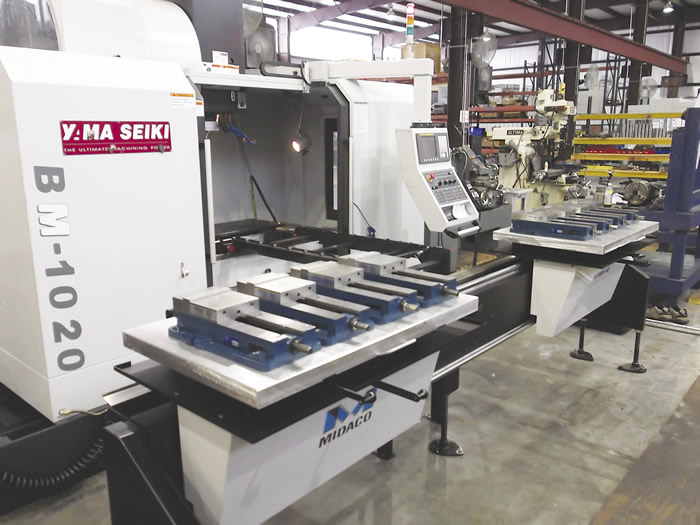 Manual pallet changers allow operators to load parts onto one pallet while another is being machined, then simply load the new one when the process is completed. Image courtesy Midaco.

With a pallet changer, he continued, average utilization rises to 60 to 90 percent by allowing the operator to perform tasks outside the machine tool while it is running.

There are three main types of pallet changers—manual, automated and robotic—but the underlying principle is the same: As soon as one pallet full of finished parts is unloaded from the machine, a new pallet of parts to be machined is put in.

With manual pallet changers, the operator physically loads and unloads pallets via a receiving bay on the front of the machine. Automated systems can be loaded with pallets, but the load/unload process is handled by the machine itself. Robotic systems utilize a arm to load and unload pallets, with each arm able to serve multiple machines.

Several types of pallet systems are available, with manual styles being the most basic. These systems involve installing a receiver bay on the front of the machine into which an operator loads a pallet of parts to be machined. The pallet is then brought inside the machine tool. This allows the operator to load new blanks onto the next pallet. When the part or parts on the pallet in the machine are done, it can simply be swapped for a different pallet loaded with blanks for machining.

“By dedicating pallets for different jobs, you can eliminate a lot of redundancies,” Midaco’s Munao said. “Whether it’s vises, table work or whatever the customer is doing on a daily basis, they can have pallets dedicated to that type of work ready to go, so there’s a lot less setup time getting the parts into the
machine.”

In addition to a manual system’s relatively low cost—Midaco offers manual pallet changers that start at around $20,000—it also occupies little floor space. 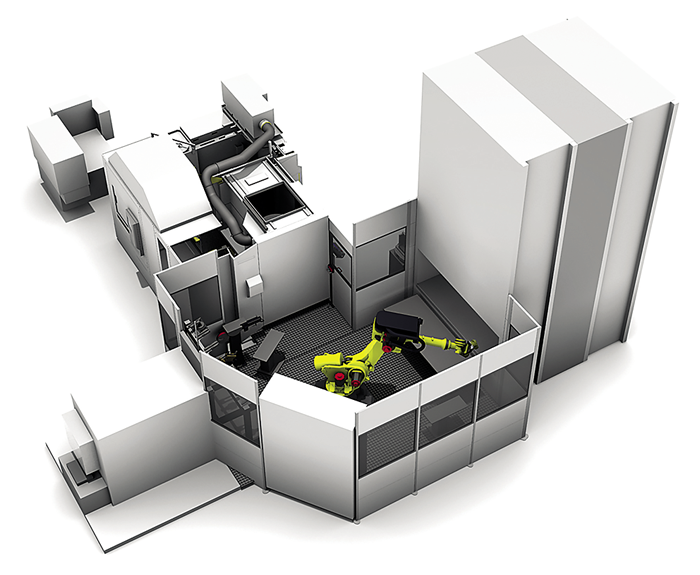 While an automatic system is mounted to the side of a VMC, Munao added, a manual system sits in front of the machine, where a human is able to physically load pallets into the pallet changer. “People put their machines very close together, so there might not be much room side-to-side, but there’s always room in front of the machine.”

Some hesitate to call manual systems “pallet changers,” because the operator has to physically swap out pallets.

“A pallet changer, as we define it, is an integrated system that is mounted to the front or the side of the machine with the express purpose of loading pallets,” said Stephen Bond, national sales manager for FANUC products at Methods Machine Tools Inc., which sells manual and automatic pallet
systems.

“Most of the shops that are buying VMCs are job shops, and they want to have at least some form of rudimentary automation,” said Richard Ware, vice president of sales and marketing at machine tool builder Mazak Corp., Florence, Ky. “A pallet changer lets them do more than just man one machine with one person. In addition, the most active sectors in the industry are aerospace and automotive, which are high-volume producers, so pallet changers let them hit those high volumes.

An automatic pallet changer provides all the benefits of a manual changer, explained Midaco’s Munao, but it changes automatically through the machine control, making the changer machine-driven rather than operator-driven.

“You can load the machine up with parts, push the button, and it’ll bring the second pallet of parts in to be machined when the first is done,” he said. “That machine can now run unattended for 3 to 4 hours.”

The goal of a pallet system is to reduce the amount of the time the spindle is idle, and an automated system is generally the most-effective way to achieve this, according to Bond. Methods, Sudbury, Mass., offers a FANUC shuttle-style pallet changer on its Robodrill machine tools and a rotary-style pallet changer on its line of Feeler machine tools. Each offers its own advantages and disadvantages.

“A shuttle system operates with a 30"-long bed, and the whole width and length of that bed shuttles in and out of the machine,” Bond explained. This requires allocating 4' to 5' on the side of the machine for the shuttle system and enough space for an operator to access it.

The rotary system tends to be a little bit faster and consumes less space than the shuttle system, Bond continued, but it is limited to a half-round space. The shuttle system allows full use of the rectangular table, freeing up space for probes and workholders. While shuttling the full table in and out of the machine is slower than simply rotating the parts, depending on the job, those gains may be made up by the ability to machine more parts per pallet.

The third primary method of pallet changing is robotic. While robots have their own drawbacks—namely cost—they get results.

“We’ve [installed] quite a few pedestal-style robotic palleting systems for our larger, Tier 1 automotive customers,” said Mazak’s Ware. “In those situations, we will typically work with another company that supplies the robotics while we handle the integration.” 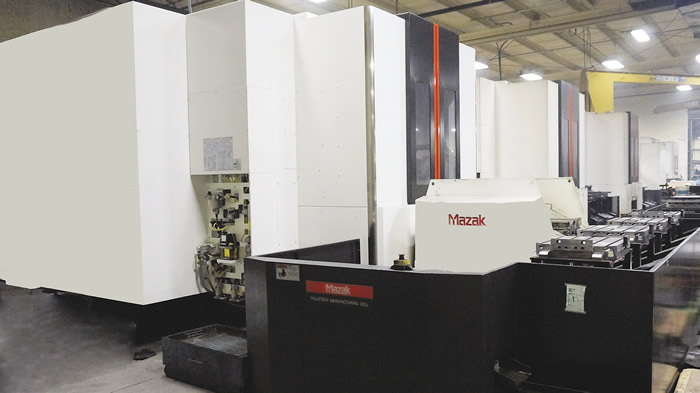 Because 5-axis vertical machines are relatively expensive “when compared to lower-cost standard VMCs,” Humphreys said, “it’s easier to justify the high cost of robotic automation for 5-axis machines. The goal is to maximize spindle hours, and when the spindle hours are worth more than the machine tool and the manpower that you put in front of the machine, that’s when [robotics] becomes a worthwhile investment with a fast ROI.”

What kind of investment? A basic FMS that can serve three 5-axis VMCs will cost in the neighborhood of $800,000, Humphreys said.

“If you take those three machine tools and have 40 different jobs to run between the three spindles, you’d be constantly changing between pallets and see your spindle utilization collapse to 30, at best 40, percent,” he said. “Investing in an FMS could increase the spindle utilization in excess of 85 percent. In addition, if you have three shifts running three machines, you could need up to nine skilled operators. With an FMS, you can do the same amount of work with one operator per shift, so your savings can be huge.”

While there are many options, any VMC can benefit from a pallet system, according to Midaco’s Munao.

“I don’t think a VMC should be on the shop floor without one,” he said. “The notion that ‘I don’t need a pallet changer because I don’t do high production’ is a myth. If you want to increase productivity and decrease setup time, you should use a pallet changer.”