One year into the future at GE

GE Power opened its “Factory of the Future,” the 125,000-sq.-ft. Advanced Manufacturing Works (AMW) facility in Greenville, S.C., with great fanfare in April 2016. The result of an initial $73 million investment—with another $327 million over the next several years across the GE Power Greenville campus, where the facility resides—AMW was commissioned to drive innovation and fast development of best-in-class technologies.

So, what’s futuristic about the place? It boasts state-of-the-art manufacturing technology, including a microcutter that shines a laser beam through a thin jet of water. The jet of water focuses the beam, cools the surface of the component being cut and flushes away debris. The system, which incorporates a Synova laser, GE holemaking software and a Makino milling machine, cuts ultrahard alloys to make turbine engine parts. 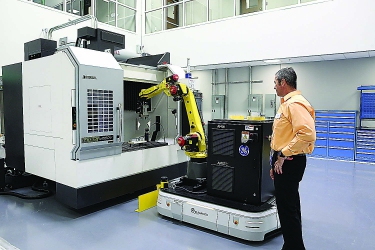 Beyond the science fiction future evoked by laser beams and robots, the most forward-looking technology here may be the facility’s use of Industrial Internet of Things technology. Everything is linked by a digital thread. From design to delivery, the entire manufacturing process is connected, with monitoring and data analytics that reportedly fuel improvements at a pace undreamed of in past decades.

“The facility will revolutionize the way GE Power designs, creates and improves products by serving as an incubator for the development of advanced manufacturing processes and rapid prototyping of new parts for GE’s energy businesses,” GE Power stated in the news release that announced AMW’s grand opening. “New techniques and production processes developed at the facility will bring new best-in-class products to global customers quicker than ever.”

One year in, CTE checked with Kurt Goodwin, general manager of advanced manufacturing for GE Power, to see if the future is still as bright.

“GE’s Advanced Manufacturing Works has really progressed since the opening 1 year ago,” Goodwin said. “We’ve helped our production factories succeed in multiple areas. These include the ability to deliver optimized programs and tools for airfoil milling, as well as automated applications to help improve worker productivity for cold-metal transfer welding and grinding.

Goodwin makes it clear that the facility is more than a manufacturing-technology laboratory. Real production for real customers is being completed.

“Our first production cell for 3D printing has already delivered thousands of gas turbine parts,” Goodwin said. “It’s been a huge achievement in such little time, and we’re excited for the year ahead.”