Fixed-pocket, brazed-PCD boring tools can run for long stretches of time while producing mass quantities of high-quality parts, but only when everything in the setup is correct. That includes the setting of the PCD cutting edges, TIR, clearance, back taper and hone.

However, if some aspect of the costly cutters isn’t right, problems result, with the potential to halt production, according to Dennis Amstutz, manufacturing engineer at General Products Corp. The Livonia, Mich., job shop provides machined assemblies found in almost all modes of transportation, including automotive vehicles and medium- and heavy-duty trucks. 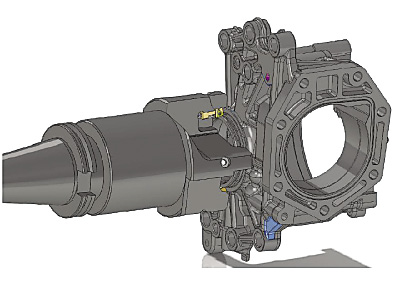 Amstutz said a new brazed-PCD boring tool costs from $2,000 to $7,000 and, on average, it costs about $2,000 to have one reconditioned when it dulls and begins to generate inconsistent bore sizes and finishes. In addition to the expense, the lead time for a retipped tool is typically 8 weeks or more.

Regardless of the lead time, reconditioning a PCD-brazed boring tool that’s been run 2 years or more and machined in excess of 65,000 parts doesn’t mean it will perform as well the second time around. Size, taper and TIR can change during the retipping process, and General Products couldn’t “plug and play” a reconditioned tool with confidence. “It’s a 50/50 shot whether it’s going to be correct or not,” Amstutz said, adding that the company sometimes needs to modify part programs to produce acceptable parts.

There’s no guarantee that a new fixed-pocket boring tool is going to cut correctly either, Amstutz noted. He added that having everything right on a boring tool is especially critical for General Products because a lot of the bores on its parts have tolerances of ±12µm (0.0005”). “It’s just kind of a crapshoot.”

According to Rigibore, its hand-held, digital Smartbore Adjuster enables both skilled and semiskilled operators to quickly and easily make manual, micron-accurate adjustments to the cutting edges of a fine boring tool while it is in the machine spindle. The rigid design reportedly eliminates backlash and ensures a consistent, accurate performance without risking movement when clamping and unclamping. In addition, Smartbore cartridges fit ISO pockets.

“Let’s say an operator misloads a tool or there’s a crash,” Amstutz said. “More often than not, you are just going to destroy an insert and/or cartridge—and inserts and cartridges are replaceable. No major repair is needed, as it would be for brazed-in tooling.”

While the PCD inserts for the Smartbore tools provide the same durability as brazed-PCD tools, in the case of insert damage or wear, Smartbore tools may take a couple of hours to reset in a worst-case scenario, according to Amstutz. This eliminates the problems associated with regrinding PCD-brazed tools.

Based on the gains realized with Smartbore and after an evaluation of other options, Amstutz enlisted Rigibore’s support to machine an A-383 aluminum, die-cast axle housing for a leading 4×4 automaker. For the job, Rigibore designed, with the assistance of its specialized RADS (Rigibore Automated Design System) software, and produced three special boring tools that rough and finish simultaneously.

“It’s got the roughing insert and the finishing insert in the same tool. They’re just offset from one another,” Amstutz said. “Instead of using two tools, I can do it with one.” This enabled General Products to reduce its tool requirements by 40 percent.

According to Rigibore, its previous successful projects outlined combination tools as an effective means of significantly reducing cycle time. By having multiple cutting edges on one boring bar, two critical diameters can be machined in “one shot.”

In addition, Rigibore produced one special turning tool for finishing the OD of a sill bore hub to achieve a tight tolerance. The turning tool was applied after roughing the hub with a different tool using a single-point insert, Amstutz explained. “The overturning tool has to maintain the concentricity of that outer hub diameter to the front bore on the opposite side within 20µm,” he said, adding that applying two tools instead of one was the only way to maintain that concentricity because of the tight tolerance.