Until I started working for Mitsubishi Hitachi Power Systems Americas, lifting parts was never a consideration in daily production. Previously, the parts I dealt with were small, usually never larger than a dinner plate. Lifting equipment, such as forklifts and pallet jacks, were often employed, but only to move raw materials to a machine tool or to load and unload trucks—never as part of the production process.

At Mitsubishi, we build large-frame gas turbines for the power generation industry. Our turbines are immense, complex machines with thousands of components. These components weigh anywhere from a few ounces to 120,000 lbs. (54,431 kg). Ultimately, the fully assembled gas turbines we produce can weigh in excess of 500,000 lbs. (226,796 kg). 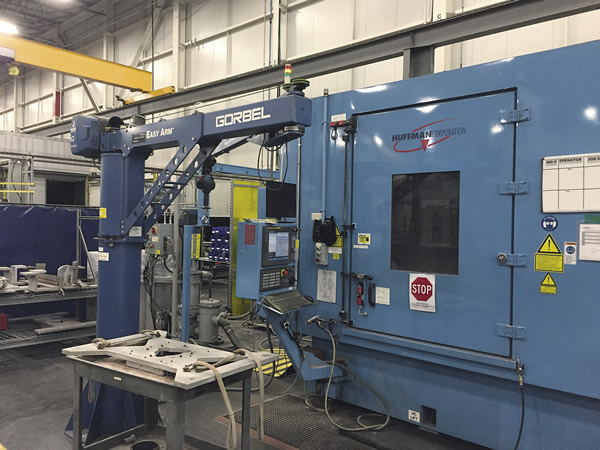 Cranes provide the needed capacity and flexibility to lift and move material around the factory. In many cases, a crane is the only tool that can perform heavy-lift tasks.

Jib cranes are simple machines that have an L-shaped construction with a mast that supports a single arm called the boom. A trolley and hoist mount on the boom and move in and out relative to the mast. This construction provides 360° of load rotation and allows the operator to place the load anywhere in the circular area under the crane. We use jib cranes for applications where loads are small and high maneuverability is required. Jib cranes are often less expensive and more easily relocated than other types of cranes, making them ideal for moving material for a single machine or around a work cell.

Gantry cranes are another type and have a U-shaped construction, wherein two legs support a beam and the entire structure can move fore and aft. A trolley and hoist traverse the area between the legs, allowing placement of a load anywhere inside the area between the support legs. Gantry cranes can cover larger areas than jib cranes and are more economical than overhead cranes, making them ideal for defined areas in the shop where overhead cranes are not available.

When there is a lot of material movement in one area, we have experienced productivity losses because people must wait for an overhead crane. To minimize such productivity losses, we use gantry cranes in these areas to reduce competition for large overhead cranes. Gantry cranes are also more mobile than other styles because they are usually not fixed to the floor or other parts of a building, easing rearrangement of machines and manufacturing cells. Sometimes a change in workload or product mix can eliminate the need for a crane; mobility makes the crane less likely to become obsolete. 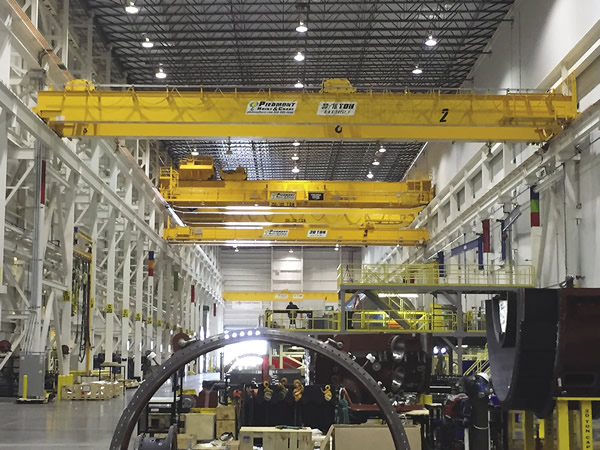 The gas turbine assembly bay is home to the shop’s largest bridge cranes. The largest two are rated at 250 tons each.

Bridge cranes, also called overhead cranes, are fixed to the support steel of a building and reside near the roof. Bridge cranes, as the name implies, “bridge,” or span, the entire building. Opposing walls support the rails carrying the bridge structures, with a trolley and hoist moving along rails on the bridge.

We use bridge cranes—the “big boys”—to cover large areas and carry heavy loads, such as 50,000-lb. (22,680 kg) castings, 125,000-lb. (56,700 kg) rotors and entire turbines. Because of their size, power and complexity of operation, we try to use bridge cranes only for the largest loads and place gantry and jib cranes where the loads are smaller and require more-frequent movement.

The hardware needed to attach a load to a crane, called rigging, is as varied as the loads. Most people would recognize common rigging hardware like straps, slings, saddles and hooks, but many would be unfamiliar with the planning that goes into properly utilizing this hardware for a heavy lift.

Heavy crane lifts and assembly of large components is dangerous work, wherein people’s lives and millions of dollars are at risk. Preparing a heavy lift is not as simple as throwing a strap through the crane hook and pushing the “up” button on the control box. Engineers and crane operators spend hours planning each lift and creating a lift plan that outlines the methods and hardware to couple the load to the crane.

A lift plan precisely dictates the type of hardware, connection points, strap angles, load center of gravity and dimensional information needed to correctly place rigging. These plans are used each time a component is lifted and are reviewed and revised regularly to ensure safe operating practice.

On occasion, engineers and crane operators face a situation where the load is greater than the stated capacity of the crane. In these cases, an engineered lift is typically performed. Engineered lifts are extremely precise events that are governed by strict guidelines that require inspections, limit the number of engineered lifts that can be performed by a crane and dictate who can approve the final plan. Often, crane manufacturers employ personnel dedicated to providing this service so their customers can be confident that the cranes will function safely.

Those who have been around cranes and heavy lifting probably find much of the work mundane. If you are like me, having had little or no previous exposure to heavy lifting, the activity is fascinating and worth witnessing if the opportunity arises.