In the course of developing a machining process for a 3¾ "-OD, ¾ "-thick 316-L stainless steel retainer used in food processing equipment, R&M engineered an efficient workholding system and changed the casting method for the workpiece material. As a result, the Milton, Wis., shop was able to reduce scrap and cycle time while fulfilling the customer’s strict surface finish requirements.

The machining process involved two operations on a CNC lathe and one on a vertical machining center. Working from a customer-provided part print, the shop created machining programs in GibbsCAM software for a Warner & Swasey WSC-6 lathe and a Fadal 2216 VMC. 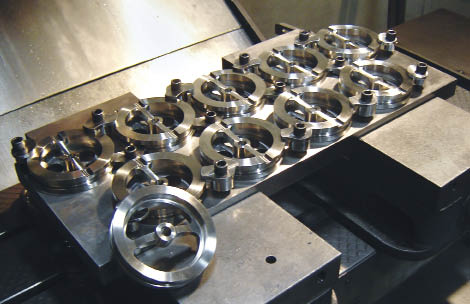 For machining on the lathe, the rough casting was clamped in stepped soft jaws. The first operation involved turning the retainer’s OD for approximately half of its length, machining the contour of the part’s face and drilling a 0.374 "-dia. axial hole in the part’s center with a carbide drill. The hole was then reamed to a diameter of 0.377 ".

On the VMC, Mitsubishi endmills applied at 350 sfm and 25 ipm milled the inside profile of the retainer and cut two 0.375 "-wide × 0.125 "-deep slots in the face of each part. To hold the retainers for this operation, R&M designed a fixture that handles nine parts simultaneously. Cagle noted that secure workholding was essential to maintain the 32µin. Ra surface finish the part required. To assure consistent part location, the fixture plate’s base was fitted with pins that matched the central axial hole in each part.

Radial cutting forces were another concern. “Doing that contour, we were pushing the part, and it did have a tendency to rotate,” Cagle said. That tendency was overcome by a series of 15 clamps. Every retainer was secured by a minimum of three clamps; some of the clamps contacted two or three parts, engaging the top sides or O-ring grooves of the retainers. “The more contact points, the more stable it was,” Cagle said.

After initial part runs, changing the casting process for the retainer blanks helped R&M achieve significant productivity improvements. The opportunity to try a new process arrived following a change in R&M’s role in the production of the retainers. R&M originally began machining the parts as a subcontractor for the OEM. Initially, the OEM provided sand-cast blanks of the 316-L stainless steel and paid R&M to rough and finish machine them. However, the blanks often exhibited unacceptable amounts of porosity. As a result, the scrap rate was about 15 percent. In addition, the rough castings featured about 3⁄32 " of excess stock per side, requiring both roughing and finishing passes to achieve the desired final dimensions and surface finish.

R&M eventually gained total responsibility for producing the retainers, including sourcing the castings. It was decided to have the blanks produced via the investment casting process, a version of the loss-wax method that employs a wax or foam master to create a refractory (ceramic) mold of the part. After the wax is removed, the part is cast in the mold.

For the retainers, the as-cast surface finish produced by the smooth ceramic was much finer than that produced by sand casting, and the casting’s higher precision minimized the amount of excess stock that needed to be removed. The new casting method yielded a porosity-free part and less material to remove. “We were only taking off about 0.015 " per side,” Cagle said. “We were able to eliminate roughing completely.”

Following the change to investment casting, Cagle said, the scrap rate became negligible and the elimination of roughing passes reduced cycle time by about 30 percent. R&M typically produced the strainer in lots of 100 parts, with a lead time of 2 weeks. CTE