The fractious U.S. Congress has offered bipartisan support for the Obama Administration’s National Network for Manufacturing Innovation, the network of manufacturing hubs designed to bring together government, industry and university resources to improve materials and processes. Nine hubs have been started since the NNMI was first proposed in 2012, with 45 expected by the end of the decade.

However, such collaboration across institutions long predates NNMI. As the first NNMI hub, America Makes, enters its fourth year, another organization, the National Center for Manufacturing Sciences, is celebrating its 30th anniversary. NCMS was founded as North American manufacturers faced intensifying competition from overseas. 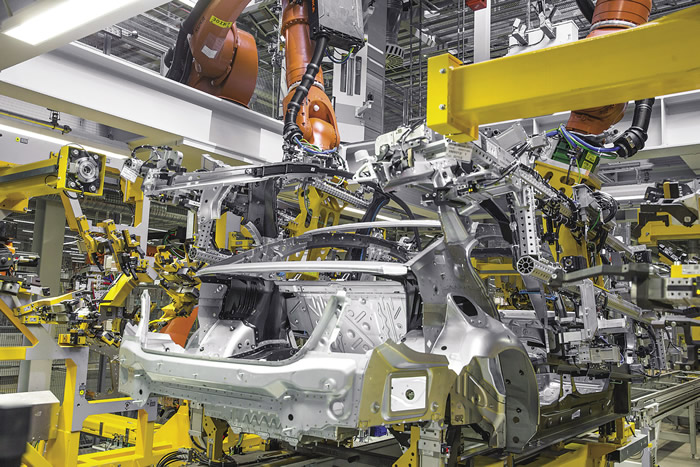 Assembly at BMW’s plant in Dingolfing, Germany. BMW has worked with NCMS to research the replacement of parts made of traditional metals with ones made of lightweight titanium alloys or carbon composites. Image courtesy BMW Group.

“Since 1986, NCMS has been a leader in building industry/government collaborations to bring cutting-edge innovations to market. We accomplish this faster, at lower cost and with fewer risks than if participants worked independently,” said Pam Hurt, NCMS director of membership and communications. “By leveraging our resources and network of 4,000-plus partners, we arrive at solutions that improve the competitive standing of the North American manufacturing base.”

Though NCMS’s founding mission was to provide the required infrastructure for collaborative R&D—which the center still does—the organization has evolved along with manufacturing and now provides products, services and initiatives to further the overall goal of improving global competitiveness.

Jon Riley, NCMS senior vice president of technology, spoke to CTE about another area in which the center has a long record of successful collaboration: lightweighting.

BMW of North America LLC, Woodcliff Lake, N.J., is an example of an OEM that has worked with NCMS on lightweighting. 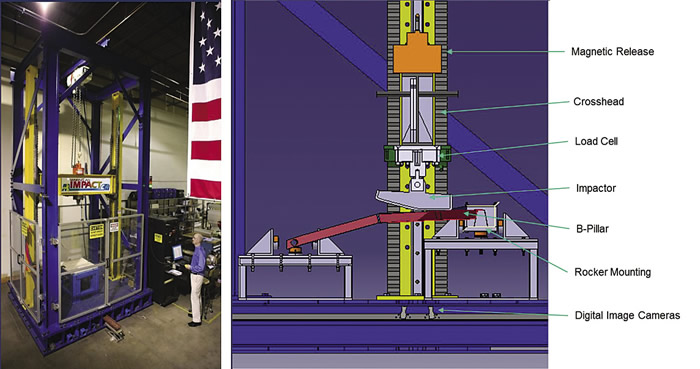 Photo and diagram of a custom-built 20’ tall drop tower used to test the composite B-pillar at the University of Delaware Center for Composite Materials.  Image courtesy UD-CMM.

NCMS administered the Department of Energy-sponsored Lightweighting Automotive Materials for Increased Fuel Efficiency Program, which brought BMW together with Clemson University–International Center for Automotive Research (CU-ICAR), American Titanium Works and machine tool builder Okuma America Corp. to demonstrate the
feasibility of manufacturing a titanium automotive part to reduce mass and improve fuel efficiency. The component was a front-suspension fork assembly on a BMW sport activity vehicle produced from a ductile-iron casting—a component that BMW would like to be able to replace with a titanium one.

“Although titanium has a much better strength-to-weight ratio than traditional metals and great corrosion resistance, material and processing costs have kept it from being widely used in automotive,” Riley said.

The suspension fork’s components were made from titanium plate and rod stock via EDMing, waterjet cutting, milling, turning and warm bending. The major elements of the suspension fork were joined using TIG welding, and then the assembly was stress-relieved to remove any stresses that developed during the joining operation. Following the stress relief, finish machining was performed and then the part was surface-treated to remove any discoloration caused by welding and heat treating.

An analysis concluded that the total life-cycle costs of the two prototypes produced were comparable to that of the original ductile-iron component—even with the higher raw material costs. This suggests that replacing the existing material with a lighter-weight, higher-cost alloy, such as Ti6Al4V, could be an economically viable option for the automotive market, because initial costs would be offset by the energy savings over the operating life of the vehicle.

The second phase of the program targeted the machinability challenges of titanium by using detailed FEM (finite element modeling) to optimize component design for manufacturability and other cost-saving preferences. The program saw a critical need to study the range of possible component designs when machining titanium alloys with carbide tools.

Simulation of the titanium machining process involved the use of high-performance computing. The goal of using HPC was to learn how to cost-effectively realize the most profitable material-removal rate when machining titanium alloys by simulating cutting performance and identifying the key characteristics that cause tool wear, according to Riley.

“Finite element modeling lets you optimize the design of components, taking into account the material that you’re using. So, to use an exaggerated example, if you’re using titanium, you don’t need to make a rivet as thick as you would if you were using nylon,” Riley said. “You can ask, ‘How do I make the geometry of this part optimally, considering not only the material but maybe also the material process I’m using?’ Do I put fibers in or not? Do I heat treat? You can optimize the geometric shape of the part for whatever your priority is—for cost, for mass, for performance or all three.”

The software used was from developers that “each had their own tools and competed against each other in that space,” Riley said. Third Wave Systems’ AdvantEdge FEM machining simulation software was wrapped with Dassault Systèmes’ Isight for building experimental designs. Isight was used to create experimental designs for distribution over a large number of AdvantEdge FEM analyses to run in parallel on the Clemson University HPC cluster. Results were then analyzed in SimaFore/OntoSpace complexity-analysis software to identify key characteristics and outliers. These simulation results were then used to complement and augment the empirical information gained through the process experimentation from the first phase of the project.

The design optimization system worked well on the titanium component—and demonstrated that it is suitable for other materials and components.

From Titanium to Composites

Unfortunately, that system hasn’t quite taken the world by storm, according to Riley, because the design side is such a small slice of the manufacturing industry.

“Ninety-five percent of manufacturers do not do product development, so the market size for the tools we put together was too small to directly benefit the supply chain,” he said. “When we came out of the lightweighting automotive materials program, it became clear that we needed to shift back to focusing on the processing side. And that’s where we’re at right now.”

BMW, as an OEM, was part of that other 5 percent, however, and was happy with the program’s result, Riley said—so much so that when BMW wanted to investigate using lightweight carbon composites to make frame structures, it reached out to NCMS. With support from the National Highway Safety Administration, NCMS is administering a joint project between BMW and the University of Delaware Center for Composite Materials (UD-CCM) to design, manufacture and test carbon-fiber-reinforced-polymer (CFRP) vehicle components.

The design of a CFRP B-pillar will be followed by the manufacturing and testing of a prototype at UD-CCM and validation of the predictive engineering tools. The goal of the program is to attain equal or better occupant safety performance, compared to what is provided by equivalent vehicle components on the market today, while reducing weight.

Lightweighting is just one area where NCMS has been doing what it does best for 30 years, Riley said, namely, “creating a space where all of the manufacturing sectors can come together, collaborate and compete.”