Made in America: repeatable precision

Henry Repeating Arms Co., Bayonne, N.J., sells collectable repeating rifles and vows its products “will only be made in America or they won’t be made at all.” Helping fulfill that pledge is Lesleh Precision Inc. (LPI), Belle Vernon, Pa., which machines aluminum-bronze receivers and trigger plates for Henry Repeating Arms’ version of the 147-year-old-design, lever-action rifle that “won the West.”

LPI has been providing CNC machining services to the electrical, mining, military and other industries since 1999. About 2 years ago, following a reference from PIAD Precision Casting, Greensburg, Pa., which makes castings for the receivers, LPI began machining the castings.

The machining process that LPI developed for the approximately 7.5 "×1.8 "×1.3 " receivers emphasizes efficiency and quality. Kevin Yuhas, LPI’s manufacturing engineer, programmed the parts in GibbsCAM, noting that the aluminum-bronze casting material “makes pretty nice chips, but it is abrasive.” As a result, most of the machining is done with coated carbide tools, primarily from Iscar Metals. “We’ve had good luck using their tools with carbide shanks and screw-on cutting heads for milling,” he said.

Much of the machining is accomplished in two groups of operations performed on two Doosan Daewoo horizontal machining centers. To maximize throughput in the first set of operations, LPI designed a fixture to hold eight castings at a time. The shop enlisted PRZ Technologies, Lancaster, N.Y., a builder of hydraulic and manual workholders, to engineer hydraulics for the fixtures, which LPI’s machinist built in-house.

Key operations performed in the first fixturing include drilling an axial 0.681 "-dia. hole for the cartridge magazine and using a custom solid-carbide, through-coolant drill applied at 2,000 rpm and 10 ipm. Then, to accept the threaded end of the octagonal rifle barrel, a 0.702 "-dia. hole is drilled above the magazine hole and threaded with an Iscar ¾×20 thread mill. Project Engineer Tom Lofink said making the thread “is a little tricky” because it must be timed, or started, at a certain location to assure that when the barrel is screwed into the receiver at a specified torque, the flats on the barrel line up with the receiver’s top and side surfaces. Yuhas said Henry Arms provided a reference point at which he programmed the thread to begin.

Other operations performed in the first fixturing include milling of various contours, drilling and tapping. Tolerances are generally ±0.002 ".

When the operations on the first machine are complete, the receivers are loaded into a vibratory deburring unit where they are tumbled in a ceramic medium for about 30 minutes. 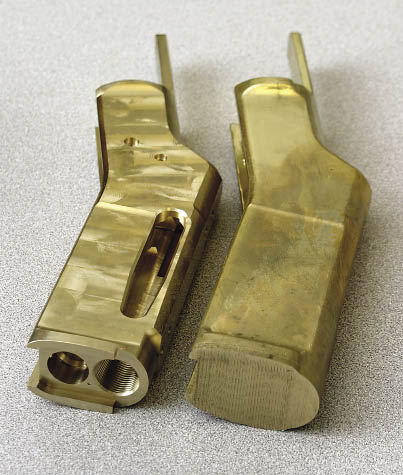 Courtesy of B. Kennedy

In a process that includes custom fixtures and tools, Lesleh Precision machines an aluminum-bronze casting (right) for the receiver of a lever-action rifle.

In the second HMC, a fixture holds four receivers at a time. Contours of the receiver sides are milled with an Iscar 1¼ "-dia. endmill tooled with two inserts and run at 4,000 rpm and 33 ipm. Yuhas said the cutting parameters are “not particularly fast” and were chosen to minimize vibration generated by the relatively large tool and thereby preserve surface finish. Next, a ½ "-dia., solid-carbide, ballnose mill radiuses the edges of the receiver at 9,000 rpm and 120 ipm. The tool runs fast “because we can,” Yuhas said. “We just kept pushing it and settled on something where we weren’t getting a lot of tool wear and it was getting done fast.” Other operations in this fixturing include drilling and tapping bolt holes in the sides of the receiver.

In the first fixture, an Iscar 5⁄16 "-dia. interchangeable-head milling cutter plunges into the part to cut a 0.530 "-wide × 2.90 "-long ejection port slot and put a 0.040 "×45° chamfer on the slot edge. The endmill also machines some details in the receiver interior.

In the second fixture, LPI employs a custom T-shaped, 2-flute keyseat cutter manufactured by Custom Tool and Grinding, Washington, Pa., to cut an interior slot that provides clearance for the rifle lever. The flutes span a diameter of 0.750 " but are only 0.480 " wide × 0.188 " thick, enabling them to fit through the 0.530 "-wide ejector slot cut in the previous fixturing. The tool is stationary when it is moved down through the ejector slot, spins to cut the clearance feature and then is stopped for withdrawal. Yuhas, who designed the cutter, said, “It doesn’t run real fast–1,000 rpm and 7 ipm–due to its small 0.250 "-dia. shank.” A 3mm-dia., 2-flute endmill with a relatively long 1¾ " reach then finishes interior details.

A locking bolt slot inside the receiver features square shoulders that can’t be cut with a round endmill, so the receiver next goes to a punch press, where it is clamped in a hydraulic fixture for broaching. “We get the slot as close as we can with the endmill, but broaching is the only way to make the square shoulders,” Lofink said. “We go down in one shot with an M-2 steel broaching tool from Anchor Danly Co.” The tool cuts the square corners and 0.005 " to 0.006 " from each side of the slot.

Finally, the receivers are put in a programmable Pannier Corp. engraving machine, where each one is marked with an individual serial number.

Total cutting time per receiver is 44 minutes, but a part is completed every 18 minutes because of the way they are cycled through the HMCs. CTE