When it comes to machining large workpieces, Norman Besand’s definition of large is any piece that requires a crane to move. “When you start getting parts that you can’t lift, to me, those are large,” said the shop superintendent for American Machine & Gear Inc.

The Portland, Oregon, job shop has several cranes, including one with a 20-ton capacity, he said. AMG primarily serves the steel mill and paper and pulp industries and produces parts up to 12' long × 5' tall and gears up to 60" in diameter, as well as significantly smaller items. “It runs the whole gamut.” 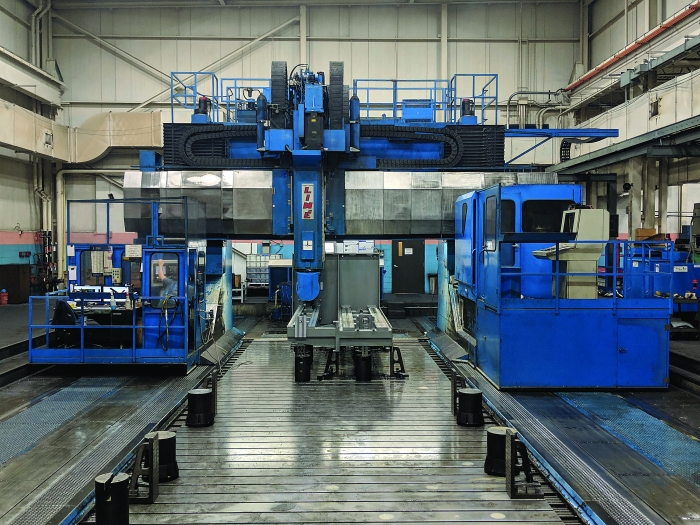 Besand added that AMG also rebuilds gearboxes and recently completed one weighing about 30,000 lbs. in about six days. When customers are “under the gun” to quickly get a gearbox up and running, “we do as best we can to run around the clock.”

All in the Family

Lincoln Park Boring Co. is another manufacturer of large parts that understands the importance of timely delivery, said Gary C. Yesue, vice president of the Romulus, Michigan, job shop. This is particularly critical for some small customers, which may not have another project to work on without the parts from LPB.

To meet delivery requirements on parts that can take 400 hours or more to produce, President Rick Yesue said he and his brother, Gary, take the time to properly plan and process each job. That begins with the complex task of estimating the requirements and costs. (Rick and Gary’s sister, Nancy Yesue, is also a co-owner.)

Their father, Richard Yesue, founded LPB in 1956 in Lincoln Park, Michigan, and mainly served the automotive industry. When his children took the shop management reins in 1984, “we went from being a shop that did all sizes of parts to concentrating on larger boring mill-type parts,” Rick said.

“We make the parts for the machines that make the parts,” Rick said, noting that LPB’s parts include machine beds, columns and heads. “That’s the easiest way to put it.”

For gigantic parts, LPB has an Henri Liné heavy-duty gantry Promill vertical boring machine with five-sided capability and 10' under the spindle. The travels for the X, Y and Z axes are 480", 204" and 120", respectively.

Not only is the footprint massive for the shop’s largest machine—so is its foundation, which has 750 cu. yd. of concrete. “That was 75 trucks lined up, all pouring in one monolithic pour,” Gary said. 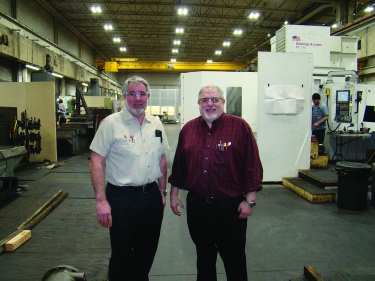 LPB set up a newer type of foundation when it installed a Fives Giddings & Lewis RT 130 horizontal boring mill with a 5.1"-dia. spindle last year. Rick said the shop chose a vaulted foundation. “It’s a foundation within a foundation.” After the rectangular pit is created, Unisorb isolation material is placed on the bottom and sides, and then the foundation is laid. He added that the shop’s foundations are generally 50 to 100 percent thicker than the builders’ recommendations.

To move parts for that and other large machine tools, LPB has nine cranes, including a couple with 60-ton lifting capacities. Rick emphasized the importance of safely handling and moving such large parts, and the company has its cranes, chains and straps inspected biannually.

Although the parts are often large, with 2-cu.-ft. ones being the smallest, tolerances are typically tight, Gary said. So the 60,000-sq.-ft. shop is temperature-controlled to ±1.5° F from the crane rail down.

“Undoubtedly, the coefficient of thermal expansion has more effect the bigger the part you do,” Rick said. “It’s really hard to get parts flat within 0.001" when your parts are 500" long.”

In addition, LPB generally requires the machine tools it purchases to achieve tighter tolerances than standard models. “Most are ordered as specials to hold closer tolerances to push those machine tool builders to the max,” Gary said. 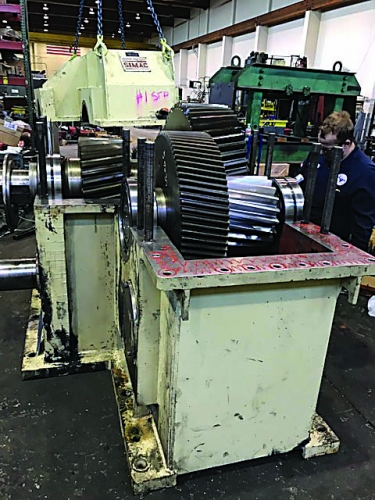 When it comes to producing large parts, being able to inspect them properly is essential, according to Blake Conner, general manager for CBM Precision Parts. The Bessemer City, North Carolina, job shop specializes in machining and fabricating parts that range from the size of washing machines to 400"×155"×116" and weighing about 50 tons for a variety of industries, including power generation, mining and aerospace.

“I think that’s the most important thing. Most people don’t have QC for the big parts,” he said, adding that the shop inspects parts with Faro laser trackers and Scan-
Arm laser 3D scanning devices. “With the bigger parts, you kind of have to have the inspection equipment come to the part. If you buy a CMM big enough, it costs $5 (million) or $6 million and it’s a waste of money.”

CBM holds tolerances as tight as 0.001" on numerous parts and stress-relieves a lot of multiple-piece weldments before machining, Conner added.

Besand said AMG outsources multiple-piece fabrications for stress relief, such as a gear with a rolled outside ring, a hub and plates that serve as webs. “Anytime you fabricate something like that and then start cutting it without stress relieving, you really run the risk of things moving around. Anything that is just a blank hunk of steel, the machining itself will stress-relieve it, and that’s all we do.”

Because the machine tools and grinding machines that produce big parts tend to be large and therefore fairly expensive, it’s important to maintain them well. 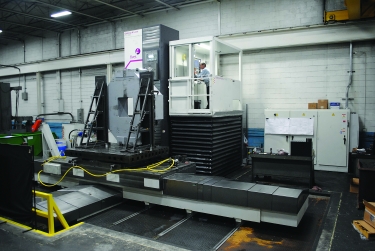 He pointed out that the shop served about 150 customers last year, with the largest one representing roughly 20 percent of business.

LPB converted some of its older large machines to CNC, Rick said. The conversions enhance the machines’ functionality while enabling them to still be operated manually and cut the time for programming when creating basic part features.

Other older equipment continues to be operated manually, including a Monarch lathe with a 31" diameter × 60" travel that was built in 1942 and is used occasionally for in-house turning purposes, Gary noted.

Whether a part is produced on an older or a newer machine, it should be able to be machined efficiently. Like a large percentage of part manufacturers, LPB works with customers to improve the design of parts so they are easier to machine. Gary added that the shop also will recommend changing the workpiece material, when appropriate, without changing part functionality. For example, it might make more sense to select 4140 steel instead of cast iron to overcome a porosity issue or when a part requires flame hardening that’s more evenly distributed.

“I’m quoting a large weldment right now that’s probably 120 sq. in., and it was supposed to be A517, a more expensive grade of low-carbon steel,” Rick said. “After talking to them, we were able to reduce the cost to a more normal A36 low-carbon steel, and their engineers feel that it will still meet the specs they want in the end.”

Also similar to many other manufacturers, LPB, which has around 30 employees, finds it “extremely difficult” to find and hire people with the right skill sets. After two machinists left the company because of health reasons, Rick said LPB hired replacements about six months ago following a year-plus search. “It’s the same thing everybody else is fighting.”

To help bring younger skilled workers into the fold, Rick said LPB and other local shops have collaborated with Schoolcraft College. “We try to help them out with what we think they should be teaching.”

Nonetheless, well-trained graduates and even veteran machinists may not be a good fit when part sizes leave their comfort zone. “A lot of people are really scared to work on some larger parts,” Besand said. “It’s intimidating to them at first.”

CBM’s Conner concurred that there’s a whole mindset and different approach to machining large parts compared with more conventional sizes. “We bring guys in who are used to doing small parts, and you have to have a quality control plan and really see it through,” he said. “Otherwise you have an expensive boat anchor. Your workforce needs to be talented and have many years working on larger parts.”

Setup is one element of large-part machining that dissuades many people from gravitating toward those applications, according to Michael Cope, product technical specialist for machine tool builder Hurco Cos. Inc., Indianapolis. “You’re going to spend a lot more time in setup and preparation than you will actually cutting the part many times. Most people, myself included, don’t like running large work because of that. When you start talking gauge blocks and clamping fixtures, everything gets bigger and more complicated.”

Specializing in large-part machining, however, can keep a shop busy. That’s the case at LPB, but Rick emphasized that the shop isn’t content to rest on its laurels. “My dad was always talking about the next machine we were going to buy and used to say, ‘The world is always turning, and when you are standing still, you’re falling behind.’ If
you don’t keep going, you don’t stay up with it. You are either falling behind or keeping up. There is no standing still.”

Double Column for the Big Stuff

Besides dual columns, Hurco’s Michael Cope, a product technical specialist, said machine tools for producing large parts need to be rigid, offer a high level of torque in the spindle and have adequate tool magazine capacity. “Those machines are typically available in CAT 50,” he added. “Speed becomes less important, and rigidity and power become more important.”

To potentially reduce the number of setups when machining a workpiece that usually requires a crane to move, one DCX model is available with a 5-axis head. “Once you have the part leveled, planted and squared up, you want to hit as many sides as you can,” Cope said.

After Hurco introduced the initial DCX model, it added a smaller version and two larger versions. 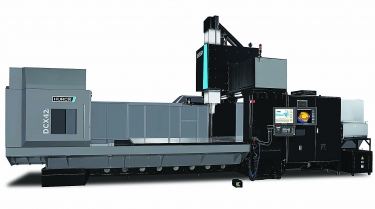 “We’re fortunate to have good relationships with our customers,” said Marketing Manager Maggie Smith. “In many instances, a customer who wants the versatility and usability of the Hurco control will mention he needs a larger machine to make a specific part. We take these customer requests seriously. If market data supports segment growth and it is a viable option, Hurco is responsive to adding those types of machines.”

For those looking to take a horizontal approach, Hurco offers its large HM1700Ri horizontal mill and the HBMXi boring mills.

No matter what type of CNC machine is used for big parts, stress relieving before the finish pass is critical. “I learned about the importance of stress relieving early in my career when I was a machinist at a job shop,” Cope said. “It was on a lathe, but it was still a very large part. I had done some very close-tolerance work, the part looked beautiful, and everything measured just right until I unclamped it from the chuck. And then it went egg-shaped. That was the first experience I had with stress relieving, and the lesson applies to parts machined on mills as well.”

Stress relieving, Cope explained, might require roughing five sides of a part, then taking another complete roughing pass to remove more material and allow the part time to complete its movement before beginning the finishing operation. “Then you are machining it once it is relieved.” 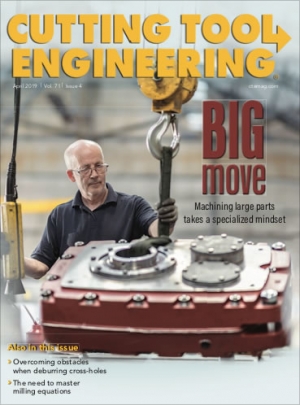