Are your spindles cutting most of the time? Or are they often idle because you’re getting ready to cut?

If you answered yes to the latter, consider the lift that an automated pallet-handling system could provide. These systems allow pallets to be set up and moved into position while workpieces on other pallets are being machined.

“By disconnecting workpiece setup and part loading from the actual machining, these systems allow our customers to see up to 95 percent spindle utilization on their machines,” said David Ward, product marketing manager for Mason, Ohio-based Makino Inc.

Makino’s MMC2 automated material-handling system links Makino horizontal machining centers, pallet loaders and operators. A servo-controlled vehicle transports pallets via a rail line. Pallets ready for machining are delivered to a machine, if one is available. If not, the pallets are placed in a storage area. 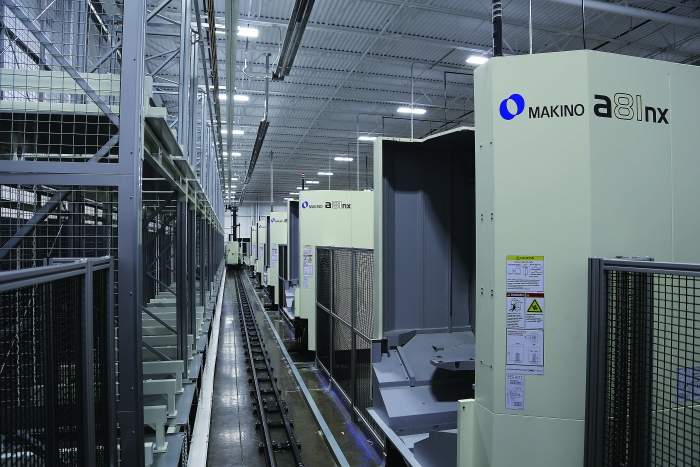 The MMC2 can be expanded incrementally to incorporate additional Makino HMCs (systems installed in North America include up to 10 machines), as well as more pallet-storage and work-set stations.

The cost of a customizable MMC2 can vary greatly. However, potential buyers can probably expect to pay about 75 percent of the amount they paid for the machine tool itself, according to Ward.

Einberger added that an MMC2 can almost double a machine’s production capacity. The MMC2 can feed multiple machines operating simultaneously. In addition, each machine can be set up to manage its own job independently of the others.

Running the show in an MMC2 cell is the PC-based Makino Advanced System-A5 (MAS-A5) control, which handles a variety of tasks. For one, the MAS-A5 monitors and manages the cutting tools in every machine in a cell. If a tool breaks while a machine is running a No. 1 priority job untended, the control instructs the machine to switch to a backup tool. If none is available, however, the control will check to see if the required tools are available to run the No. 2 priority job. And, if necessary, “it will cycle through all its jobs until it finds something it can run to keep that spindle turning,” Ward said.

Recently, Makino added a kitting function to the cell control’s capabilities. Common among aerospace suppliers, kitting is a practice in which separate but related items are grouped, packaged and supplied together as one unit for parent elements, such as a wing or fuselage. With the kitting function, Ward said, users can define a set of parts and tell the system how many sets are needed, when they are needed and when the work should start.

The MMC2 has traditionally been used with the company’s 4-axis HMCs. But Makino recently introduced an MMC variant that works with one of its 5-axis machines.

A new entrant in the pallet-handling field is the HS Flex from Hermle Machine Co. LLC, Franklin, Wis. The HS Flex is so named because it’s a flexible automation system capable of handling different-size pallets, explained Gunther Schnitzer, vice president of sales and engineering.

The HS Flex is aimed primarily at job shops, as well as the aerospace and mold and die industries. A standard system without customization costs around $150,000.

With its two doors open, the HS Flex can be paired with a machine tool to produce a fully automated cell that can operate untended. Close the doors, however, and the HS Flex’s pallet-handling shuttle can no longer reach into the machine’s working area. This allows an operator to use the machine as a stand-alone unit.

The HS Flex features Hermle software to automate pallet handling, while also making tasks easier for operators. For example, the software’s drag-and-drop functionality allows users to actuate the transport process by clicking on a pallet and moving it into the machine on the screen they are viewing. 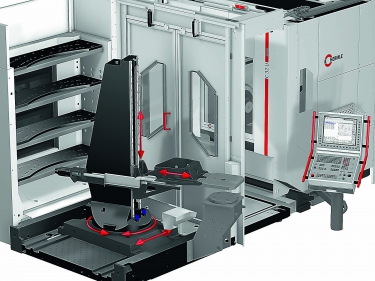 The HS Flex system can be added to Hermle machines such as the C32, shown here. The arrows show the axes movements of the system’s shuttle. Image courtesy of Hermle Machine.

The current HS Flex is limited to pallet handling, but “we are already working on it so that it will be able to handle parts as well as pallets,” Schnitzer reported.

While the HS Flex and MMC2 are designed to work exclusively with one manufacturer’s machine tools, that’s not the case with the Fastems Flexible Pallet Container (FPC).

“Our product is ‘agnostic,’ so you can hook it up to machine tools from many different suppliers,” said David Suica, president of Fastems LLC, West Chester, Ohio.

Suitable for 5-axis HMCs, the FPC pallet-handling system is a shipping-container-sized unit that arrives at a customer’s facility ready to install. The unit occupies only a fraction of the floor space taken up by a traditional pallet pool, according to Fastems.

To expand the system, users simply buy another FPC unit and hook it up to the original. Up to three extensions are allowable, for a total length of about 47.2m (155'). If the length were longer, it would take too long for the crane to get from one end of the system to the other, thereby slowing production, Suica explained.

Though the FPC is relatively small, its pallet-handling prowess can have a big impact on machining operations, according to Suica. “With no [pallet-handling] system, most people’s spindle utilization rates are in the teens or low twenties,” he said. “When we integrate a system with your machine tool, your spindle utilization rates go up to well above 85 percent, giving you three to four times the productivity from your machine tool.”