Automation isn’t just a boon to complex, multiple-machine manufacturing processes. It can also give a major boost to processes that involve only a single machine.

As the name implies, a single-machine automation system is an automated feeding system specifically designed for one machine tool. That means it’s not right for situations where the user might want to add equipment later on that performs peripheral operations, such as inspection or deburring. For applications that may eventually grow beyond a single machine tool, “you would have to look at a custom, articulated robot that has the ability to feed to peripheral devices outside the machine,” said Paul Robinson, an engineering manager at Mazak Corp., Florence, Ky. 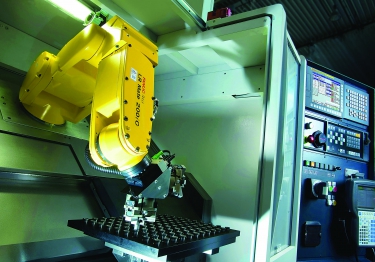 With robotic machines, production can be automated to run uninterrupted with minimal supervision for hours at a time. Image courtesy of FANUC America.

Single-machine automation systems can be a particularly good fit in small machine shops, where they take up less floor space than big linear systems that have rail-guided robots to move parts among several machines.

Consider Mazak’s Multi Pallet Pool single-machine automation system. The MPP can be configured with six, 12 or 18 pallets to meet different manufacturing needs. During manufacturing operations, a servodriven, pick-and-place robot moves pallets between the pool and the machine tool it attends.

As an example of the space savings that are possible, Mazak claims that its MPP six-pallet changer for the company’s Variaxis i-600 5-axis vertical machining center consumes about 30 percent less floor space than linear automation systems with the same capacity.

What’s more, single-machine automation systems like the MPP are easier to run and require a smaller up-front investment than their larger counterparts, according to Robinson.

Single-machine systems also have an edge when it comes to changeovers. “For a cell with many different machines and multiple robots, changeovers are costly, time-consuming and require a lot of new fixtures,” Michaels said. “Changeovers for single-machine automation systems are much easier and less costly, even if you have to retool the system somewhat.”

Making single-machine automation even more attractive are recent control improvements that allow more-complex parts to be produced by a single machine. Michaels pointed to controls on the market that can handle up to 32 different axes at the same time on a multispindle machine. On the downside, controls like this are much more expensive than less-capable alternatives, he added.

Another plus for an automated single machine is its ability to run unattended. Although a machinist would generally be needed in a cell where multiple machines are running, “an operator might go over to a single automated machine once an hour to unload parts or do a quality check,” Michaels said. Many times, automated single machines “will run processes where tolerances aren’t too tight, so you don’t necessarily need an operator tending it all the time.”

Automated single machines are also a popular choice for parts that can be finished in one operation, according to Michaels. On the other hand, he said, manufacturing processes that involve multiple operations will require multiple machines, along with a robot loader or overhead gantry-type system that picks parts out of one machine and places them into another for the next operation.

The latter processes will often be found in large machining facilities, but this doesn’t mean such facilities aren’t interested in single-machine automation as well. Michaels said many large shops will have one cell dedicated to processes that can be completed in one operation.

So, whether your shop is large, small or somewhere in between, there’s probably a single-machine automation option that’s right for you.