Proper functioning of machine tools with rotary axes depends partly on axis parallelism and the positional accuracy of the center of rotation. Early detection of problems in these areas can significantly reduce scrap and rework.

So shops should welcome a new tool designed to make machine axis checks faster and easier. Developed by Marposs Corp. in Auburn Hills, Michigan, AxiCheck analyzes measurement data collected with a probe to identify rotational problems that may impact workpieces. The goal is to reduce the number of rejected parts.

Created mainly for five-axis machines with fixed heads and rotary tables or trunnions, the AxiCheck package includes software, a calibration artifact and, if necessary, a Marposs touch probe. But the probe often should not be needed because the vast majority of machines sold today come with one, said Probing Products Manager Sharad Mundra. 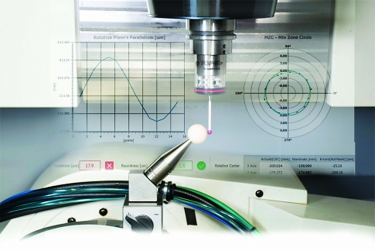 “Since you’ve already got a probe,” he said, “you can use it as an inspection or a verification tool to see if your axes and machine rotation point are good.”

AxiCheck takes measurements to determine reference values on the artifact, a unit with one or two spheres that is held in place on a machine table with a magnetic base. The artifact serves as a reference point while the probe moves around and measurements are taken.

AxiCheck software uses instructional items called macros to direct the movement of the probe and machine during the measurement process. When an AxiCheck user presses a button to start the process of establishing a machine’s center of rotation, a macro sets the machine in motion so the artifact with the single sphere can be measured in different locations. The measurement data is fed to a computer, which performs a volumetric analysis that identifies the machine’s pivot point.

In addition to checking the center of rotation, AxiCheck measures the parallelism of the machine axes to see if they are pointing in the right direction. The system can detect inaccuracies in the positioning of linear axes in real time using the artifact with two spheres set a predetermined distance apart. Like the single-sphere artifact used to check the center of rotation, this artifact is mounted on the machine and then rotated to different positions where measurements are taken.

The graphical data produced by AxiCheck can be displayed on the screen of a Windows-based computer. If a measurement is out of tolerance, the system also can send warning and alarm messages to alert a user.

Mundra said in most cases, AxiCheck would be used after a machine crash.

“Brand-new machines come pre-aligned, and you get a center of rotation,” he said. “But when a crash occurs in the user’s shop, that may change the pivot point. So you need to establish a new one.”

Mundra said the conventional way of doing this is to call in a maintenance person, who may take a day or two to find a new pivot point — time that the machine will be down.

With the AxiCheck system, on the other hand, and a probe already in the machine, “you just press the cycle-start button,” he said, “and in 30 minutes or less you will get the center point.”

In addition to checking a machine after a crash, AxiCheck can be used during regularly scheduled preventive maintenance. Mundra said this is a good idea because gear wear may change a machine pivot point every few months.

Besides its role with five-axis machines, the system can be used to check the linear axes of three-axis machines. But AxiCheck is not for machines with rotating heads. He said these present a much more complicated measurement and analysis problem than machines with rotating tables or trunnions. However, he added that Marposs is working on software for head-rotating machines.

For now, though, at least owners of fixed-head machines have a new option for fast axis checkups. 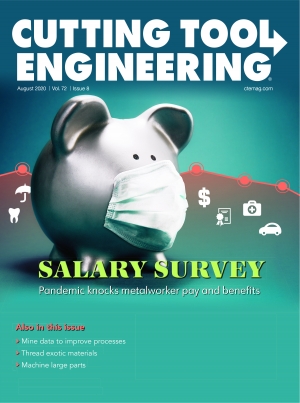