Simon Barton sounds equal parts puzzled and frustrated at the state of electropermanent magnetic workholding in the U.S. “I was at IMTS [in Chicago] last year,” said Barton, head of engineering and sales for Alpha Workholding Solutions, Statesville, N.C. “We had a booth at the back of the hall with a big VF4 Haas machine that had magnets. We did the same sort of demonstration that we did at IMTS in 1994. And I would say that of the 800 or so companies that stopped by the booth, less than 5 percent actually were users of magnets.” Many of the other visitors, he continued, responded to the demonstration with an impressed, “‘You can do that with a magnet?’” 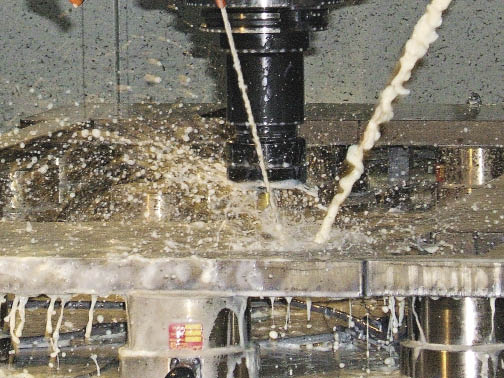 While permanent (nonelectronic) magnetic workholders have proven useful for light (12 " in diameter and less) applications, electronic magnet technology can easily handle larger jobs. About 3 " thick, the electromagnetic chucks are typically mounted on a pallet or tombstone. They range from 4 "×8 " to 6 '×10 ', and can weigh from 15 lbs. to 500 lbs. or more.

Two types of electronic magnets are available: electropermanent magnets (EPs), such as those manufactured by Alpha Workholding, and electromagnets.

EPs consist of two sets of permanent magnets: one set with poles that are electronically activated, and the other set with nonswitchable poles. Once charged with a single pulse of DC voltage, the activated magnets assume the same polarity as the permanent magnets, and the device is powered. The magnets retain their power until they’re electronically demagnetized by switching polarity. In the interim, there’s no need for connecting cables, and their portability is a commonly highlighted feature.

Electromagnets are made of an iron core encircled by an electronically charged coil, which creates a magnetic flux. Unlike EPs, electromagnets depend on a continuous source of electricity; thus, cabling is a necessity and heat is a constant. While a power outage is a threat with electromagnets, the risk can be limited with safety stops built into the controls. Electromagnets feature flexible holding power. Once charged, the EPs power can be increased, but in order to lessen clamping force the operator has to stop the operation and start over. By contrast, the electromagnet’s power can be adjusted without shutdowns.

While popular in Europe, electro- magnet workholding solutions have been slow to gain ground in this country. Some sources attribute their lackluster performance in the U.S. market to bad experiences stemming from misapplications. Yet companies that have adopted EPs and electromagnets are quick to endorse their cost savings and flexibility.

Several years ago, a North American die manufacturer (who asked to remain anonymous) launched a companywide effort to install the Alpha Workholding magnets on equipment throughout the facility, including its high-speed milling centers.

The company manufactures sheet dies ranging from 6 " to 16 ' long. It decided to adapt EPs to nearly all its machine tools, including more than a dozen grinders, 4-axis machining centers and 5-axis gantry mills.

The initial impetus for the new technology was to reduce setup time for grinding applications. For years, the company had used manual clamping systems—trap blocks, hold downs, standard studs and T-nuts in the table. Setups typically took 2 to 3 hours. With the EPs, prep time was down to 15 or 20 minutes.

Today, the company has several dozen EPs, most of them 3 "-thick incorporated into tables about 2 " wide and 14 " long, though they also have larger models. The magnets ranged in price from $3,000 to six figures, depending on size and customer requirements.

In addition to reducing setups, the company saw that the EPs improved grinding capabilities. When grinding guideways or broach rails about 3 " or 4 " wide, 8 " tall and about 170 " long, the firm was able to achieve 0.0002 " or 0.0003 " accuracy using magnetic holding. The company reported that such precision would nearly be impossible with a mechanical setup.

One problem Alpha Workholding takes special measures to eliminate is chips adhering to the workpiece. “We can manipulate our [magnetic] poles—putting magnetism where we want it and not where we don’t—in such a way that if people are drilling, turning or machining around the edges, chips won’t be a nuisance,” Barton said. “Somebody can send us a print, so that we can model that part and the magnet that we recommend for the application; we can then determine the [needed forces] and basically give them a guarantee that the part won’t move or vibrate, and there will be no problems with chips.”

Last September, at its Warner Robins, Ga., facility, forklift attachment manufacturer Cascade Corp. added a Wen Technology permanent electromagnetic workholder as part of a streamlining project. Cascade adapted it to a newly acquired Mazak VTC655 vertical machining center. The aim was to make the equipment as autonomous as possible to enable one operator to oversee both the Mazak and an OKK machining center, which has pneumatic workholders.

“We make hydraulic attachments for forklifts,” said Ricky Schnable, Cascade staff manager. “The Mazak is for machining mounting holes into the side shifter. These holes are for mounting a new product introduced last year called a fork positioner, a device to locate the spread between forks.”

Dr. John Powell, president of Wen Technology Inc., Raleigh, N.C., explained that the magnet for the Cascade application holds the side shifter’s “steel rails with a section shaped like an S, which includes several different sections and a range of lengths. These rails require selective machining and drilling, and need to be presented to the spindle so that the diagonal portion of the S is at a controlled angle near vertical.

“We provided a customized, single-piece magnet that covered the machine table with four strips of magnetic poles running down its length. To support the part, machinable rails were installed along these magnetic strips, which are machined to fit the sections. Since there are no clamps between the parts, they could load four parts at once on a smaller machine—or twice as many as they could with mechanical clamping.”

With no clamp obstructions, deburring of the pieces is performed automatically inside the Mazak vs. manually outside the VMC. “That helped to eliminate operator involvement and was one of the things that sold us on the permanent electromagnets,” Schnable said.

Another feature of the Wen technology that proved attractive to Cascade is its ability to wash off chips in the machine. “We had Mazak add an M-code to control the magnets on and off,” Schnable said. The control “can actually demagnetize the part while it’s inside the machine, turn on the coolant, run it across the part, clean it of chips and wash off the table, so operators don’t have to clean fixtures when they come out of the machining center. This was another step that helped to eliminate operator involvement so they can run two machines. Also, operators don’t have to do clamping. We were accustomed to working with big, bulky clamps that had to be tightened down.”

One of the latest developments in EP technology is Wen’s dash-M control. Introduced in June, the device uses an internal microcontroller to detect problems—such as chips in the connector and crushed cables—and shuts down a machine before it short-circuits. “Our new dash-M technology is like antilock brakes or traction control for your car—a combination of avoidance and insurance,” Powell said. “The primary innovation is firmware that not only switches your chuck on and off, but simultaneously checks for fault conditions and actively attempts to protect both the control and the chuck connected to it. While the technology does not prevent chips getting into connectors, coolant in junction boxes or cables getting crushed by a forklift truck, it is effective at preventing these events from propagating into burnt controls, cooked chucks and serious downtime.”

Not all companies that opt for electronic clamping choose EPs. Some firms, such as United Grinding Technologies, Miamisburg, Ohio, are sold on the benefits of electromagnetic chucks. For the past 12 years, the company has used O.S. Walker electromagnets on its Studer CNC grinders.

“Electromagnetic chucks offer you the flexibility of varying the amount of magnetism needed to hold the part,” said Don Hayes, project manager for the Studer Grinding Div. of United Grinding. Hayes’ division focuses on providing customers with ID and OD cylindrical grinding products. Companies commonly use electromagnets to hold bearing races and mold and die components when grinding.

Hayes illustrated the technology’s flexibility with a couple of scenarios. “Let’s say you have a part with a thin wall, which doesn’t have much surface contact to the magnet and you need to crank up your holding power, or you have a part that requires less grinding force and you want to crank down your holding power pressure—you can perform either with an electromagnet. It gives you more flexibility from part family to part family.”

Variable magnetic workholding also comes in handy when working with non-linear parts, said John Knight, sales representative for O.S. Walker, Worcester, Mass. “Because they can vary the power, they won’t suck the workpiece down to the magnet and take the bow out of it, for instance.” In addition, Knight said, because the magnetic lines of flux on the electromagnet pass through air more effectively than those generated by EPs, “electromagnets are less air-gap sensitive, meaning they hold better when parts are not flat.”

Setting up an electromagnetic workholding application takes just several minutes. “Again, one of the benefits of an electromagnetic chuck is you can turn your magnetism down,” Hayes said. “So you put the part on the face of the magnetic chuck, [adjust the] dial indicator, and as the workhead rotates, you can tap the part in and center it to where you want it. Obviously, while you’re dialing it in you want to be able to tap it around so you need lower holding power then. And once you have it dialed in, you crank up the power and you can do your grind.”

United Grinding integrates the electromagnetic chuck into its Studer controls; the two pieces of equipment, in effect, talk to each other, Hayes said. “For instance, if a chuck were to lose electrical supply or a part became loose, the machine would go into an E stop and retract. So the machine is always monitoring [an application]. When the machine is grinding, you cannot deactivate the magnetic chuck; it’s locked out. So even though we buy a controller, the magnetic chuck and the entire package from O.S. Walker, we integrate it into the machine so it becomes one. You cannot do a cycle start on the machine unless the chuck is energized; the two communicate back and forth, and that’s all part of our [own] safety links.” The ability to integrate the two pieces of equipment added to the Walker electromagnet’s appeal. “The big thing I would say about the chucks is that they allow a lot of flexibility,” Hayes said. CTE

Daniel McCann is a former senior editor of Cutting Tool Engineering. Questions or comments may be directed to alanr@ctemedia.com.