A twin-spindle lathe with built-in robotic automation has been revamped to offer faster and easier setup and operation than its predecessor.

An upgrade to the CSD-300 from Fuji Machine America Corp. in Vernon Hills, Illinois, the CSD-300II front-facing, twin-spindle lathe sports a variety of new and improved features.

One of these is a new Fuji robot for automated machine loading and unloading. Fuji is one of the few machine suppliers that builds robots into its standard machines, said Frank Tortorich, vice president of sales and service. He said automation helps users boost productivity, achieve a faster return on investment and deal with the ongoing labor shortage in the machining industry. 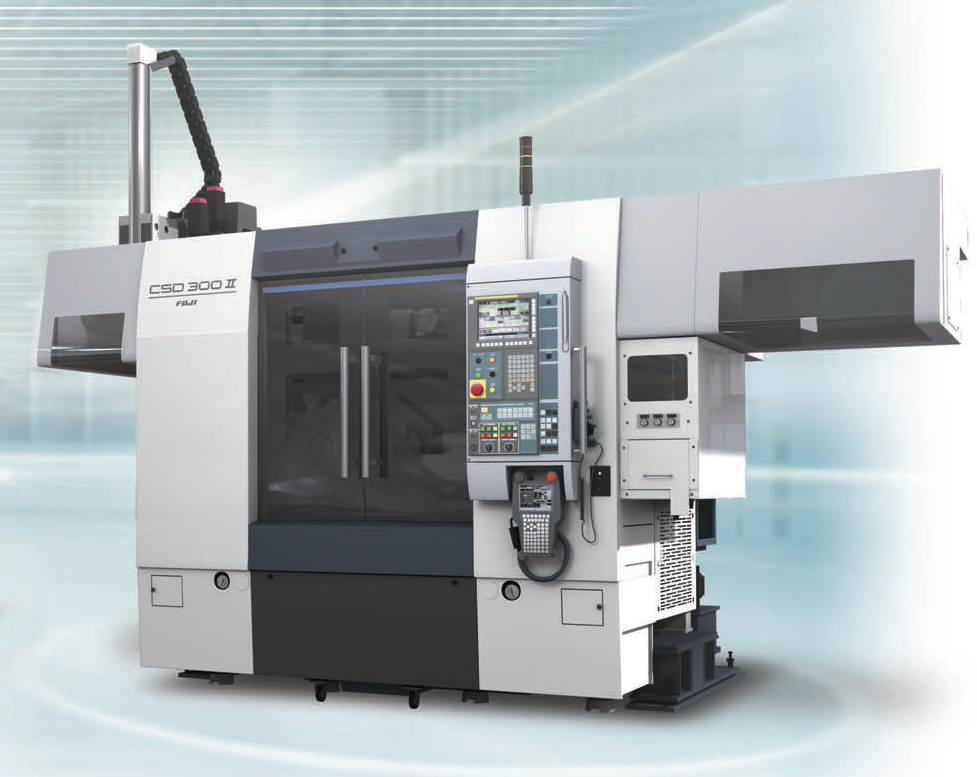 The new CSD-300II lathe-robot combination is an upgrade over its predecessor in features and capabilities. Image courtesy of Fuji Machine America

The compact CSD-300II — it has a 2,260 mm × 1,980 mm (89"×78") footprint — can be equipped with a dual-gantry robot that can handle 5 kg (11 lb.) parts measuring 200 mm in diameter × 100 mm (8"×4"). While the standard single-gantry robot can load or unload only one part at a time, the dual-gantry robot has two units working simultaneously to load or unload parts for both of the lathe’s spindles, which increases processing speed. Despite the significant increase in capability, he said the new robot is lighter than its counterpart on the CSD-300 and is equipped with
improved hardware and software.

Fuji touts the fact that the CSD-300II offers faster robot traverse and turret indexing speeds than its predecessor. The lathe can achieve turret index times of 0.19 second, robot cycle times of 17.9 seconds and loading times as fast as 4.8 seconds, according to the company.

Tortorich attributes the CSD-300II’s increased speed to a new turret design featuring a curvic coupling-style clamping and indexing system. (Curvic coupling refers to connection members with curved teeth spaced circumferentially around the face.) Besides speeding up indexing, this system, which replaces the cam box-style turret on the CSD-300, boosts turret clamping force and cutting rigidity, he said.

The CSD-300II “is completely controlled by a Fanuc 0i-TF control,” Tortorich said. “That makes setup and operation easier for Fanuc users because there’s no learning curve for Fuji Max control.”

For users who want to connect the CSD-300II to the internet of things, Fuji offers its Lapsys software as an option. Lapsys reads scanned laser etchings to trace the origin of parts. It also allows 24/7 monitoring of the machine and spindles from a remote workstation or cellphone, which can enable off-site diagnosis of problems and predictive maintenance.

With the software, “you can see what machine a part was made on and the date it was made,” Tortorich said. “You can also see if the machine is in an alarm state or in production and how many parts it produces.”

In addition to its built-in Fuji robot, the CSD-300II includes in-process auto-gauging and custom workholding from Fuji. This allows the company’s engineers to guarantee the system’s takt time, cycle time and Cpk.

“We specialize in turnkey solutions,” Tortorich said, “which makes us different from the commodity world.”

Although it can meet the requirements of a variety of applications, he said the CSD-300II is especially well suited for medium-mix, medium-to-high-volume production for the automotive industry.

“In automotive, you may be making hundreds of thousands of parts per year,” Tortorich said. “Our machines are designed to work 24/7 to achieve those results with high quality and high performance.”