For as long as there have been parts, they have needed to be marked. The tools used to accomplish this include permanent markers, adhesive labels, electric engraving pencils, rubber stamps and ink pads, metal stamps, ball-peen hammers and electrochemical etching machines.

There is no shortage of ways to mark parts. Laser marking, however, is faster than any of the methods just mentioned and more permanent than most. Best of all, it’s simple: Just properly place the workpiece in the marking machine, close the door, and the text, serial number, logo or bar code that had been keyed into the device interface will be transferred quickly to the part surface via a laser beam. 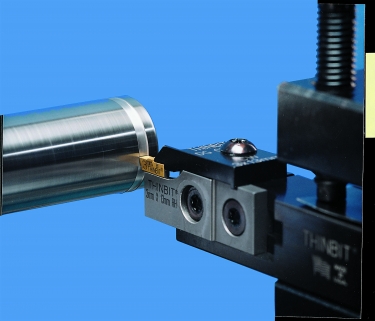 The biggest downside to laser markers is the price tag, potentially costing up to hundreds of thousands of dollars. Also, the lasers of yesteryear were difficult to operate and needed routine maintenance from a trained technician. Many people in the industry assume that situation is still the case.

The Case for Outsourcing

Ken King began laser marking when those drawbacks were far more significant than they are today. The COO at Kaiser Tool Co. Inc., Fort Wayne, Indiana, is responsible for the company’s marking division, Laser Images, which performs laser engraving.

According to King, the cost of laser equipment and its maintenance requirements has come down significantly over the past 10 years. Although older lasers required intensive operator training and programming experience, newer ones typically are graphically driven and work much like a desktop printer.

Despite the lower costs and ease of use, King emphasized that adequate time is needed for experimentation to optimize the laser’s settings for speed, power, focus and frequency for each material. 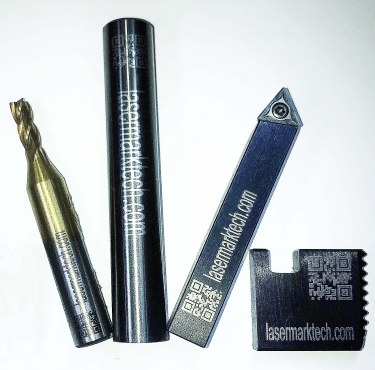 Because they don’t raise the part surface, lasers are often the first choice for marking carbide tools. Image courtesy of Laser Marking Technologies

It’s also important to select the right kind of laser. Some highly reflective materials do not absorb enough energy to allow the laser energy to change the surface. Some materials—plastic, for instance—may melt around the area being marked. King’s message is clear: For shops that need to cover a wide spectrum of materials, different types of lasers and settings may be needed.

Because of this learning curve, he encourages shops to try a laser engraving service provider before investing in their own laser marker and gaining the required experience. “Instruments, dials, wheels, scales, cutting tools and more—we can engrave workpieces of virtually any shape, size or material,” King said.

Kaiser Tool practices what it preaches, engraving each of its million-plus products with a part and lot number. This makes it easy for customers to reorder. In addition, because Kaiser Tool can track when the parts were made, on which machines, by which operators and to which print revisions, as well as quality results and subcontract information, the engraving process provides complete traceability in the event of a problem.

Traceability is one of the biggest benefits of laser marking, although its potential goes well beyond corporate quality requirements. For example, a Laser Images customer operating a food production line needed to identify a series of stainless steel trays. The customer had found that, if the trays were not maintained properly, the line could become jammed and production would cease. Once the trays were engraved with machine-readable bar codes, the customer used them to record jam events and tie information back to maintenance records, something that previously had been impossible to do.

Similar examples abound, such as in the medical industry. Medical equipment often needs serial numbers to track sterilization routines and product life cycles. Medical implants are marked to ensure they are for the correct patients and for duty tracking.

How fast are laser markers? According to Sam Palmeter, president of engineering and new product development at equipment manufacturer Laser Marking Technologies LLC, Caro, Michigan, it’s possible to laser-mark a 1⁄4"-dia. carbide tool shank in less than two seconds with only a minute or two of setup. “Perhaps more important is that we can produce a mark without raising the part surface,” he said. “Around 14 years ago, we developed a ‘recipe’ to eliminate surface raising, which is why more than 100 cutting tool manufacturers now use our equipment. You might say we cut our teeth on carbide.”

The 1,064nm fiber laser found in Laser Marking Technologies equipment is ideally suited for carbide and other metal, he said. The laser is also much less expensive to own than previous laser generations. Maintenance is about as difficult as cleaning out a toaster, and the laser is no more challenging to operate than any other computer-controlled device.

“Anyone who’s used a fiber laser knows they have an incredibly long mean time between failures,” said Rick Weisbarth, president of sales and industrial development at Laser Marking Technologies. “The unit we use is specified for 100,000 hours, but it’s not unusual to see many times that figure with no maintenance aside from keeping the lens clean.” 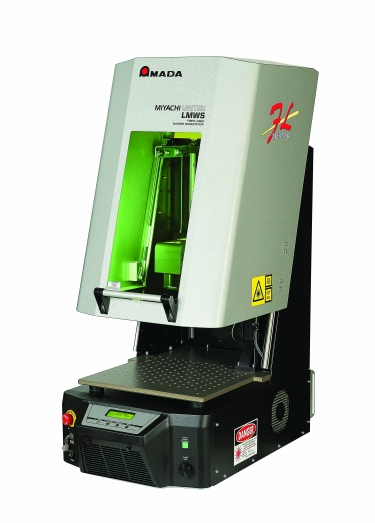 There’s more to marking than basic part identification. Bar codes, such as data matrix, QR code and PDF417, give manufacturers the ability to cram a lot of information into a relatively small area. Whereas the linear 1D bar code found on a can of green beans or box of breakfast cereal is limited to a couple of dozen characters, a 2D bar code may contain up to 2,000 characters, enough to tell a complete tale about a workpiece and its history.

Lasers make volubility fast and easy. This means that a machinist can scan the laser-marked bar code on a favorite cutting tool and know where and when it was made, who made it and how to get more. “If you use Amazon or other online retailers, you already know that you can scan a data matrix code and have the product in your hands within hours,” Palmeter said. “Laser marking gives manufacturers and their customers the ability to interact like never before.”

Laser Marking Technologies’ technology can be applied to job shops and OEMs. Ty Brock, automation specialist and laser safety officer, said the company has platforms that can communicate with SQL servers and other databases, as well as various machine tool and assembly line controllers. This ability allows the direct injection of data into the software running those machines via an Ethernet connection and allows the verification of data accuracy at any point in the manufacturing process.

Putting On the Brakes

“Consider a brake rotor for Ford, Chrysler, whomever,” Palmeter said. “They have to make sure that the proper rotor goes onto the proper car. Otherwise there could be safety issues. The best way to do this is to laser-mark each one during production with a serialized bar code. All the assembly technician has to do is scan the car’s unique bar code, scan the rotor, and the system will record what’s happening and verify that everything’s copacetic. This type of functionality is just a small example of what’s possible with some laser marking systems.”

Mark Boyle, product manager for Monrovia, California-based Amada Miyachi America Inc., sees many such opportunities—and not only with auto companies and other large manufacturers. “Normally, our equipment is used by customers doing low-volume, high-mix work,” he said. “The list ranges from medical and dental parts to electrical connectors and even mom and pop shops that need a cost-effective and flexible way to mark machined components.” 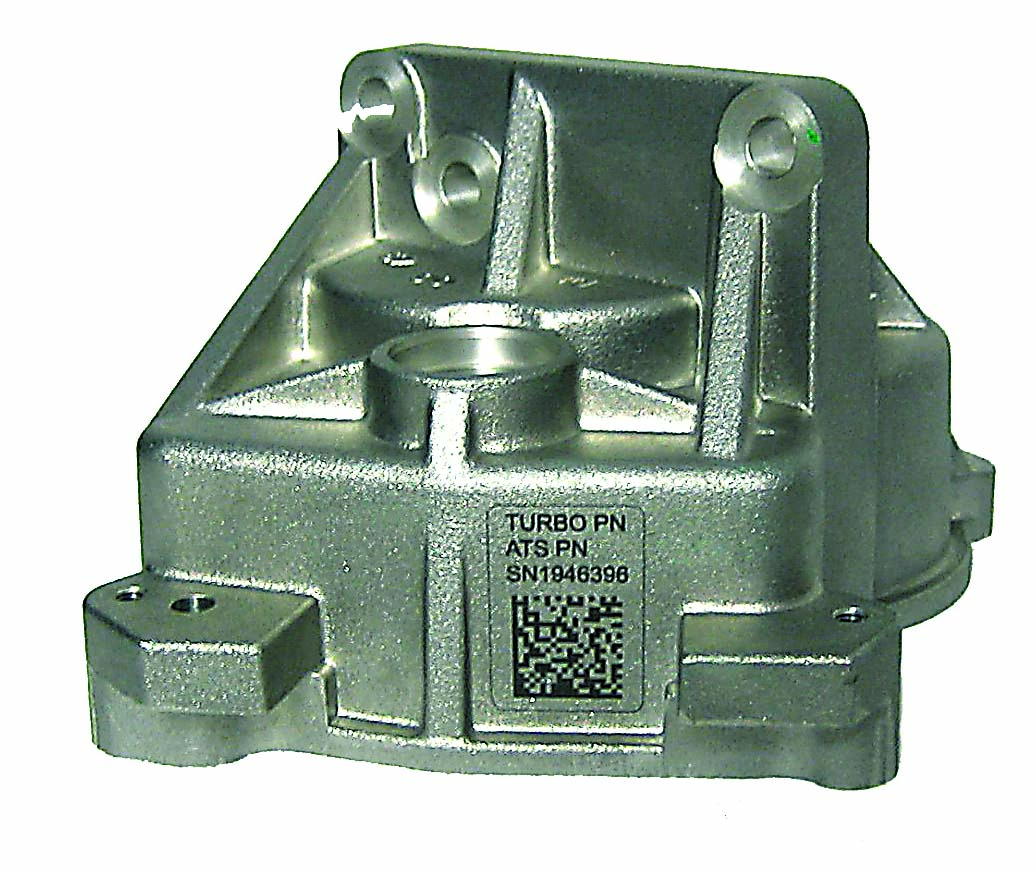 Small shops might be wondering how to set up and operate one of these machines. Boyle said it’s easier than people may think. He explained that whether the system is integrated with another piece of equipment or is a stand-alone workstation, there’s a graphical user interface of some kind and programming software that controls the timing between the laser and the galvanometer that drives it. “Once you’ve entered the data, the rest is pretty much automatic.”

The Ins and Outs

Boyle said a variety of inputs are possible. This means that someone can import a DXF or an Adobe or a CorelDraw graphics file or just type whatever he or she wants. The software then takes care of the formatting and conversion to a data matrix, if required. At that point, all that’s needed is to tell the laser what material is being marked, load the part and push the “cycle start” button.

More advanced functions, such as automatic serial number generation and interfacing to the company’s enterprise resource planning system or machine tools, are also possible. This requires a slightly higher skill level. But for the most part, it is nothing that any talented CNC programmer can’t handle.

For anyone worried about safety, don’t be. Laser marking equipment manufacturers pay close attention to door interlocks and machine enclosures. These ensure that nobody will be subjected to a dangerous stream of light, one that could blind someone left unprotected.

And back to price? “Yes, it’s definitely a bit of a step up in terms of price from a dot-peen marker, but the quality and productivity more than outweigh that,” Boyle said. “Because it’s a noncontact process, there’s no risk of damaging a workpiece. You don’t have a stylus that has to be replaced or sharpened, there are no harsh chemicals, no labels that fall off or ink that fades. On fiber lasers in particular, there are no consumables. Once you plug it in, it’s ready to go, and it goes.” 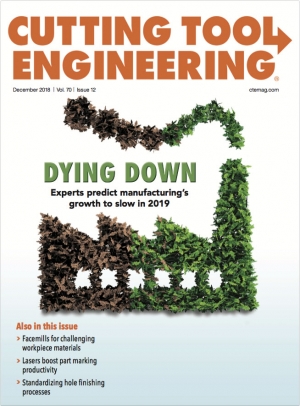