The design of the knee mill goes back to 1936, when Rudolph Bannow’s company produced a knee-and-column vertical mill with a rotating turret and sliding-ram head. The mill became known by the company’s name—Bridgeport—which, like Kleenex, became the generic signifier for mills of similar design.

Eighty years is a good run for a single design. But now we often hear that the venerable knee mill’s time must be closing. Newer, multiple-axis CNC machines that can do much of what the knee mill can—and more—will fill its niche.

But that hasn’t happened—at least not yet. The knee mill remains popular with many manufacturers. Recently, one builder of knee mills has even seen a noticeable uptick in sales.

Why does the knee mill still stand tall? 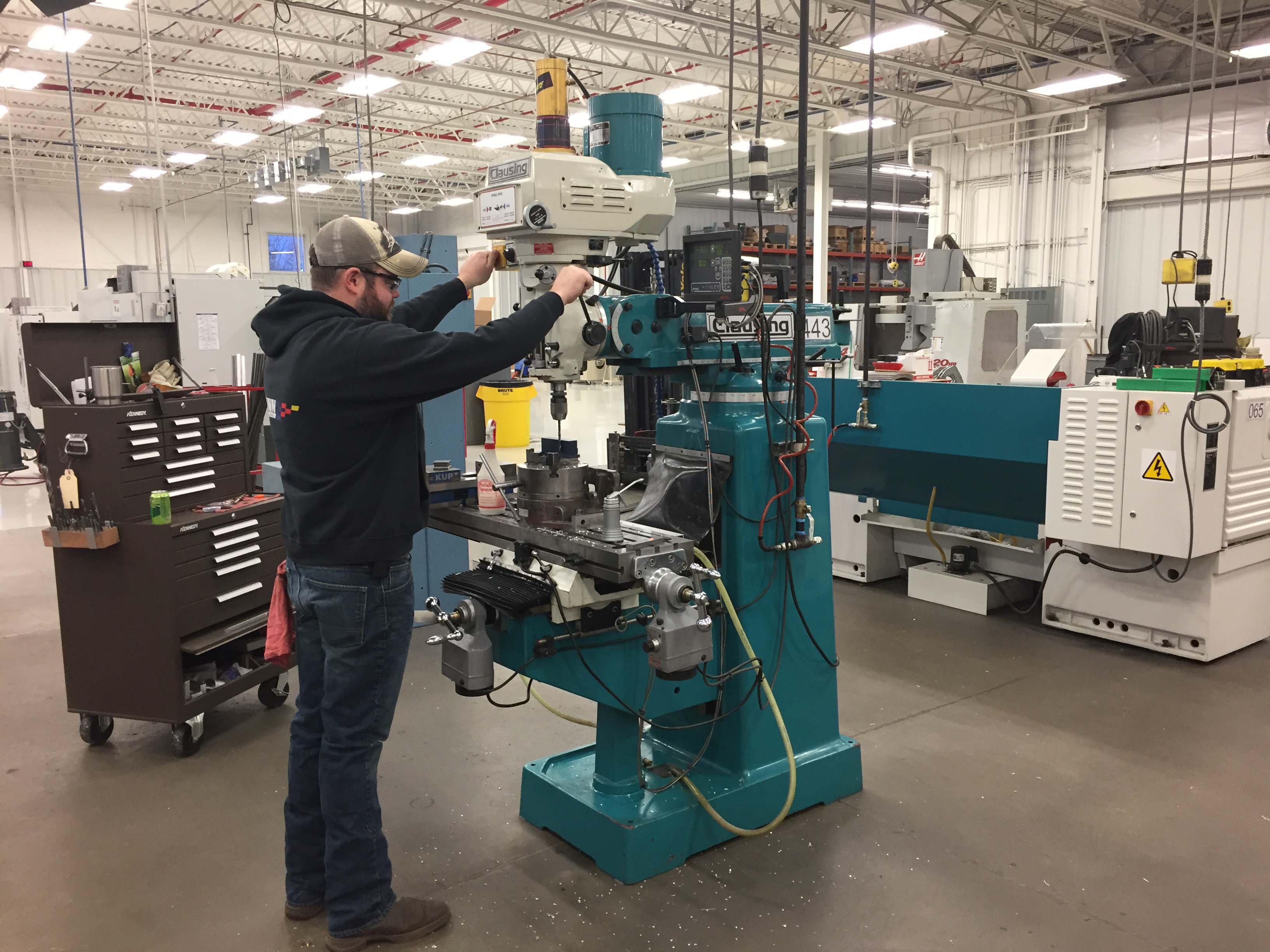 Munn Manufacturing, Freeport, Mich., uses 12 CNC mills and 11 CNC lathes for complex tooling and production runs for aerospace, heavy truck, automotive and aftermarket work. Started in 1963, the company has sections for production machining, tooling and pipe bending. About 2 years ago, the company purchased two Clausing manual knee mills “for use on jigs, fixtures and the like,” said owner Steve Buehler.

“Sometimes it’s just easier to put a part into a knee mill, pop in a couple of holes or tap something, make a little cut in it and you’re done.” Buehler contrasted that with the longer work of programming those tasks on a CNC mill. “Sometimes the knee mills are just easier for us. That’s why we keep them here.”

Kevin Mungovan, president of Clausing Industrial Inc., Kalamazoo, Mich., thinks cost is an important reason why the knee mill remains popular. “Why pay more to drill a hole than you need to? You could put a 2-axis control on a knee mill, take the part off the $100,000-plus machining center and put it on a $30,000 knee mill. Let it do what it does well—drill the bolt pattern. Let that other machine do what it does best—make chips,” he said. “We’re seeing more applications where the knee mill provides support for a CNC machining center. Or it is used for a second operation.”

That’s in line with how Munn Manufacturing uses its knee mills, according to Buehler. “Suppose a run on a CNC machine is from 30 minutes to an hour,” he said. “While it’s going on, our machinist can make other parts on a knee mill—or on a manual lathe, if that’s what is needed—instead of trying to program the tasks into a CNC mill or lathe. 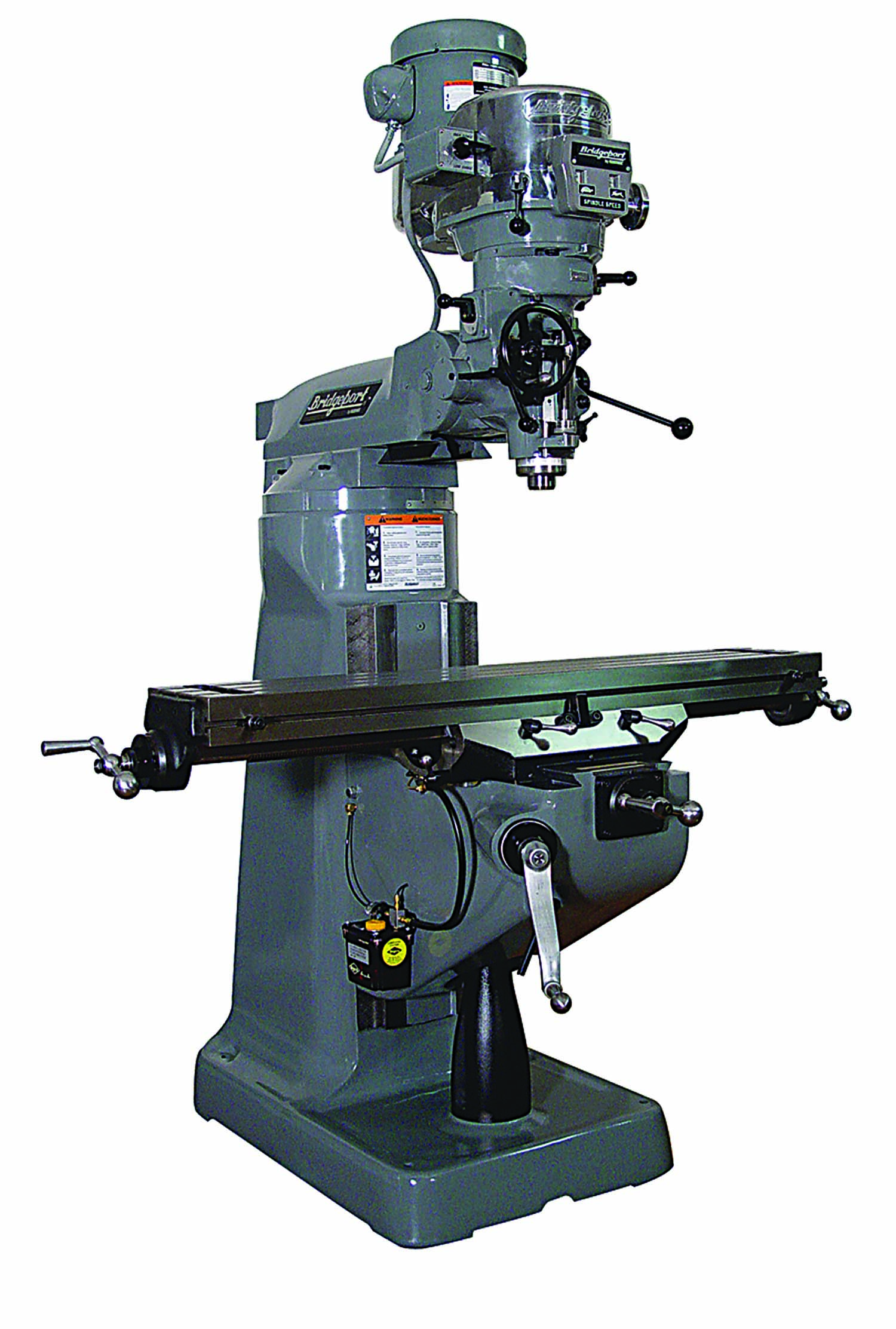 It all began with the Bridgeport, back in 1936. This is the newest iteration of the Bridgeport Series 1, made by Hardinge. Image courtesy of Hardinge.

“It’s absolutely easier,” Buehler added. “You don’t have to write code or set up tools on the CNC mill. With the knee mill’s collet, you can just put in a drill or tap or endmill. We get the throughput we’re looking for.”

This fits with what George Young, sales manager for knee-mill builder Kent Industrial USA Inc., Tustin, Calif., sees in the industry. He said manual knee mills “are still popular in most toolrooms, most machinists are familiar with them,” finding them much faster and easier than a “full-blown” CNC machining center for setting up and machining simple parts.

Kent has provided many multiple-machine installations for large companies, such as Plantronics, Gulfstream Aerospace, Honeywell, Schneider Electric and Magna, in addition to selling knee mills to many small- and medium-size job shops.

Kent makes a CNC version of the knee mill, as do others. The Kent version features “an easy-to-use, conversational control that’s ideal for small shops learning or getting into CNC machining at a more affordable starting price,” Young said. “They are also handy for full CNC shops when doing a second operation, prototyping or quick, small-lot-quantity part runs.”

Another benefit for small shops: “Many of our models can also run on single-phase power, so they can be put into a ‘garage’ shop for someone who is just starting out,” Young said.

Young pointed to the traditional advantages of the knee mill’s design to explain its popularity. “The tiltable head, movable ram and turret make the machine versatile and allow for a flexible work envelope,” he noted. “Its ‘open’ nature means an operator has easy access for quicker setups.”

Dickinson Manufacturing Solutions, Madison, Wis., takes full advantage of that open design. The company, which works with materials from plastic to aluminum, steel and titanium, employs six machinists on a single shift who use eight Haas CNC machines and a Clausing manual knee mill, purchased in 2011.

“We do everything from work for engineering firms selling specialized equipment to the oil and gas industry,” including prototypes and small-lot first runs, said founder Keith Dickinson. “We do work for the biotech industry, repair work for local companies like DuPont and low-tech work, such as all of the tap handles for startup Wisconsin Brewing Co.” 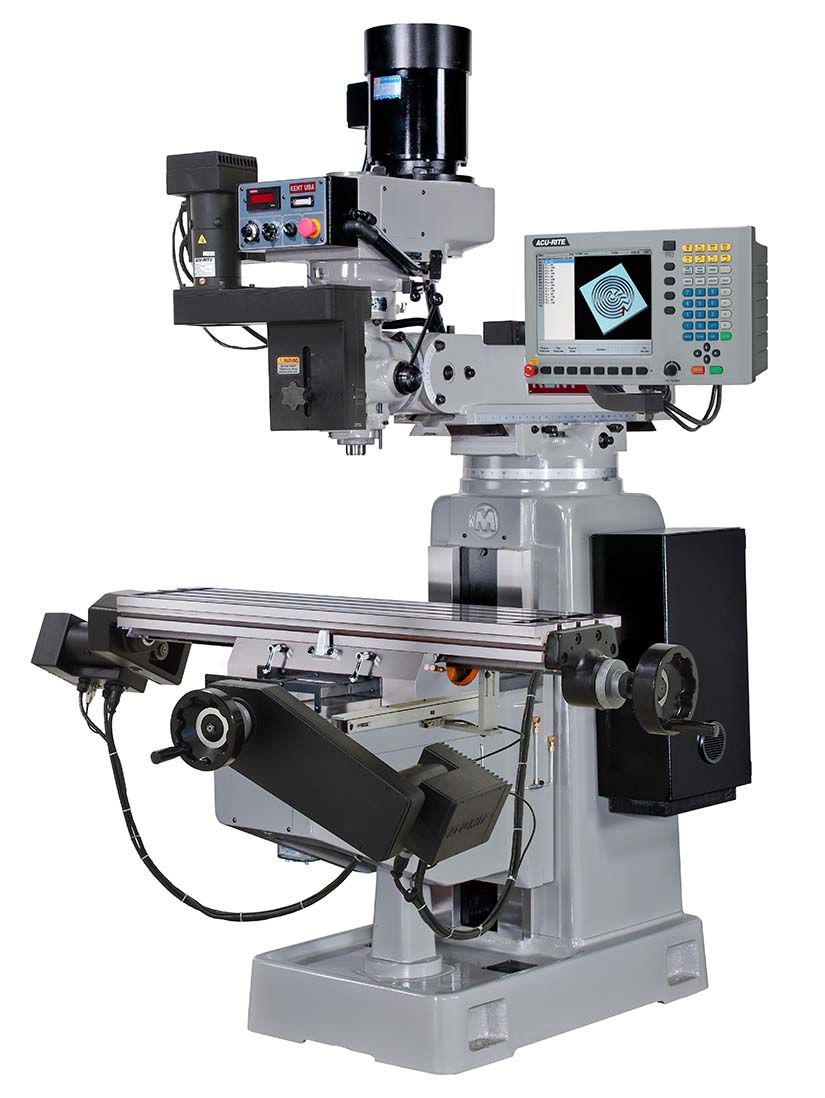 Between a manual knee mill and a multiple-axis CNC mill is a thriving niche for a knee mill set up for CNC programming. This is the Kent 4VKF CNC knee mill. Image courtesy of Kent USA.

The old-school, unenclosed design is a major source of the knee mill’s appeal. “We were doing a lot of our larger flat-panel work, like cases for instrumentation, in our [Haas] VF3s and VF4s,” he explained. But the work envelopes of the CNCs were too small and the Z travel too short for the necessary end work. “A standard VF3 has 25" in Z—you have to fit the tool in there too. Anything over 25", if you need a hole in the end of your workpiece, you’re out of luck. But on the Clausing, you can hang it off of the table and get the distance from the spindle nose to the floor to accommodate the length.” Dickinson raised the knee mill on 3"-high (76.2mm) aluminum blocks to get even more height .

The knee mill lets Dickinson use real cutting-tool engineering for another niche customer, who makes 40"-long (1,016mm) practice swords. The noncutting end of the shaft starts out square. “We made a fixture to hold the end, then back-bore it to a round, tap it and thread it.” The handle screws on to that threaded end.

The University of Wisconsin Engine Research Center had engine heads that needed a plug port opened. “If you had to fixture it in a CNC,” Dickinson said, “you’d spend at least a day on tooling. There’s $600 wasted. But you can put it up on the Clausing, tilt that head until you indicate onto a best-fit pin, and you’re lined up ready to open the hole.”

Occasionally, the company uses the knee mill for a secondary operation on a workpiece that first went into a Haas, Dickinson said. Usually, though, the knee mill is used on niche pieces that can’t be practically milled on a CNC.

It wouldn’t be worth buying a CNC with a large enough work area for some of those jobs,” Dickinson noted. “I can work on the end of a 50" plate with the knee mill. I don’t know what size machine you’d need to get 50" of travel in Z, but it would be huge. It wouldn’t make sense to buy a machine for a single application—one we don’t see that often—if we didn’t have to.”

Both Dickinson’s and Buehler’s thinking about using the simpler machine when possible makes economic sense. It is also a tenet of lean manufacturing, as first developed for the Toyota Production System, to stay as simple as possible. That means, among other things, to never buy more machine than necessary to do the job. The goal of lean is to eliminate waste in all its forms. Unused machine capacity that one has paid for is waste. 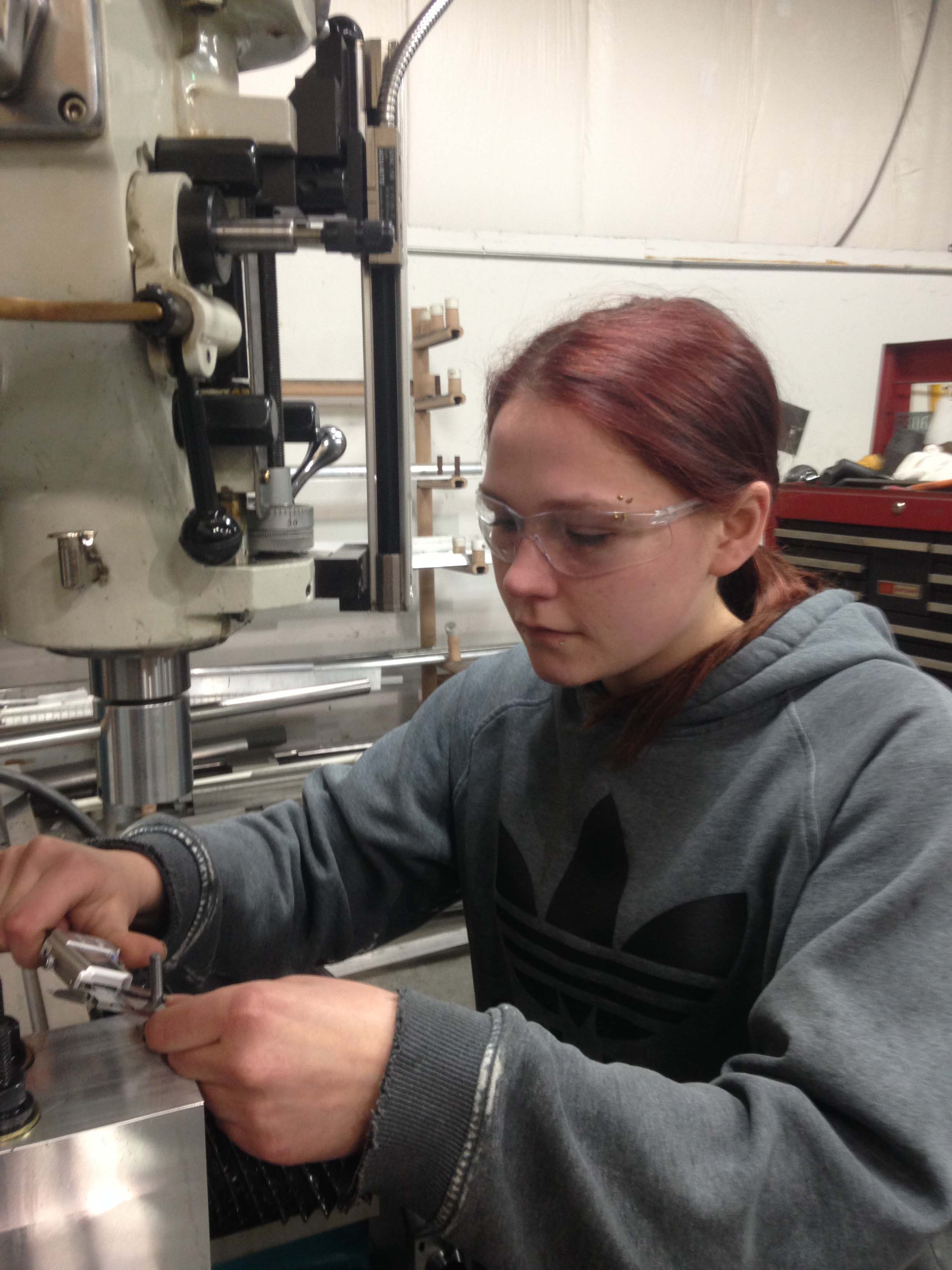 Toyota itself follows the practice in regard to knee mills, according to Clausing’s Mungovan. “We have a knee mill with a CNC on it in a Toyota plant in Texas,” he reported. “It’s in their toolroom, just for making brackets and fixtures and repair parts. Everybody is expected to learn how to program it.”

According to what the Toyota machinists told Mungovan, before the knee mill was purchased, if they needed even a simple part or prototype, “somebody would draw it up, somebody would send the drawing to a machine shop, get a quote and wait for the part to come back.” Sometimes the process took 2 weeks. With the knee mill on hand, “if something’s down, they need a little prototype, or the engineer simply wants to try something, they go to the toolroom and get it done right away.”

The Bridgeport knee-mill line, now owned and made by Hardinge Inc., is still popular, said Hardinge Marketing Manager Allan Snider. “Manufacturers buy Bridgeports for the same reason someone buys a Harley,” he said. “It’s an iconic brand known for quality. Our customers’ brand loyalty is vast.”

What accounts for the Bridgeport’s appeal over CNC options? “Versatility is the first term that comes to mind when thinking of a knee mill,” Marshall said. 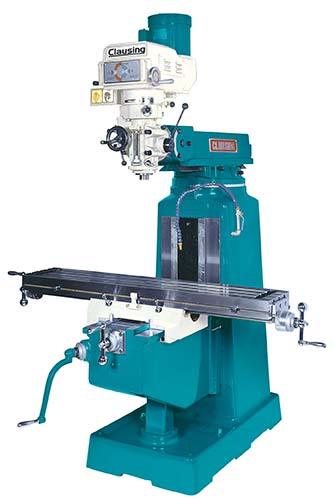 The Clausing Model 3VS knee mill is popular with educators for its ease of use. Image courtesy of Clausing Industrial.

The second is ease of use. That quality explains why—at least for Clausing—sales have not only held steady but actually increased: The knee mill is both easy to use and easy to teach. With the growing skills gap between retiring shop veterans and the new generation of workers who need training to replace them, the knee mill is a great starting point.

Clausing sponsored a national skills competition for years. By the early 2000s, though, fewer schools were participating. “One of the program heads told me that a lot of high schools were getting rid of their machine shops because of the cost of materials and liability issues,” Mungovan said. An Oklahoma vocational school teacher told him the school’s board wanted to replace manufacturing education with construction skills.

Mungovan believes some schools that dropped their machine shops are recognizing the value of good manufacturing jobs—and getting back in the game. A common early purchase is a knee mill. Mungovan has sold many to community colleges and trade schools, and also to secondary-education systems—even the military. Aside from their use in MRO, Shepherds Air Force Base invested in new machines from Clausing because, he was told, they weren’t getting recruits with any machining in high school and were having the same problem as private companies finding skilled people.

For all of these reasons, the knee mill’s near-term future seems assured. Still, multiple-axis CNC machines keep getting better. Their makers promise the day is coming when they can be programmed and tooled fast enough to replace the need for a separate knee mill.

Munn Manufacturing’s Buehler isn’t convinced. “Maybe it depends on what industry you’re working for,” he said. “In terms of the work we do, I’d say, no. There will always be times when we need a conventional knee mill or lathe because it will be the simplest way for the kind of work we’re getting from our customers.”