Ronald De Feo became president and CEO of Kennametal Inc. in February 2016, after serving as chairman of the board and CEO of industrial equipment maker Terex Corp., Westport, Conn. He has been a Kennametal board member since 2001. In an interview conducted by CTE Editor Alan Richter, De Feo discusses the past year, the business outlook for Kennametal, Pittsburgh, the cutting tool industry and the company’s modernization efforts.

CTE: What are your reflections about your first year at the helm of Kennametal?

De Feo: I’m really proud of how our team has come together to deal with some of the challenges of our business. We’ve accomplished quite a bit, starting with changing the way we are structured as a company, changing our cost structure and delivering better products to our customers at lower costs and with greater reliability, while returning a little bit more money to our shareholders and providing a better place to work for our team members. 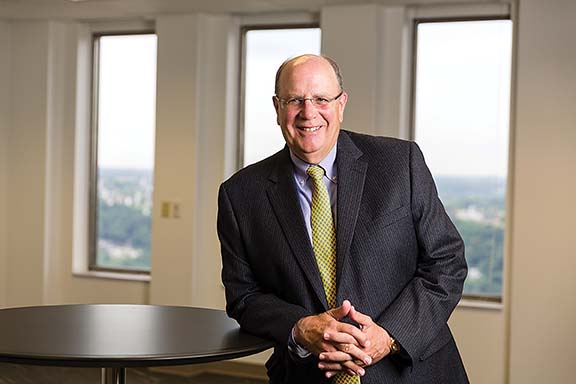 CTE: How is the performance of Kennametal’s cutting tool business?

CTE: What needs to occur to improve cutting tool sales for the overall industry?

De Feo: We need economic activity to increase. Overall, manufacturing has been stagnant in North America for some time. We need better tax policies, less regulation, and a focus on innovation and reinvestment in our manufacturing sector. I’m actually pretty positive about the outlook this year.

CTE: How important is it for you to get feedback from the workforce and interact with them?

De Feo: Communication is fundamental to taking an organization through the change process, and the closer that I can be to understanding what’s on the minds of our team members, the more successful we will be. As a CEO, you have to use available technology, including video, the internet, email and the telephone, as well as town hall meetings and just plain walking around, shaking hands and sitting down and asking people how things are. All of those tactics have to be employed to really get a sense of what’s happening in the company.

CTE: What are the plans for your company’s production system?

De Feo: Kennametal has had a lean business system in place for many years. The bones of that remain in place. We’re looking to try and augment that with a push on simplification and automation. The simplification aspect of the change involves making fewer [new] things and more of our existing things. The automation means doing so with the latest technology. We expect to spend $200 million to $300 million in the next couple of years to automate more of our manufacturing processes. A year ago, 45 percent of our total cost was employment cost. When you’re a manufacturing company in the modern age, that’s too high. You can’t be competitive with companies selling into your markets from China and other low-cost countries if that remains your cost structure. In order to stay competitive, you have to use automation. We know for a fact that our biggest competitors are highly automated. We also know that our relative levels of profitability are significantly below that of our biggest competitors. That’s an opportunity for us, not a threat. Over time, that’ll mean that we will go through attrition, mostly here, improve our level of automation and reduce the number of people we have as the company moves to the next generation. The quality of that manufacturing individual is going to have to be highly skilled in both computer and modern manufacturing techniques. That really is a general comment for manufacturing in the developed world.