The vertical turret lathe is known for its ability to efficiently produce large, turned parts like mag wheels, bearing hubs and gear blanks. VTLs offer many advantages over their horizontal cousins: Part loading is easier, and even very large parts can be accommodated without increasing the machine footprint.

However, VTLs have a significant drawback, one familiar to anyone operating a vertical machining center—the chips fall onto the workpiece, where they are subject to recutting.

Several machine tool builders offer VTLs that avoid this problem. By inverting the spindle, chip problems are virtually eliminated. This approach also provides nearly free automation. By using the spindle as you would a robot—picking up parts from an onboard conveyor or carousel and unloading them—throughput is increased without the hassle of robot integration, programming and gripper management.

Jakob Petker, an applications engineer who handles technical sales at DMG Mori USA, Hoffman Estates, Ill., said the machine builder offers several models of VTLs, each with an inverted spindle and live tools. “We have three different sizes, ranging from our CTV 160 to our CTV 315. There’s also a ‘df’ version of our CTV 250—this stands for drehen fräsen, German for turn/mill. It is designed specifically for the homokinetic joints [CV joints] used in automobile drivetrains.” 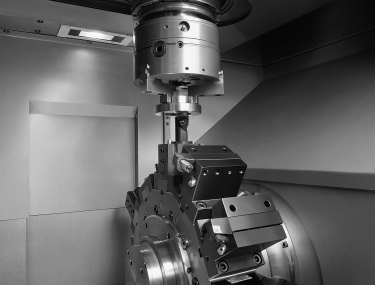 Petker said the need for efficient production of these and other automotive parts has been the primary driver behind machine development, adding that VTLs are also suitable for hydraulic components, chain wheels, bearing housings and other short, squat parts. Because of the nearly free automation that comes with an inverted spindle, these machines are typically used for automotive-level production volumes. By using flexible, quick-change workholding and clever job scheduling, even lower quantities—in the 100- to 1,000-piece range—can be cost-effectively machined.

“We also have a lot of customers that connect two machines together on the same conveyor,” Petker said. “This gives them the ability to perform Op. 10 on one spindle, flip the workpiece and then pass it to the second machine for finishing. Because milling functionality is also available, parts can often leave the cell complete.”

Kirk Stewart, director of sales for EMAG LLC, Farmington Hills, Mich., agreed. He said a traditional “right-side up” VTL is geared toward very large, heavy components that would be challenging to run on a horizontal spindle lathe. However, the sweet spot for inverted machines is from 3" (76.2mm) to about 14" (355.6mm) in diameter.

“Big parts are much easier to run on a VTL because you have gravity working in your favor,” he said. “You can just set the part down on the chuck and clamp it. But inverted machines compete nicely in the horizontal lathe market—especially at the higher volumes seen in the automotive market—on transmission parts, for example, or any round part that’s roughly as tall as it is wide.”

Stewart cited the various benefits of an inverted VTL machine structure: First, because chips don’t fall onto the workpiece, there’s no chip re-cutting as there is on a traditional VTL. In addition, the machine’s scales, motors and drive components are above the work zone. Therefore, coolant and its associated contaminants are not “going into the expensive part of the machine.” Also, the ability to automatically self-load and unload parts is a given on any inverted VTL. 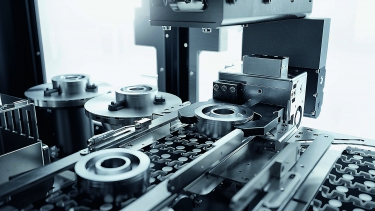 In EMAG’s case, this loading and unloading is done with a racetrack-style carousel equipped with V-shaped, self-centering workpiece-blank locators. “In the case of an inverted VTL, such as our VL2 and VL2 DUO,” Stewart said, “the cutting tool remains static on the indexing turret. Meanwhile, the spindle, together with the workpiece, is moving in the X and Z axes above it.” As a result, Stewart added, the user has the ability to take the workpiece to an unload location, index the carousel or shuttle to pick up a raw part and then take it back to the turret for machining. “It’s this difference in machine architecture that allows these machines to be self-loading.”

To pick up a part without mashing it into the spindle, a gimbal plate with four heavy-duty die springs is mounted in the loading position. When the spindle comes down to grab a new blank, the springs compress enough so any Z-axis deviation is absorbed, preventing damage to the spindle and chuck. The mechanism is also equipped with sensors to detect any misloading or misalignment issues and stop the machine in the event of a problem.

Why bother with this sort of merry-go-round approach when robotic part handling is both effective and readily available? Stewart said, in this instance, conventional robots have several strikes against them, including a larger footprint and the need for cages or light curtains to ensure operator safety. In addition, end users typically place a robot in front of the machine, making it more difficult for the operator to access the control and tend cutting tools.

However, with a carousel, an operator can easily manage the machine and load it with enough blanks to keep it busy for hours of unattended machining. If a shop does want to use a robot, it’s simple enough to mount one to the side of a VTL, where it is out of the way and can tend to the carousel.

Rob Nash, Charlotte, N.C.-based account manager for machine tool builder Scherer Feinbau GmbH, a German company that is part of the Chiron Group, pointed out several additional advantages of inverted-spindle machines: “Because the critical components are not exposed to heat, chips and cutting fluids, machine longevity is generally better. Maintenance is a matter of lifting a couple of covers.” He explained that the machine is inherently more accurate and, thanks to gravity, more stable, permitting heavier cuts and improved tool life. 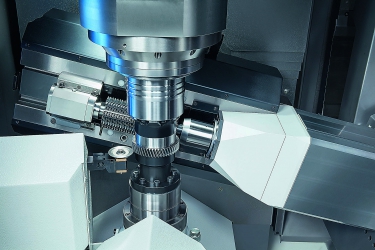 Gear hobbing is just one of the specialty operations possible on a properly equipped inverted-spindle VTL. Image courtesy of EMAG.

Despite these benefits, Nash warned that buying a system like this isn’t simply a matter of picking one off the showroom floor. Potential customers are interviewed as to their needs and applications before the right solutions can be determined.

“We are very flexible in terms of the types of automation that are available, the specific machine configuration and options,” he said. “For example, how much buffer time do you need? Will there be an operator present? Will other         machines be included in the automation? Most importantly, is this even the right solution? We don’t want to waste the customer’s time if there’s a better machine resource available.”

Of course, these are good questions to ask before making any machine purchase, but especially so when a fully automated turnkey system might run upward of $1 million. “It’s a different animal than what people are used to,” Nash said. “For us, it’s about how much value we can add to every square foot of floor space. But considering that our machines are not only very effective at turning but also drilling, milling and gear hobbing, the cost justification, in most cases, is very easy to demonstrate.”

Mazak Corp., Florence, Ky., is another machine tool builder that offers a full line of inverted-spindle lathes (labeled “IVS”), as well as various traditional VTL models. Product Manager Rick Bramstedt said most of the activity he sees comes from the automotive industry and its tier suppliers. For example, one company in the Eastern U.S. recently purchased 50 IVS machines, and another in a nearby state “just purchased a number of them.” 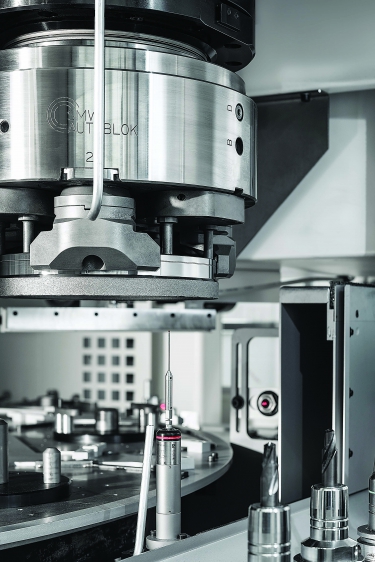 Despite the fact that the majority of inverted machines find homes in high-volume automotive shops, Bramstedt said there’s no reason one can’t be used in a job shop, provided the quantities justify it. “The machines are programmed the same way, the tooling is the same, and you have the built-in automation. If you have a family of parts with a few hundred parts to run, for example, it would do a fine job. But to be honest, most people in this situation go with a traditional VTL. That’s because, in most cases, an IVS installation is very application-specific, and by the time you’re done tooling one up with workpiece conveyors and gaging and special workholding, it can get pretty expensive.”

Whatever the price of the machine or whatever logo is on the sheet metal, inverted VTLs clearly have a place in manufacturing.

Said EMAG’s Stewart: “Manufacturers are lusting for better productivity. Success these days is a matter of maintaining a competitive advantage in the face of fewer skilled resources to run the machines. While this style of machine might not be for the run-of-the-mill job shop, I have customers that are running lot sizes in the low hundreds. There is definitely value in this solution.”