That’s the idea behind an effort led by the German Machine Tool Builders’ Association (VDW). With 17 partners, the association has developed umati, which is an acronym for universal machine tool interface. Based on OPC Unified Architecture—the common standard for industrial machine-to-machine communication—umati easily, securely and seamlessly integrates machine tools and related equipment into users’ information technology systems, according to the VDW’s Götz Görisch, project manager for umati. 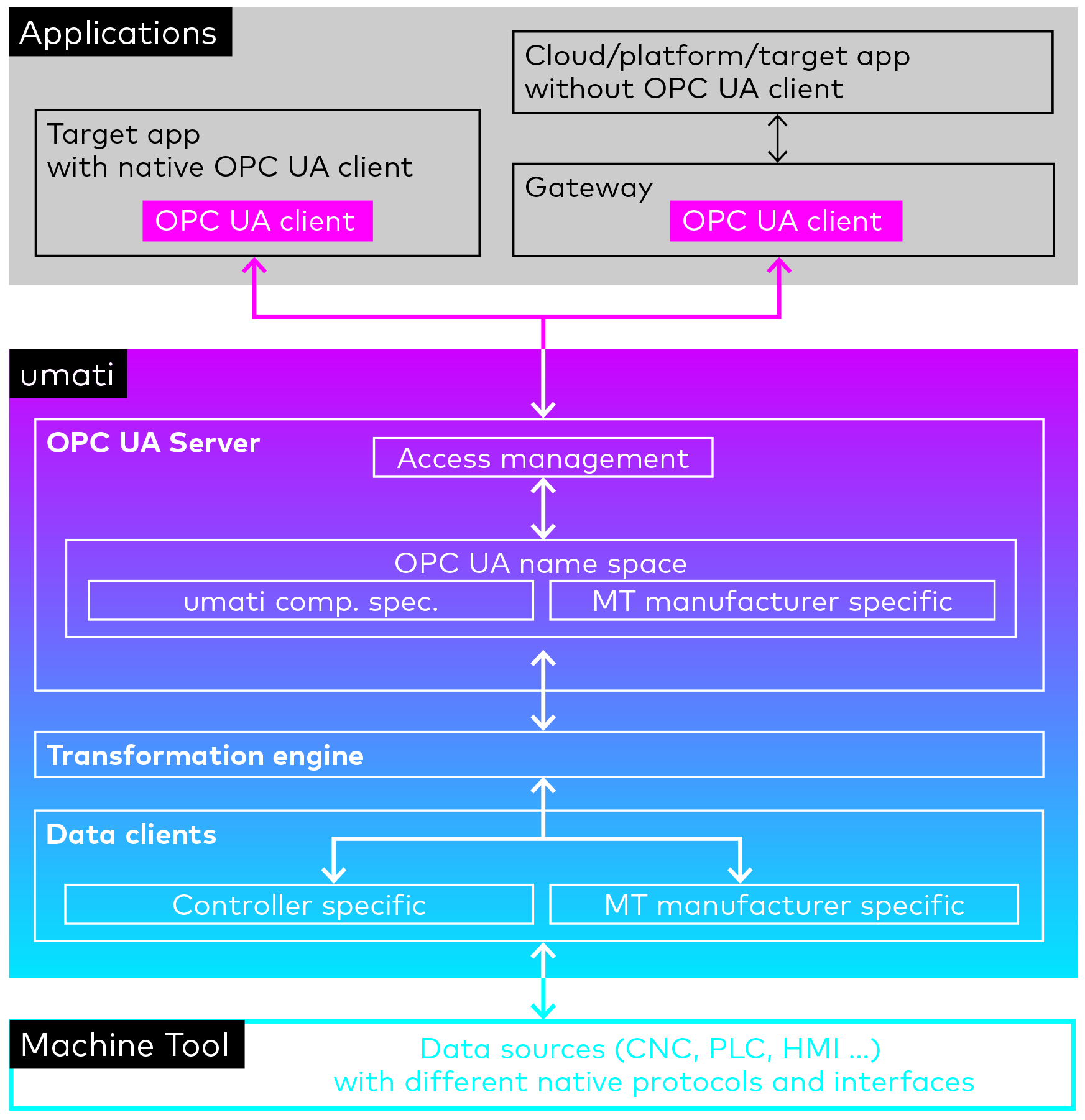 The architecture of umati is based on OPC Unified Architecture, the common standard for industrial machine-to-machine communication. Image courtesy of German Machine Tool Builders’ Association

The objective of the umati project is to facilitate the transmission of machine- and production-related data both within companies and to the cloud. Today, Görisch said, many shops can’t make the most effective use of this information because they are not connected to IT systems. At these shops, he noted, “the machine tool is a closed system, so this information is not available on the shop floor.”

On the other hand, “if a universal machine tool interface is broadly available, connecting machine tools to IT systems will be much easier,” Görisch said, adding that the average job shop may be able to complete the task in a matter of hours. As the word “universal” implies, the goal is to make umati a standard not just in Germany but for machine tool users all over the world.

Since the umati project launched in September 2017, a number of well-known machine tool builders and control manufacturers have signed on as partners, along with the University of Stuttgart. By simplifying the task of connecting machine tools to IT systems in the production environment, the partners hope umati will one day lead to more widespread transmission of various types of production data, including the operating condition of machines, the status of cutting tools and workpieces, and information about energy and material consumption during machining operations.

At the AMB trade show in Stuttgart, Germany, last year, umati passed its first major test, according to the VDW. For demonstration purposes, 18 machines from nine manufacturers with five control platforms were connected to create a umati-based communication network for data exchange. Participating companies reported that setting up the equipment for a demo manufacturing execution system took from eight to 16 hours. By contrast, setting up a similar network using current connectivity standards could require months of engineering time, according to Görisch.

The next big test for umati will be a more extensive demo at EMO Hannover 2019 in September. By that time, the VDW hopes to have a much larger number of international partners onboard for the project.

To make this happen, the VDW is engaged in what the organization describes as “intensive discussions” with both potential corporate partners and sister associations in Europe, the U.S., Japan, China, South Korea and elsewhere. The idea is to make umati a connectivity standard that meets the needs of machine tool builders and users all over the world.

To that end, the VDW has also announced plans to create a working group that will allow all interested international parties to participate in the standardization of the interface. “The main challenge is to finalize the draft specification together with a broad base of machine tool builders, users and control manufacturers,” Görisch said. Much has already been done in this regard, however, and he is confident that the umati standard will be finalized in time for EMO.

There has not been any real resistance from the international community to the idea of a universal machine tool connectivity standard. “Normally, when we explain why a universal connector is beneficial for everybody, we don’t see resistance,” Görisch said. “Instead, the reaction is, ‘How can we be a part of it?’”