Good parts cannot be machined without good cutting tools — that is, tools that are made accurately and in satisfactory condition. And neither makers nor users of tools can know whether they are what they should be without good inspection and measurement equipment.

In recent years, manufacturers of this equipment have been working hard to make hardware and software better and easier to use. As a result, tool inspection and measurement systems today have unprecedented capabilities that are accessible to shop floor personnel.

One such system is the »genius« universal measuring machine from Zoller Inc. in Ann Arbor, Michigan. For this month, the company has planned a virtual introduction of its new version of the »genius« in North America. The latest »genius« includes a five-megapixel camera for measuring microtools and revealing more details about tool surfaces. In addition, the new design removes heat-generating electronics from the main machine to guarantee the highest accuracy, said Dietmar Moll, director of business development.

The new »genius« also features the latest version of Zoller’s image processing software, »pilot 4.0«. Among other things, »pilot 4.0« offers an intuitive user interface that is completely customizable to make it easier for each user to run the »genius«. 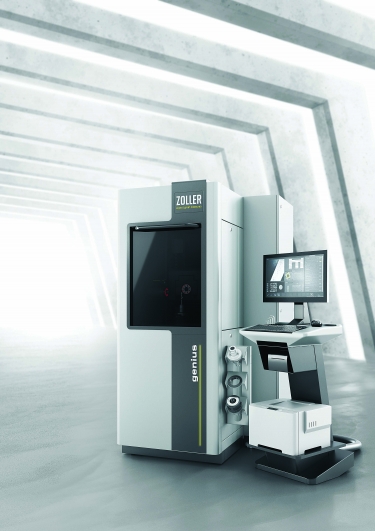 “In the past, it was basically the same user interface for different users,” Moll said. “Now the software can be customized by the user to make (the interface) even more friendly. So if John Smith was the last operator and now Mike Jones comes in, he finds a completely different user interface that he is used to.”

A customized interface can make things easier for an operator. He pointed out that »pilot« software has functions on up to four different levels. So if Jones normally measures batches of tools and produces batch reports, he can move the button for this function from a lower level in the software up to the top level, meaning he doesn’t need to make several clicks to find the button every time he needs that function.

The task of reaching the right screen or function in »pilot« software is made faster and easier by customizable shortcut icons called widgets. Although not a unique software feature, widgets are new to the inspection industry, Moll said.

Less expensive than the high-end »genius« are PG1000 cutting tool inspection systems from PG Inspection Technologies LLC in Waukesha, Wisconsin. One of the main selling points of the »genius« is that it’s an automated measuring system, said Max Mueller, president of PG Inspection Technologies. But he said an automated system must be programmed by a trained person to measure a tool. The PG1000, however, requires no programming.

“It was designed to be simple to use,” he said. “Most people can start using the functionality after playing around with it for a few minutes.”

Made for shop floor environments rather than quality labs or clean rooms, the PG1000 typically is located near one or more tool grinding machines. Mueller said the PG1000 quickly checks all tool dimensions of interest to manufacturers with accuracy down to the micron level.

“You grab a tool from the grinder, put it into a V-block, inspect it and then get back to work,” he said, adding that the company’s goal is to allow users to get the measurements they need in less than 30 seconds.

PG1000 machines come with PG Inspection Technologies’ Reaction software, which digitally analyzes 5 million pixels and sorts over 16 million colors at a rate of 15 times per second to find patterns and shapes. 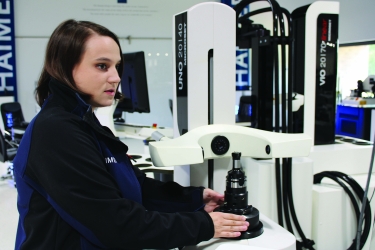 Users of the latest Microset tool presetters can take advantage of a number of new capabilities. Image courtesy of Haimer

“In CAD-based software, you might have 100 icons but primarily use only three of them,” Mueller said. “What makes ours easy to use is we have eliminated all the stuff you see in other software that is unnecessary for cutting tool inspections.”

With Reaction, users can take measurements using 1 µm (0.00004") linear scales and hand wheels or by using a mouse to click points on the screen. To take a screen measurement of an angle, he said a user might click three or four points on the picture of a tool shown on the screen, and the desired measurement will appear in a matter of seconds.

The latest Reaction software is version 9, which was released in January. For the new version, Mueller said the main focus was making the system easier to use so people would take advantage of all that it offers.

“When I first joined the company,” he said, “I learned that for 20 years we had been shipping these things out without a manual, and we found that our customers were only using about 10% to 20% of the machine’s capabilities.”

So PG Inspection Technologies produced a manual for version 9. In addition, the software includes both demonstration and training videos. The training videos also can be found on the company’s website.

“A lot of these videos are pretty straightforward,” Mueller said. “But we want to explain every feature of our program, and we found that it is more likely that people will watch a three-to-four-minute video than read a 100-page manual.”

Also new in version 9 is a feature to make it easy for users to create a PDF tool inspection report. The customizable report can contain as much or as little information as a user wishes to incorporate. Among other items, reports may include notes describing things the user saw during the inspection, an image and description of the tool, pass/fail tolerances, the name of the person who made the report and the name of the customer who will receive it.

Tool measurement technology also has moved forward at Haimer, maker of Microset tool presetters. (Haimer GmbH is headquartered in Igenhausen, Germany.) Microset’s image processing software now offers improved radius detection for both large- and small-radius tools. The new software allows users to measure radii down to 0.1 mm (0.004"), as well as large-radius tools that couldn’t be measured in the past because they didn’t fit into the tool presetter’s field of vision, said Brendt Holden, president of Villa Park, Illinois-based Haimer USA LLC.

Another new Microset feature is dynamic zoom, a hardware option that provides higher magnification of a cutting edge. Dynamic zoom is especially helpful when looking at transitions in dimensions or small corner radii, he said, adding that a new software function allows true three-stage zoom capability, not just digital zoom.

The latest Microset software also includes a “dirt filter” function. Holden said this helps prevent measurement errors by allowing the software to compensate automatically for any dirt on the edge of a cutting tool, eliminating the need to clean the cutting edge. 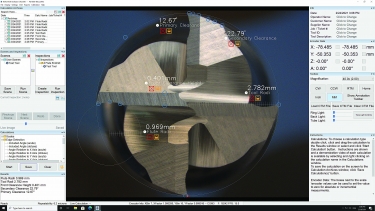 In addition, new Microset user management software can create three levels of user rights. One level is for people who are allowed only to measure tools. The next level up is for people who can measure and change data. And the highest level is for a system administrator “who can do anything,” he said, including change data, allow operators and create software settings.

Holden said the idea of limiting what most users can do is to prevent people from making programming mistakes that could lead to measurement inaccuracies.

Also new are a pair of related options called VIO Fit and VIO Scan, which are available for Microset VIO linear and VIO linear toolshrink machines. VIO Scan allows a scan of an entire tool between any two points that a user selects, using the data to create a complete measured image. VIO Fit is a software interface that lets users upload a dimensioned drawing of a tool, overlay it with a scanned image and then measure differences between the scan and drawing.

Haimer also has figured out how to measure gear skiving tools on a tool presetter, which Holden touts as a unique achievement. Today, gear skiving tools allow the creation of a gear in a part while it is still in a CNC machining center. He pointed out that in the past, such parts would have to be taken out of the machining center after milling and brought to a special gear cutting machine.

The challenge, however, was presetting these gear skiving tools, “which is very difficult,” he said. The company met the challenge, he explained, by equipping the Microset with a swivel head that lets the camera move in a way that allows it to accurately measure the dimensions of a gear skiving tool’s cutting edges.

“Companies that make gear skiving cutting tools should definitely have the $500,000 machine,” he said. “But does the end user of a cutting tool need to buy that? In our opinion, no. Instead, why not just buy a presetter that you can use throughout your shop and also for measuring the dimensions of gear skiving tools?” 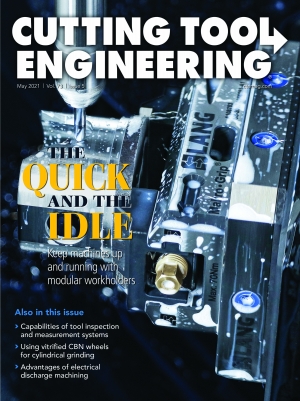