Experiencing the best of both worlds—centralized and decentralized—is the idea behind edge computing, which allows data processing at or near the source of data generation. Proponents say edge computing can make industrial data handling and analysis more efficient, secure and cost-effective than a completely centralized approach.

In conventional industrial internet of things systems, plant data is collected and sent for processing to the cloud, a data center containing a group of servers connected to the internet. This centralized data handling system gives users a global view of all connected equipment, which may be in a number of different locations. The system also allows users to quickly and easily update software in far-flung machines, said Michal Skubacz, head of industry software for machine tool systems at Munich-based Siemens AG, which develops technology for industrial edge computing.

However, “if you push everything to the cloud, you are dependent on network connectivity up to a cloud system,” Skubacz said. If the network breaks down, so do critical cloud-based production applications. 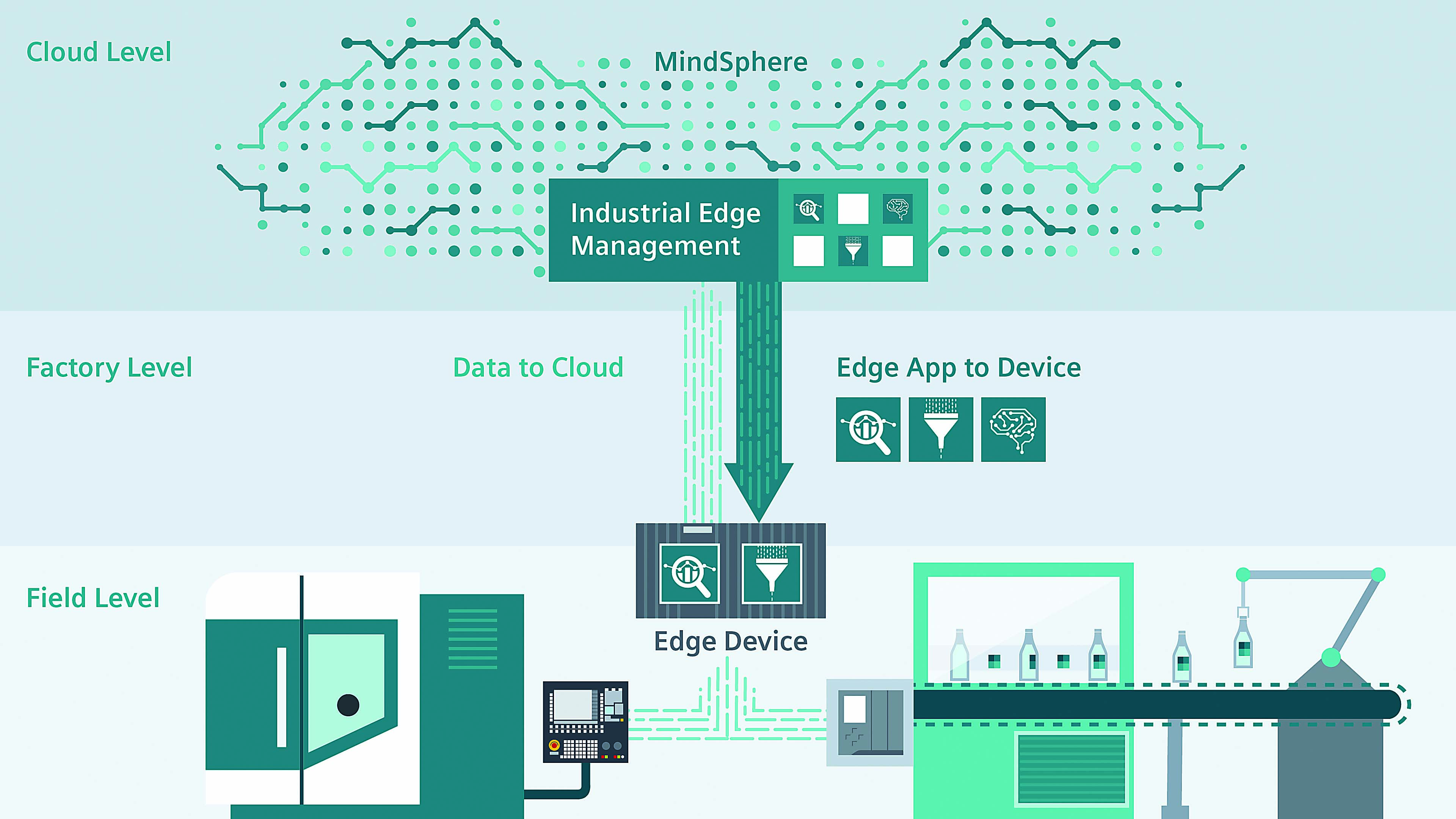 In edge computing systems, data processing is performed chiefly on the periphery rather than in the cloud, where Siemens’ MindSphere internet of things operating system functions. Image courtesy of Siemens

Cloud-based data management also introduces latency into industrial applications, he noted. Because it takes time for data to travel back and forth between the cloud and the plant floor, applications that require real-time responses cannot work properly.

Then there’s the issue of data load. Consider a shop floor with 50 CNC machines, each needing to be monitored during the entire production process. During production, information on machine movements could be collected hundreds of times per second by a large number of sensors. “The volume of data from those 50 machines that needs to be transferred would be enormous,” Skubacz said. “You would need networks with throughput that you probably don’t want to pay for.”

In addition, he said, privacy and security concerns may make firms reluctant to push secret and essential data out of their shops, where it could be more vulnerable to theft.

Moving to the Edge

These factors support the move toward edge computing, in which plant equipment analyzes most of its own data in real time. In many cases, “it makes a lot more sense to do the processing and analytics locally than sending it all up to the cloud,” said John Crupi, vice president of edge analytics at Greenwave Systems Inc., Irvine, California, a provider of edge analytics technology.

According to Skubacz, some companies think edge computing simply involves connecting an industry PC to a machine, but there’s more to it than that. “I understand edge computing to be an integrated system allowing us to run different applications very close to production. At the same time, it’s connected to some sort of system normally in the cloud that enables management of applications, remote updates” and other functions initiated away from the plant floor.

The edge does what Crupi describes as the first stage of processing. “Say you had a pattern detector that triggers an alert if there’s a rapid rise in (equipment) temperature,” he said. “You can handle that locally by going into the control and changing some parameters or notifying some other system on the plant floor.” 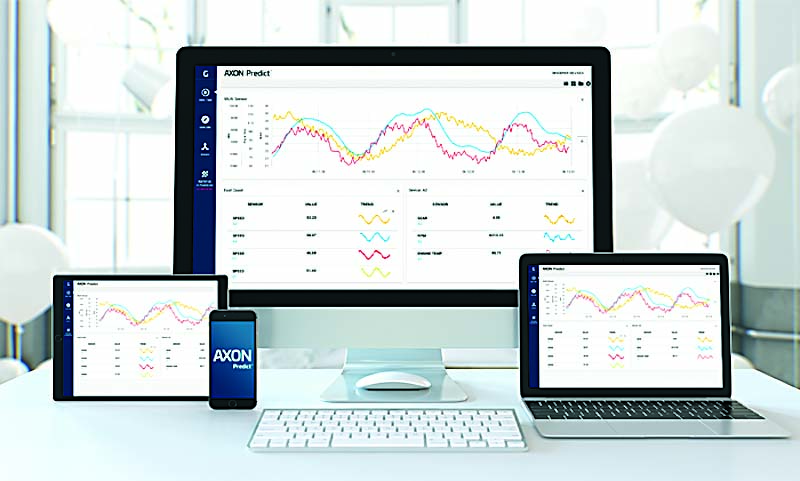 Axon Predict is an analytics platform that can be used in edge computing systems. Image courtesy of Greenwave Systems

The cloud, meanwhile, handles the second stage of processing, which Crupi calls aggregate analytics. For example, he said, “If you want to compare the average temperature of every red machine in a plant to red machines located everywhere in the world, each red machine at the edge computes its average temperature, sends that result to the cloud, and then the cloud sends down the average of all the machines to the edge” so the comparison can be made.

The cloud can also serve as a repository for historical data. For instance, Crupi said, the cloud can store several weeks of data that will allow calculations to determine whether machine speeds are within certain limits at a specified temperature.

While edge computing can be done at the machine, it may not be cost-effective to put that capability into a relatively simple machine, said John Fryer, senior director of industry solutions at Maynard, Massachusetts-based Stratus Technologies Inc., which sells an industrial edge computing platform. “But if you’ve got 10 of those machines on a production line, you can put in an edge computing system that collects all the information from the machines and runs in a centralized location.” That location could be on the plant floor or in a control room connected to the production line.

In today’s edge computing setups, data from machines is typically sent to a gateway for analysis, according to Crupi. A gateway is a small industrialized computer that is located in the plant and connects to the machines on the plant floor (either wirelessly or via plug-in connections) and the cloud.

Unlike many older gateways that were just “pass-throughs” to the cloud, the latest gateways “are pretty powerful and can run software,” Crupi said. “So industrial customers started to see that they could do processing. And these gateways are becoming so (inexpensive) that it makes a lot more sense to use them to accumulate and analyze the data than it would be to put analytics on the machines.”

Wherever it’s done, edge computing speeds up data processing so that plant-floor systems can react quickly to changing conditions. “Downtime is very expensive, so you’re trying to catch things as they are getting worse as opposed to when something actually fails,” Crupi said. “Edge computing gives you faster insight that allows you to take faster action when you start seeing (bad) things happen.” 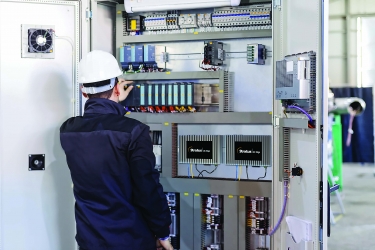 In addition, edge computing slashes the amount of production information being sent to the cloud, as well as the related network costs. By doing much of the necessary data processing locally, edge computing systems considerably slim down the data streams flowing to upper-level computing systems from the large number of connected industrial internet of things devices already deployed in manufacturing settings, Fryer noted.

Edge computing eliminates the need to send highly confidential data to the cloud and reduces the risk of machining operations being interrupted by network problems. While it offers the advantages of network connectivity, edge computing “is also about being independent of the network,” Skubacz said.

For machining firms interested in implementing an edge computing system, the first thing to consider is their connectivity strategy, according to Fryer. Simply put, he asked, “How are you going to get data from point A to point B?” The next thing to consider is what data needs to be kept close to the machine or the plant floor and what data should be sent to the cloud.

Even though Stratus and other suppliers of edge computing technology can provide equipment that is relatively easy to operate, “you need people at the plant level who have skills to deal with that equipment,” Fryer said. To minimize what is required of these people, he added, an edge computing strategy should be simple, able to protect itself from potential threats and run autonomously.

Still, some expertise is needed to run an edge computing system. That expertise is in short supply in the machining industry, according to Crupi, who describes edge computing as still in its infancy. He estimates that only 5 to 10 percent of industrial firms have the ability to do edge analytics.

Besides the widespread lack of expertise in edge computing, other factors hold back the technology. “There are multiple steps to get to the point of edge computing,” Crupi said. “Getting their machines connected to the cloud and able to communicate is a big issue for a lot of customers. And they often worry about security with cloud connectivity.”