Honing, grinding and lapping are the primary finishing processes used in most shops, and honing may be the most capable and underutilized of the three operations.

Honing removes material from the workpiece via abrasion. Like grinding, honing utilizes aluminum oxide, CBN, diamond and other abrasives to generate the cutting action. Abrasives for honing—again, like grinding—are typically formed into solid shapes generically referred to as “stones,” and honing generally involves multiple stones fully contacting the workpiece surface.

Unlike grinding, honing is done at relatively low cutting speeds. Cutting speeds for grinding start at about 5,000 sfm (1,524 m/min.) and go up. Honing, on the other hand, is performed at much lower cutting speeds, starting at around 65 sfm (19.8 m/min.). 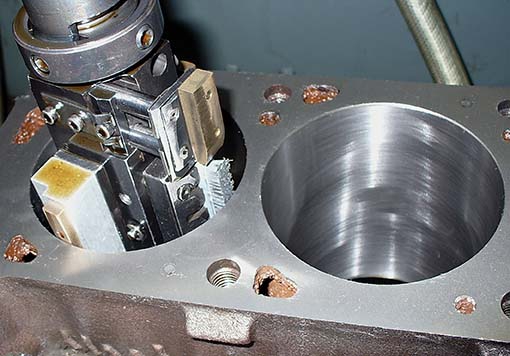 Honing material-removal rates are equivalent to or greater than grinding’s and, like most grinding operations, honing operations are best-suited for accurately removing small amounts of material.

Honing in industrial applications is almost always associated with cylindrical shapes, such as engine and hydraulic cylinders. Honing is a desired finishing process for these types of products for several reasons. First, honing imparts the very fine surface finishes that only abrasive processes can achieve. Honed surfaces also have a distinct crosshatched pattern, which effectively holds lubricant but does not provide a leak path for a fluid under pressure.

Hydraulic cylinders are an example of a common item that derives its functionality from honing. In a previous position, I worked for a manufacturer that built hydraulic pumps and motors for aircraft. These pumps operated at high pressures, some reaching 5,000 psi (345 bar) and incorporated variable-displacement, rotary pistons. Internally, rotary piston pumps resemble the cylinder on an old western pistol. There is a main cylinder with a series of holes spaced equally around the periphery. When the cylinder rotates, the pistons move in and out, generating the pumping action.

Honing was done by hand on small horizontal machines. Proper function of the pump required the pistons and cylinders to fit very closely so that oil could not leak between the piston and the bore, degrading performance. The craftsmen who performed the honing operation were capable of holding bore sizes inside a 0.0002" (0.051mm) tolerance band. Efficiently creating fits like these with any other means would have been impractical.

Honing can also help correct some geometry problems left from previous machining operations. Honing tools have multiple stones that are advanced outward by an expanding body. Honing stones are also long, relative to the bore diameter, giving them a significant amount of engagement in the bore.

The expanding construction and large tool engagement make honing tools self-centering even when the bore is not quite round. Therefore, honing can create very straight and round holes even when the part is extremely long or there is considerable tool overhang.

It can be difficult to accurately size hole diameters less than 1" (25.4mm) when the length-to-depth ratio is high. Boring is one option. Boring holes less than 1" requires a lot of patience and attention to detail. Small tools can easily be deflected, leading to out-of-spec diameters and hole geometries, and holding size when boring a deep hole in hardened material is exponentially more difficult. 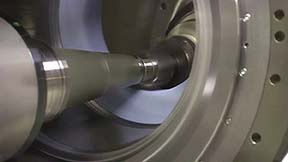 Honing, however, can quickly and accurately size small diameters while overcoming the difficulties associated with depth and hardness.

Honing is also easy to perform when making repairs outside of a machine shop. Honing tools can be driven by electric-drill motors, which are very common and relatively inexpensive. The portability of the tools makes honing a good solution for sizing bores in the field. Honing is so common in turbine repair that our company stocks numerous sizes of boring tools, along with the necessary stones, in workers’ portable toolkits.

Other honing applications exist besides finishing cylinders and bores. Gear teeth, for example, can also be honed. Honing is becoming more common in automotive gear manufacturing because it produces characteristics that promote quieter gear sets while improving gear life.

With gear honing, unlike cylindrical honing, a stone that resembles a standard grinding wheel with the gear tooth geometry is dressed, or formed, into the wheel face. Both the gear and the tool rotate, thereby simulating the relationship that will exist when the gear is in operation.

Because of this interaction, the abrasive cut is achieved on the flanks of the gear tooth with a cutting speed that is slow compared to grinding.

That is good, because grinding heat can damage gear teeth. Heat-affected zones that develop during grinding often appear as discolored areas around corners and edges where there is insufficient material to disperse the heat. These areas are more susceptible to failure and are, therefore, undesirable. Because honing is performed at a lower cutting speed, there is less heat generated. This eliminates the heat-related issues associated with grinding.

Costs associated with honing can be low, depending on the application. Second-hand machines like those used to manufacture the aerospace components produced by my former employee can be purchased for less than $2,500. Stones, mandrels and other tools are readily available from many sources, including online ones.

Like other machine tools, costs can grow quickly as machine size increases or automation is added. However, costs associated with honing will remain low when compared to similar machining processes.