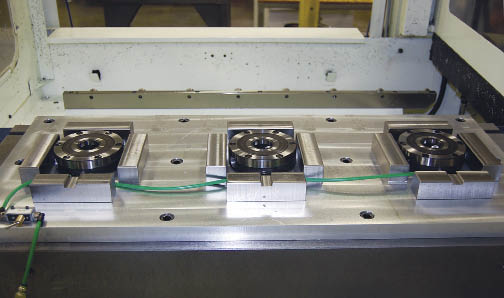 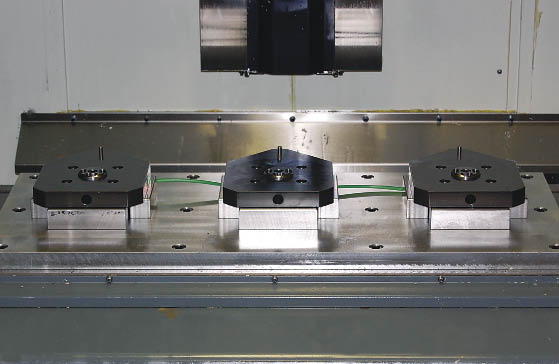 Minneapolis-area prototype and production shop Park Precision Machine fitted one pallet of its Kitamura VMC with chucks for the UNILOCK zero-point clamping system. The upper photo shows the chucks installed on a plate on the pallet, and the lower photo shows part fixtures with the zero-point system mounted on the chucks.

Setup and changeover costs can be reduced with zero-point workpiece clamping systems.

Part manufacturers are examining every aspect of the production process, from cutting tool parameters to workholding methods, to find ways to reduce costs and improve quality. Conversations with metalworking professionals have revealed a heightened awareness of the role that nonmachining changeover time plays in manufacturing costs. Shops know that speeding changeovers can save them money every time they switch a setup or move a part.

The benefits of a zero-point system are not limited to the setup of parts intended to be processed on a single machine. When a part moves from machine to machine for different operations, a zero-point system can accelerate the clamping and unclamping process and ensure accurate positioning in each new location. An example of a zero-point clamping system is the UNILOCK system from BIG Kaiser Precision Tooling (see sidebar on page 56).

A job at Park Precision Machine, Coon Rapids, Minn., illustrates the setup time savings afforded by zero-point clamping. Park Precision specializes in prototype and short- to medium-run production parts. The job was a housing for the gas transmission industry made of 356 aluminum alloy and weighing about 25 lbs. after machining. Production runs averaged about 300 pieces.

Park Precision’s customer had previously outsourced the work to Mexico, but inconsistent part quality, along with shipping cost considerations, had prompted the job’s return to the U.S., according to Robert Tummel, manufacturing engineer for Park. “Seeing work return to this country was a huge bonus for us,” Tummel said. He noted that the part required tight tolerances.

“We are holding ±0.002 " on quite a number of features, including some down in a deep cavity. There are some ±0.001 " widths and 0.0005 " true positions. To maintain that quality at a competitive price, we had to do a little head scratching to control costs, including reducing the costs associated with part changeover,” Tummel said.

Park Precision machined the housing on a Kitamura vertical machining center with a built-in two-pallet changer. The shop first clamped three blocks of stock in vises on one of the machine’s pallets for an initial group of operations, which consumed about 7 minutes. When those operations were completed, the parts were removed and bolted to fixtures that were clamped in vises on the second pallet for another group of operations. Those operations utilized about 20 tools for contour milling, deep-pocket milling, drilling, tapping, reaming and boring, and took about 35 minutes.

“The first operation required only about 7 minutes; that’s all the operator had for unloading and reloading the fixture on pallet two,” Tummel said. “He was very busy taking finished parts off and putting unfinished ones in.”

If Park Precision could find a way to reduce setup time for parts in the second operation, that would reduce the cutting cycle time by staying within the 7 minutes available while the first operation ran. “We had to make it fly,” Tummel said.

Considering the tight part tolerances, the shop also wanted to maximize machining accuracy. When the parts were loaded on fixtures and clamped in the mechanical vises, there was potential for part positioning error, and the part scrap rate was as high as 2 percent.

After seeing the UNILOCK zero-point system at the IMTS 2008 trade show and discussing the application with a BIG Kaiser representative, Park Precision placed an order with distributor Productivity Inc., Minneapolis, for a zero-point system to be fitted on one pallet of its VMC. “We saw zero-point as increasing our positioning accuracy, as far as our part loading and repositioning, and we saw it speeding up the process,” Tummel said.

Fixtures with mounting knobs for the zero-point system are mounted on the face of the parts after the first operation, locating off a bore in the center of the part and on drilled and tapped holes. Then the fixtures are locked into the chucks on pallet two.

The zero-point clamping system reduced loading times for the three parts on pallet two by about 2 minutes. “Two minutes for a cycle doesn’t sound like a lot, but it is 6 or 7 minutes per hour that is freed up to make more parts,” Tummel said. “Using the zero-point system, we now are able to finish 4.3 housings per hour, up from 3.7 per hour previously.” In addition, Tummel reported that eliminating the need to bolt on and align vises has reduced the time required to set up the operation by more than 35 percent, from 13 hours to 8 hours.

Part quality was more consistent as well. “With the prior setup, we didn’t have nearly the rigidity that we have now nor the positioning accuracy,” Tummel said. He estimated that the zero-point system improved accuracy by 30 to 40 percent. As a result, scrap rate fell to 0.1 percent with zero-point clamping.

The repeatable part positioning provided by the zero-point clamping system also enables Park Precision to adapt quickly to engineering changes. Data regarding part position is stored in the machine control. “We use the same offsets for height and location to set up the next part. Only program changes are needed,” Tummel said.

Because the system is modular, Park Precision intends to use it for other parts in the future. “The zero-point system is not going to leave pallet two,” Tummel said. “We have already adapted our holding devices for the zero-point system. We will have faster setup times for future jobs.”

Whenever parts moved between machines, setup might take 5 hours. The shop would have to align and redefine work coordinates for each operation.

In this case, the common locating point, which defines a zero-point system, was used to establish a part centerline, and that data was stored in each machine’s control. As a part moved from one machine to another, no realignment was required, whether the machine was a lathe, mill or coordinate measuring system.

A typical job at Competitive—involving two operations on lathes and one on a VMC—required a total of 35 hours of setup and production time. By adopting zero-point clamping, the shop reduced setup time from 10 to 3 hours and machining time from 25 to 15 hours. The time savings of 17 hours represented a nearly 50 percent reduction in overall manufacturing time for the batch. Competitive is expanding the system to include additional parts.

Of course, zero-point workholding is not the solution to every workholding challenge. For simple parts in low, non-time-critical volumes, even a vise may be the most cost-effective workholding method. On the other hand, custom quick-change fixturing could be the best alternative for holding a high-volume part. But for small part volumes, and for shops handling a variety of work, modular workholding like a zero-point system is often preferred because it can be adapted to other parts and reused repeatedly.

Many shops are aware that such workholding systems exist, but haven’t applied them either due to inertia or an “if-it’s-not-broke-don’t-fix-it” attitude. Whatever the excuse, there still are many good reasons to take a hard look at what can be an effective way to cut costs and increase competitiveness. CTE 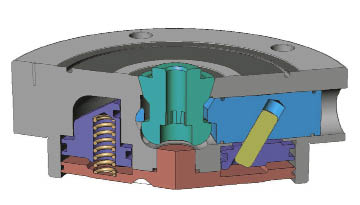 The UNILOCK zero-point clamping system from BIG Kaiser Precision Tooling features a precision-ground clamping wedge lock, or knob, (turquoise in this image) that is gripped in a chuck via a self-locking mechanical clamping system. Spring pressure drives wedges against the knob; air pressure is used to compress the springs and release the knob.

The UNILOCK zero-point clamping system from BIG Kaiser Precision Tooling features a precision-ground clamping wedge lock, or knob, that is gripped in a chuck via a self-locking mechanical clamping system. Spring pressure drives wedges against the knob; air pressure compresses the springs and releases the knob. The clamping knob is attached to a base plate, fixture or directly to a workpiece, and the chuck is mounted on the machine table or pallet.

The UNILOCK clamping knob mates with the center taper in the chuck to establish the X-Y centerline location, and a timing pin, or key, locates in a notch or bushing to restrict rotation. The Z reference is established by the bottom of the fixture or workpiece contacting the top ground surfaces of the chuck. These same mating surfaces (bottom of the fixture and top of the chuck) control axial alignment. The clamping knobs position to within 0.0001 " TIR.

The system can be adapted to existing pallets, fixtures and workpieces while achieving up to 11,240 lbs. of clamping force. The system’s modularity enables it to adapt to workpieces of virtually any shape or size. Zero-point clamping chucks are available in different configurations for integration onto all types of machine tools, such as mills, lathes, grinders and EDMs, as well as measuring equipment such as coordinate measuring machines. BIG Kaiser says the UNILOCK zero-point clamping chuck system can reduce setup time by up to 90 percent.