The right workholder is critical for success when 5-axis machining.

Your shop just bought its first 5-axis machining center. Now what? Not only are there new and more complex programming techniques to learn—never mind the mind-boggling variety of part processing options to contend with—there’s also the pesky problem of how to grip workpieces. With the ability to tilt, rotate and position parts in ways never before possible, machining five sides of a workpiece in a single setup is a challenging but straightforward exercise—provided clearance between the workpiece, machine table and spindle head is maintained.

Workholding on a 5-axis machine requires positioning a part high enough off the table that all sides can be reached with the cutting tool, while still maintaining sufficient rigidity for machining. You can forget about that old standby, the 6" machinist’s vise. Using one on a 5-axis machine is like trying to rebuild an engine while it’s still bolted to the car. Nor will many fixtures built for 3-axis machining centers be usable, not when the machine tool can twist and turn like a ballerina in “The Nutcracker.” It’s time to upgrade those legacy workholding strategies for ones designed specifically for simultaneous 5-axis or 3+2 machining.

The RZM vise from Röhm grips the bottom 0.098" of an aluminum workpiece. Image courtesy Röhm Products of America.

Röhm Products of America Inc., Suwanee, Ga., offers one solution with its type 725-00 RZM centric clamping vise. Goran Handac, product manager for manual clamping technology, said the screw-type vise incorporates self-centering claw jaws that grip the bottom 2.5mm (0.098") of a workpiece, raising it more than 7" (177.8mm) off the surface of the machine table. According to Handac, some manufacturers achieve similar heights by adding riser blocks or additional metal to the bottom of a standard vise, but this can create problems.

“Because standard vises have a shallow profile, chips and dirt can accumulate within the vise. Manual cleaning is necessary, which takes away valuable machine time,” he said. “Our vise has a simple screw design and utilizes a pair of U-channels that slide on a set of integral box ways. Coolant can easily flow through the vise, carrying away debris, while the telescoping halves support one another, providing a rigid and precise setup that promotes heavy machining.”

Röhm achieves this by using a hardened and ground steel body and a clamping mechanism positioned directly beneath the gripping area. This provides 25 kN (5,620 lbs./sq. ft.) of clamping force at a tightening torque of 150 Nm (110.6 ft.-lbs.) in a vise measuring 180mm (7.09") wide. “Most of the tables on these machines are fairly small, so they’ll need a compact vise,” Handac said. “And since the parts are positioned very high in the workspace and often gripped by only a small section of the material, it’s very important to have a strong, vibration-free workholding device.”

“One of the cool things about the SCMX-style vise is that by gripping the inside of the part, you can machine the entire periphery without worrying about tool clearance or hitting the jaws,” said Steve Kane, global sales and marketing manager for the Minneapolis-based company. “And because the vise pulls the part down, deflection is minimal.” 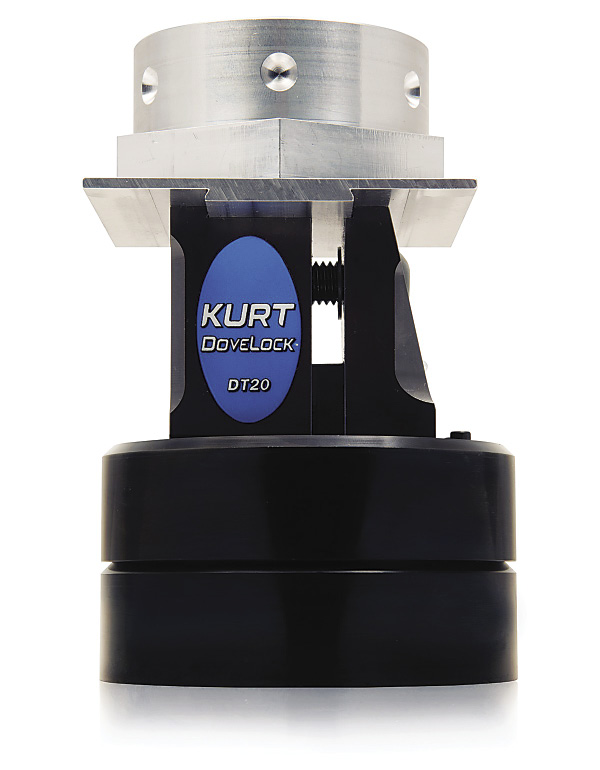 Kurt’s DT20 single-acting vise grips the bottom of an aluminum workpiece.
A secondary operation is needed to remove the sacrificial material and
machine the backside of the part. Image courtesy Kurt Industrial Products.

The SCMX is also self-centering. All nonhydraulic vises, 5-axis or otherwise, are either push-type or pull-type—meaning they push or pull the movable jaw in one direction—or self-centering, where both jaws move simultaneously, consistently centering the workpiece in the vise. On first operations, when stock is removed from all five sides of the workpiece, the choice is often irrelevant. But on secondary operations, when variations in part size can negatively impact feature positions, self-centering vises are crucial to geometric accuracy. As an added bonus, programming is somewhat simpler on self-centering vises, because the center of the workpiece is a known datum.

Kurt also offers the DT20, a push-type, 5-axis vise constructed of hardened 4140 steel, with a dovetail clamping surface and fixed positioning pin. (See photo above.) Dovetail vises require the workpiece to be prepped in advance by cutting a pair of opposing dovetail grooves on either side of the workpiece. (See sidebar at the end of this article.) This gripping area must then be machined away during a subsequent operation, or the workpiece is sliced away from the sacrificial material after completion. Despite the need for premachining, Kane noted many of his customers prefer a dovetail design. “For those shops taking heavy cuts, dovetails are the clear choice,” he said. “The part absolutely cannot lift up.”

Another proponent of dovetail-style vises is Raptor Workholding Products Inc., Burbank, Calif. The company introduced its single-acting modular vises in 2008, when David Fisher, president of parent company S&H Machine Inc., started using Raptor in his Burbank aerospace machine shop. Fisher and his team recently expanded the Raptor line with a self-centering model. “We found there’s definitely a need for this type of vise,” he said. “The MSV1000 can be used with traditional dovetail jaws or machined to grip directly on the finished workpiece for secondary operations.”

Fisher said one shortcoming of many 5-axis workholding systems is the inability to load more than one part at a time into the machine. This limits a shop’s ability to run unattended, as an operator must be available—or a robot if the shop is so equipped—to load a fresh blank into the vise more frequently than with horizontal or 3-axis vertical machining centers, where multiple part fixturing is the norm. Raptor avoids this limitation with its multiple-fixture systems, which can hold two, four or six parts at once, but still provide adequate clearance for tools to reach the sides of each workpiece. 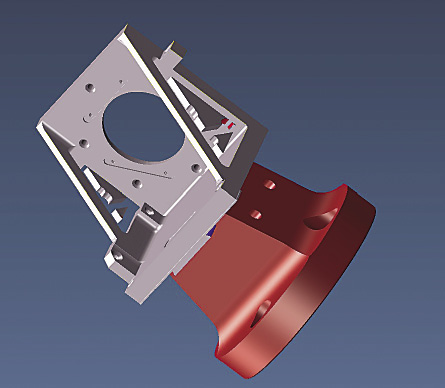 A 3D model of a titanium bracket bolted to a Raptor RWP-026 aluminum vise. Image courtesy Next Intent.

“Success with clamping multiple parts in a 5-axis machine depends on the workpiece geometry,” Fisher said. “With larger parts or where small features require the spindle to approach close to the workpiece, interference can be a problem. We have one job where we had to limit the setup to three parts per cycle, but this still gives us nearly 6 hours of unattended machining.”

Darin Wion, vice president of sales and marketing for Raptor, said workholding is often overlooked when a shop purchases its first 5-axis machining center. “Quite often the workholding comes last in the pecking order,” he said. “They’ve thought through the toolholders, the cutting tools, but then once the machine is sitting on the floor, they are left scratching their heads over how to hold the parts. A lot of times they end up throwing a single-station vise on a machine that’s capable of running multiple parts at one time. It undermines the entire capacity of a very expensive machine tool.” 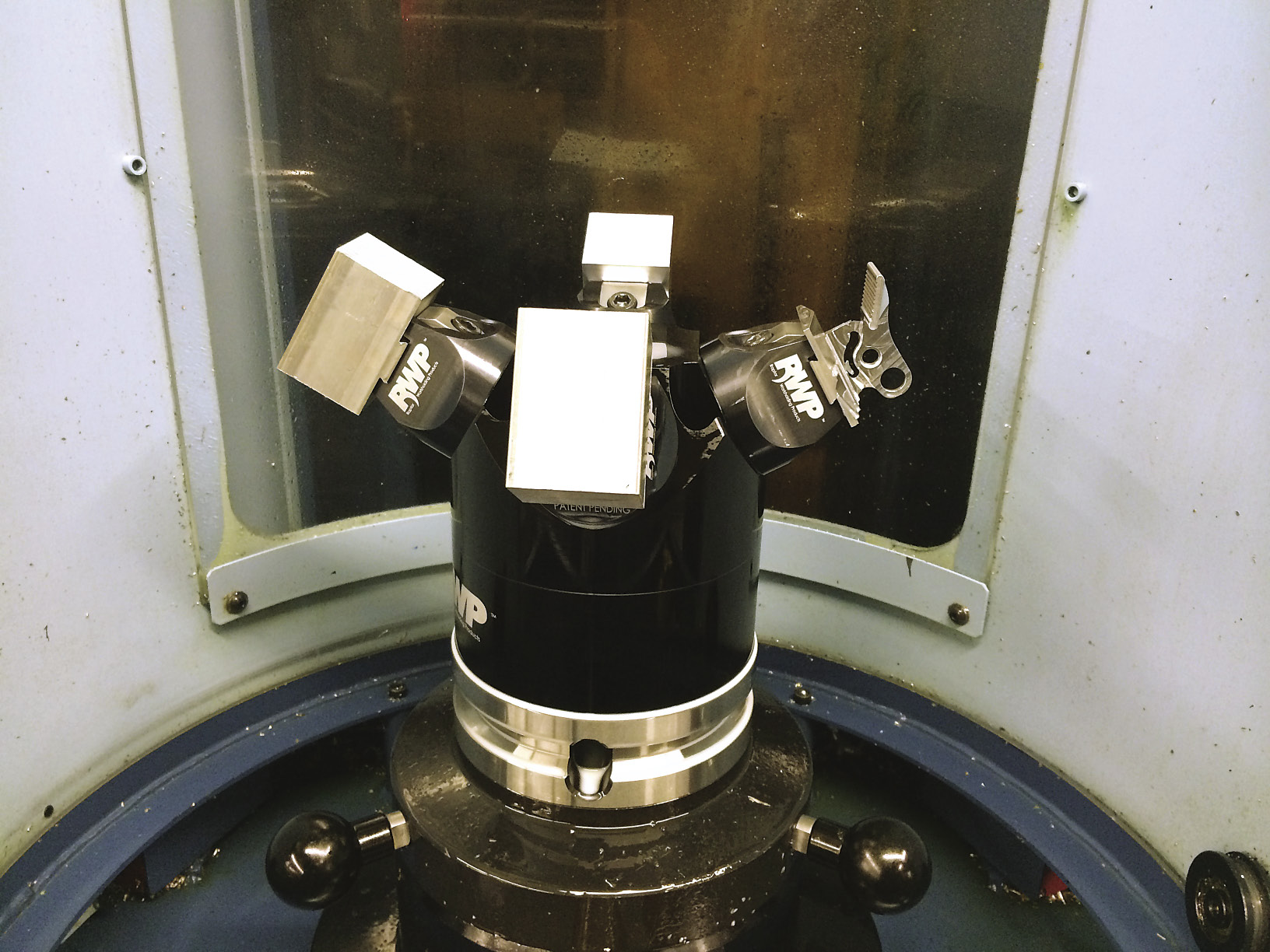 Someone who knows all about this is Chris Baker, manufacturing manager at Next Intent, an aerospace job shop in San Luis Obispo, Calif., that “builds really cool stuff.” When the company first started 5-axis machining, Baker opted to design and build his own fixtures, which were admittedly similar to the vises Raptor was selling at the time. He soon decided it made more sense to focus the shop’s energies on part making and leave fixture building to the specialists.

“We had good results with our homemade fixtures, but got so busy that it came down to making parts or making fixtures,” he said. “So we decided to give the Raptor a try and were happy with the results. Being able to remove the part from the vise, check it and then put it back within 0.0005" or better was a real plus.”

Matt Redman, EDM supervisor at Next Intent, agreed. “The option of a stainless steel dovetail vise is a nice extension to our EDM tooling. The main benefit is that we can take a part from our 5-axis machining center and accurately locate it in our wire EDM, ensuring accuracy between the different operations.”

Next Intent Senior Manufacturing Supervisor Dale Bruce said he was initially skeptical about dovetail workholding. “You look at the amount of surface area that’s used to hold the part and wonder if it’s going to come loose during heavy cuts. I can tell you, though, even when we’re cutting titanium or stainless, dovetails are amazingly rigid. The only time we’ve lost a part was when I crashed a tool into it and tore the dovetail off the bottom. It went ‘clunk’ and fell into the chip pan. The good news was, the Raptor was intact—we’re still using it today.”

Because 5-axis machining centers provide access to multiple sides of the workpiece, gripping a small amount of material along the bottom of the workpiece blank maximizes the surface area available for machining. This ultimately reduces cycle time and improves part quality. To avoid the rocking and tipping that comes with saw-cut blanks, however, premachined blanks are generally a must with 5-axis work, and, in the case of dovetail vises, blanks require a V-shaped slots on each side of the blank, as well as a small positioning hole on the locating surface. 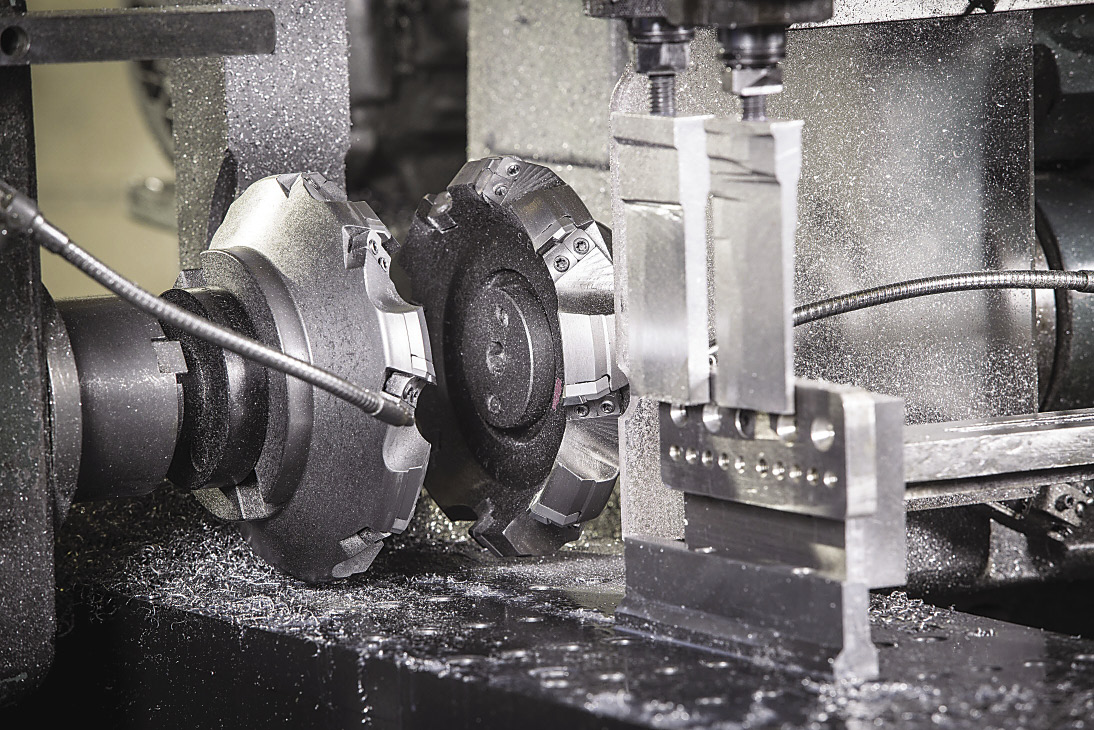 “Oh great,” you’re thinking, “there goes the profit margin.” Don’t despair—premachining blanks is no big deal. Vise manufacturers supply special milling cutters designed for use with their vises, and directions on where to place locating features and how deep to cut them. All that’s needed is a basic milling machine—even an old manual mill will do—and an operator to load it. You’ll be cranking out machine ready blanks in no time.

Don’t have the time? Give John Belzer a call. He’s CEO of wholesale value-added metals provider TCI Precision Metals Co., Gardena, Calif. Belzer’s been selling machine-ready blanks in steel, stainless, aluminum, and superalloys for the past 57 years—“anything but magnesium.” The majority of these are duplex-milled to a ±0.002" (0.0508mm) tolerance, often accurate enough to avoid further machining.

Seeing an opportunity in the growing 5-axis market, TCI collaborated with Raptor to supply machine-ready dovetailed blanks. “Blank preparation isn’t difficult, but many shops consider it nuisance work,” Belzer said. “In fact, I was at a trade show recently and was approached by one shop owner who said he’d invested in dovetail tooling, but hated prepping the blanks so much he stopped using it. We were able to help him with machine-ready blanks, ready to go directly into the shop’s 5-axis machining center. Change is hard, but it’s a real shame to avoid investment in good 5-axis workholding just because you have to adjust your machining processes. Considering the cycle time savings shops can gain with rigid, precise fixturing, doing so is a no-brainer.”