Cross-country and downhill cyclists appreciate having durable, lightweight parts while manufacturers of those parts, such as Straitline Components, like to reduce waste and boost productivity. To reduce manufacturing costs, the Sidney, British Columbia, company tries to minimize the amount of material required for effective workholding, but found throughput suffered because of its previous workholding method.

In addition to producing its own brand of bike parts, Straitline is a job shop that serves an array of industries, from aerospace to oceanographic instrumentation. The company began producing its own bike parts to help ride out the business cycles of its customers. “We needed something to fill in the gaps without finding new machining customers, and we figured we could just create our own products,” Paulson said, noting that its bike part business represents 60 percent of Straitline’s work.

When previously making aluminum bike parts, the shop was holding workpieces in double-lock vises mounted on tombstones, but found it couldn’t hold them tightly enough to optimize roughing parameters without causing workpiece slippage and out-of-tolerance parts. “We could hold onto more material, but that just meant manufacturing costs went up,” Paulson said.

Figuring there must be a better way, the company sought alternatives and found Pitbull fixture clamps from Mitee-Bite Products LLC, Center Ossipee, N.H. The clamps provide a low gripping profile and high vertical and horizontal clamping forces, according to Mitee-Bite. For its aggressive stock-removal requirements, Straitline selected 0.750 "-wide clamps with a tool steel knife edge and maximum holding force of 3,600 lbs. It built a test fixture for the clamps and compared the clamp setup against the vise setup.

“The clamps can apply a tremendous amount of down force because of the way they cam down onto the part,” Paulson said, noting that the clamps only hold 0.090 " of stock using a standard ¼-20 cap screw. “We found we could push the Mitee-Bite setup as hard as we wanted without the parts shifting in the fixture.”

For production applications using the clamps, Straitline made workholding fixture plates the same size as the tombstone faces. Dowel pins are used to locate the plates, which bolt onto the palletized tombstones, Paulson explained. The company uses an air tool to quickly tighten and loosen the clamp cap screws when placing parts on fixture plates and removing them. 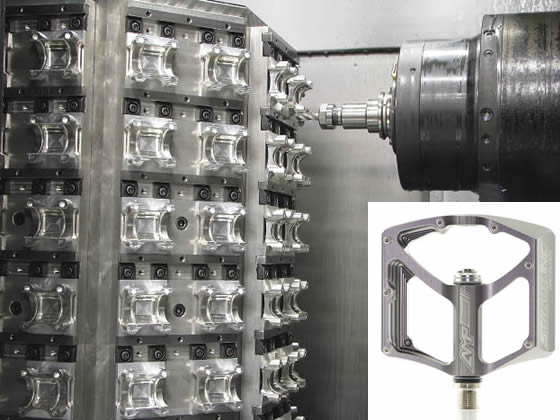 When roughing bicycle components, such as an aluminum pedal (inset), on a tombstone, Straitline Components uses Pitbull fixture clamps from Mitee-Bite to hold as little as 0.090 " of stock without the parts shifting in the fixture.

Although the part loading/unloading process takes place while another tombstone’s worth of parts is being machined—and a different job can be on each face—quickly performing the process allows an operator to perform other tasks, such as packaging parts. “The pallet-change time is only 6 seconds, so there’s always something running in a machine,” Paulson said.

In addition to being able to reduce cycle times by aggressively roughing the workpieces, the Pitbull arrangement enables Straitline to cut cycle times by fixturing more workpieces to a tombstone face, increasing from two parts per face to eight per face, for example, in one application on an eight-sided tombstone. That, in turn, means fewer tool changes because a tool runs through all parts on a tombstone before the next tool is applied. In addition, the machine experiences less wear and tear from the reduction in rapid movements.

Paulson estimated that the decrease in noncut time from using high-density fixturing reduced cycle time by 25 percent—even with a machine that provides a 0.9-sec. tool change and 2,000-ipm rapids. “We wouldn’t be able to produce the number of parts per day without very dense fixturing unless we had more machines,” he said. Straitline employs the clamps on three milling machines.

The shop performs some lights-out machining. When using vises, operators had to run machines on evenings and weekends to keep up with demand, whereas operators are now only needed to work 8-hour shifts Monday through Friday, according to Paulson. The unattended time at night and partly over the weekend makes up for the difference in part quantity, he noted. Sometimes a worker loads the tombstones, leaves at 5 o’clock at night, and the job runs until noon the next day, Paulson added.

An exception might be when a tool breaks. Using an automatic probe, the company checks tools that are susceptible to breakage, such as those under 3⁄8 " in diameter, after machining a face of parts. When a tool breaks, Paulson prefers stopping the machine to avoid the possibility of applying a new, redundant cutter to a part containing the broken tool and damaging another tool. But, using tool life history data and the correct parameters, stopping a machine during unattended operation is infrequent. “Usually, we go weeks or months without having anything break,” he said.