Gripping a small amount of workpiece material in a workholder is a well-established practice. However, it requires special tooling, such as a hydraulic fixture, to first create indentations in the material before holding the workpiece for machining in a separate workholding device, or it requires adding a gripping feature, such as a dovetail, into the workpiece that has to be removed later, according to Steve Breslin, national sales manager for Lexair Inc.

As an alternative, the company distributes SinterGrip vise jaws from OML, an Italian workholder manufacturer. According to Lexair, the jaws grip 2mm to 3.5mm of material to enable aggressive 5-axis machining with minimal material waste and without the need for a special vise, special tools or premachining a workpiece to add a dovetail or other gripping feature. 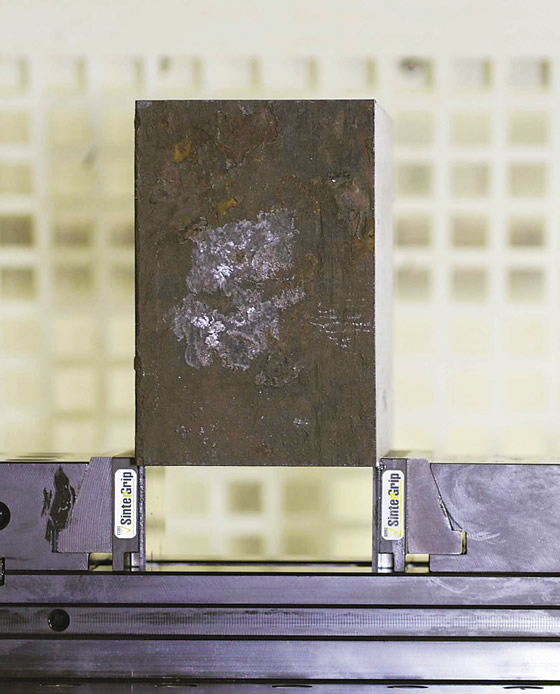 The SinterGrip vise jaws can hold as little as 2mm of workpiece material. Inset: Coated carbide inserts for the jaws grip a workpiece with two rows of pyramidal teeth, which are angled differently. 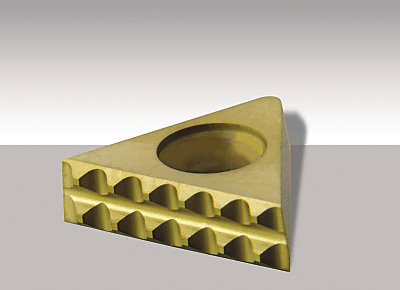 “When you add a dovetail, once you’ve machined the part, you have to machine it off,” Breslin said. “If you’re working with an expensive material like titanium, you’re throwing away money. We’re eliminating all that. All you have to do is sit the workpiece in the vise on the ledge or a parallel, depending on the jaw/vise application, pierce the material with the teeth in the inserts and wail away at it.”

Each jaw, which is available in widths up to 8 " (200mm), has triangular, dovetailed pockets across the top edge into which serrated carbide inserts are placed and secured with screws. The two vertical insert edges that mate with walls on the pocket have a 5° negative angle that corresponds with an angle on the pocket walls. Therefore, the clamping force on the jaws translates into a downward force on the inserts and workpiece, the company stated.

The inserts penetrate the workpiece edge and exert a force that pushes the part down because the inserts’ pyramidal teeth have a sharper angle on the lower edge than on the upper edge. The clamping force on the inserts spreads diagonally into the jaw, not straight into it, Breslin explained, so the jaw takes the load of holding the inserts instead of the screws, which could break under the heavy load.

A user can place several inserts in a jaw, with dummy inserts available to fill unused pockets. “You could put an insert in every other pocket and use dummies to keep chips out of the holes,” Breslin said.

Although developed primarily for use with OML’s MC and Genius vises, Breslin noted the SinterGrip jaws can be adapted for use with any vise.