The Flexibility of Modular Fixturing

Modular fixturing makes economic sense when runs are short. In some situations, it may make sense for longer runs, too.

Modular fixturing is a smart investment. With the purchase of standard, reusable, modular elements, a user no longer has to spend money to design and build a dedicated fixture for each and every application. Instead, he can strip down a modular workholder built for a previous job; reconfigure the setup, adding or removing components as needed; and build an entirely new fixture.

This flexibility also allows the user to assemble a new fixture quickly. A dedicated fixture can take days to design, machine, and assemble. Depending on the complexity of the application, a modular system can be assembled in as little as 30 minutes.

A shop that can quickly adapt its fixturing to the job at hand has a distinct advantage over its competitors. In one case, a shop won an important job from a Big Three automaker because of the flexibility of its modular fixturing. The automaker was looking for a shop that could quickly modify 600 parts. The job could not be accomplished with a simple tabletop setup. All the other shops the automaker had approached said it would take anywhere from three to eight weeks to deliver the modified parts, but the customer needed them much sooner than that. The shop that got the job was able to meet the automaker’s deadline, because its modular fixturing system could be adapted so quickly. The shop designed and built a fixture for the 600 parts in the morning and was machining parts by the afternoon. The completed job was delivered the next day.

The foundation of any modular system consists of the base plates, columns, and angles, with their grids of slots or holes in their faces. This grid determines the location of the system’s components, which attach to the base. The grid pattern is machined to close tolerances to ensure the repeatability of the setups. This base plate attaches to the machine table, pallet, column, or angle.

Modular fixturing systems also include precision and nonprecision positioners, locators, and manual and hydraulic clamps (Figure 1). System manufacturers try to provide a wide array of components so that users can fixture nearly all workpieces with off-the-shelf parts. On occasion, it may be necessary to modify a modular system component or create a custom component to fit a workpiece. But users will receive a much faster payback on their modular-system investment if they can fixture all their workpieces with standard reusable components.

Although components within a system are standardized, there is no industry-wide standardization of modular-fixturing elements. With few exceptions, parts manufactured for one system cannot be used with another system. Despite these differences, the basic concept behind these systems is the same. System components are attached to the base plate with connectors designed to fit into the base plate’s T-slots or dowel-pin holes. The base plates of a T-slot system are crisscrossed with a series of evenly spaced slots. Components have T-nuts and studs that fit into these slots. Once a component has been slid into the correct position, the user tightens the nut to hold it in place.

With a T-slot system, the user enjoys a great degree of flexibility and adjustability, because components can be located anywhere along any of the slots in the grid. However, a T-slot system may not be the best choice for users whose part-run schedule requires them to rebuild fixtures that have been dismantled. Because the slots do not provide repeatable locations for system components or offer easily identified reference points, the original positions of the components must be precisely measured and extensively documented through prints, diagrams, photographs, and bills of materials. To accurately recreate the fixture as it was documented, the user must gage the position of each component once again as he installs it. 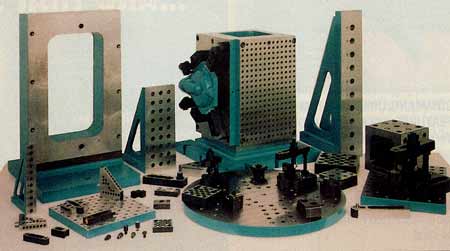 Figure 1:A typical modular fixturing system includes a wide array of components to meet the fixturing requirements of nearly any application.

The dowel-pin system is nearly as flexible as the T-slot system. And for users who must rebuild dismantled fixtures, the system offers a more accurate and easily repeatable way to locate components. The regularly spaced grid of holes provides the user with fixed reference points. A component installed in the same hole it was in before will always be in the same location. To document the position of a component, the user simply identifies the hole or holes into which it was installed. An alphanumeric labeling system engraved on the base plates makes this documentation even simpler. Each hole is identified with a letter/number combination that designates which horizontal row and vertical column it is in. The documentation typically includes the part number or a description of each component used and the alphanumeric location of any dowel pins or fasteners used to install it. This information might be supplemented with photographs or videos to show how components fit together or how the workpiece fits into the fixture. 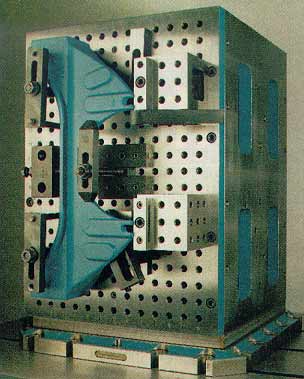 Figure 2: A grid of precisely spaced holes is used to locate and attach the components of a dowel-pin modular fixturing system. The alphanumeric labels for the holes can be seen etched into the left edge and bottom of the column’s face.

Because fast turnarounds and short part runs are common in prototype work, modular fixturing is considered the ideal workholding choice for this area of manufacturing. Engineers can quickly build fixtures with modular components and machine a single part. This allows them to see and test part designs within a matter of days. Where dedicated fixtures are used for prototype work, it can take weeks before the engineers will have a part in hand to examine.

Manufacturers of modular fixturing also suggest using their systems for short-run jobs. Short runs allow the user to enjoy the full economic benefits of his modular system, because the cost of fixturing per application is reduced every time the same components can be reused for a new application. The only new fixturing costs incurred for each new application are setup costs.

To determine if the use of a modular system would lower fixturing costs, a shop must calculate how many jobs it would have to perform before its dedicated-fixturing costs would equal its costs using a modular system. To figure this, the shop must add the cost of setting up a modular fixture to the initial cost of the total system and divide this amount by the cost of a single dedicated fixture. For instance, let’s say a shop would have to pay $8300 for a modular system with a plate and enough positioners, locators, clamps, and accessories to meet its needs. It takes an average of four hours for the machinists to set up a modular fixture for the type of work the shop does. At $30 per hour, setup costs would be $120. The shop is currently paying an average of $3000 for each of its dedicated fixtures. In this scenario, a modular fixturing system would start saving the shop money after 2.8 jobs. Future fixtures for other parts will be essentially free.

Even if a shop machines parts primarily in long runs, it may be able to benefit from modular fixturing. Machinists can be in production almost immediately by building interim fixtures from modular parts while they wait for the dedicated fixture to be built. Once the dedicated fixture arrives, the machinist can swap out the temporary fixture and use the components for the next job.

Prototyping, short runs, and interim work are the traditional uses for modular fixturing. But these aren’t the only tasks that can benefit from modular fixturing’s flexibility. For instance, users sometimes build dedicated fixtures out of standard modular components, plates, and columns for production runs that take several months to complete. Users prefer these hybrid fixtures to dedicated fixtures for two reasons:

It takes no more effort or skill to design and operate a fixture that can be dismantled and reused than it takes to design and operate dedicated fixturing. Often a user can build a fixture on-the-spot by installing components around the part. This flexibility eliminates the planning and machining steps that can add days or weeks to the creation of a dedicated fixture. It also allows the user to experiment with different configurations until he finds the best possible setup. To modify or adjust a dedicated fixture, a user must remachine it. If a modular fixture is built without plans, it can be documented with photographs, videos, or sketches. This will give the user who must recreate the fixture a visual guide to accompany the bill of materials. In the case of a dowel-pin modular system, all that is needed is a record of the components’ alphanumeric positions.

Most modular-fixturing manufacturers provide CAD-based part libraries to aid in the design process. These parts can be incorporated into a computerized plan of the fixture. This aids the fixture designer in planning for future jobs and in creating accurate and clear documentation for repeat jobs.

In use, a modular fixture operates much like a dedicated fixture. Loading and unloading parts will take a similar amount of time, and the cycle time will be about the same.

Most modular-fixturing manufacturers are ready to help users make effective use of their systems. To help a user select the right components, a manufacturer’s representative will visit a shop and take note of its fixturing needs. For specific applications, the manufacturer’s design engineers can develop fixtures in their labs using modular components. These labs also are available for hands-on training sessions that give a shop’s personnel the chance to work with the components under the manufacturer’s guidance.

Modular fixturing shouldn’t be viewed as a replacement for other types of fixturing but rather as a supplement to them. In a competitive market where time to manufacture and time to market are continually being shortened, shops need to be ready with whatever is needed to get the parts out the door. Some applications will call for dedicated fixturing or some other type of workholding. But in other situations, shops are discovering that modular fixturing is the choice that gives them the competitive advantage.

Bob Madewell is vice president of sales and marketing for Te-Co, Union, OH.

Bob Madewell is vice president of sales and marketing for Te-Co, Union, Ohio.