Because they produce chips at high operating temperatures, often with oil-based coolants present, machine tools can easily catch fire. However, if shops plan ahead for this possibility by installing fire suppression systems, they can avoid catastrophic damage to the machine and the shop itself. 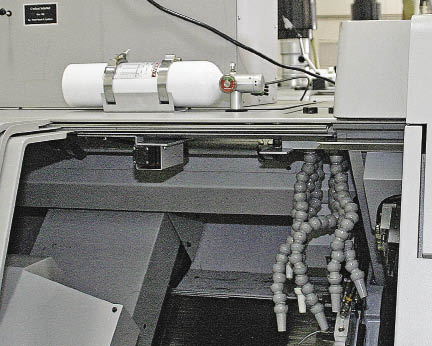 For example, one machine shop suffered 12 fires in 18 months. The causes varied, but included incorrectly applied coolant, chip clogging and operator error. The first fire, fortunately, did not cause much damage because it started when an operator was standing at the machine tool and a fire extinguisher was nearby. Had the fire occurred during lights-out production, the results could have been catastrophic.

The 11 subsequent fires, however, were nonevents because after the first fire the shop installed automatic, Halon-based, unitized-cylinder fire suppression systems on all 26 of its machining centers. 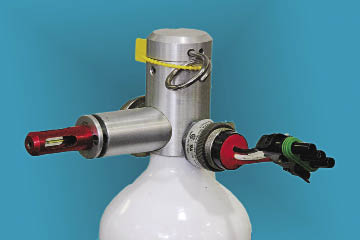 A Halon-based, bottle-type system, such as this Safecraft AT5AGH, can be equipped with a heat-sensitive injection nozzle and a pressure switch that can send an “emergency stop” signal to the machine tool.

• How well does the system work?

• Does it cause any secondary damage?

• How much downtime occurs when a machine tool’s fire suppression system has to be reset after a fire?

• How much downtime is needed to install a system on a machine tool?

The questions are in this order for a reason. First, if the system isn’t effective, don’t bother. Second, if the consequences of its use cause more damage than would a small fire, the system may not be cost-effective. Third, if a shop experiences repeated fires, it will need to consider the costs of downtime needed to reset the system. Fourth, while installation occurs only once, it still represents downtime.

Halon’s two most common forms are H1301 and H1211. The numbering system gives the Halon’s “recipe.” For example, H1301 consists of one carbon atom, three fluorine atoms, zero chlorine atoms and one bromine atom. H1301 is suitable for fixed-position systems, such as for a machine tool’s working area, and H1211 is for hand-held units.

H1301 exits its container as a colorless, odorless gas and is 50 percent discharged in less than 3 seconds. A typical discharge of H1301 is 3 to 5 lbs. H1211 exits as a low-velocity liquid, allowing a person to see where it’s going and giving him about 15 seconds to direct it appropriately before it turns into a gas. H1301 and H1211 are equally effective on a pound-for-pound basis for extinguishing fuel fires.

Halon does not remove the oxygen from a fire; it stops the chemistry of combustion. It goes right to the nature of a fire—high-speed chemistry—instead of attacking the results of that chemistry. When Halon molecules hit the flame front, they dissociate into active ions that inhibit fuel from combining with oxygen. The reaction time can be in the low milliseconds.

A Halon-based, bottle-type system is effective because it can quickly suppress a fire in a machine tool’s work enclosure. (A machine tool does not have to be enclosed for a fire suppression system to be effective, but an enclosure helps ensure a Halon concentration level that prevents reignition.) For example, when ignited, gasoline has a rate of flame spread from 700 to 800 ft./min. A Halon-based bottle system can put out a gasoline fire in less than 1 second. 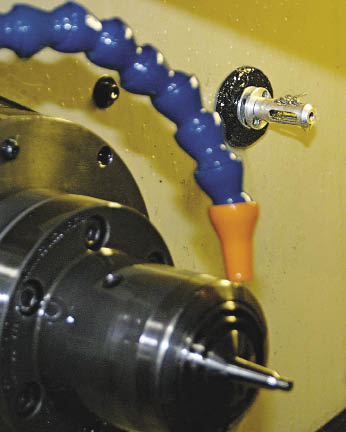 Within the closed environment of a machine tool, a single injection nozzle is typically all that’s needed to suppress almost any fire. In this photo, the red anodizing is eroded from the sensor guard after 3 years of exposure to coolant, but this has no effect on the system’s performance.

Halon is effective when dispersed at a sufficient distribution rate and when the distribution nozzles are properly located. The gasoline fire’s flame front, as noted previously, is moving at a bit more than 10 ft./sec. A Halon volume of 3 to 4 percent in air is all that’s required to put out the fire; the Halon doesn’t have to “bury” the fire to reduce the oxygen concentration, like carbon-dioxide systems do. Nor does it need to cool the entire flame and surroundings like water agents. Once the Halon reaction stops flame propagation, the Halon is free to react over and over again to suppress the remainder of the fire—hence the low concentration needed.

For example, in a 50-cu.-ft. machine enclosure, a discharge of 1 lb. of Halon 1301 will create a concentration volume of 5 percent, sufficient to extinguish most fuel fires. A typical Halon-based fire suppression system raises that concentration by a factor of three to five to provide a margin of safety.

Oil-based coolant, such as that typically used for machining titanium and stainless steel, has an average flashpoint of 350° F, which is far higher than gasoline’s flashpoint, which ranges from -40° to -50° F. When properly cooled, the machining environment stays at room temperature. Even during high-speed cutting, when high-pressure coolant mist is heated, the temperature typically does not exceed 125° F.

However, very hot chips— particularly on machines where coolant is not properly directed—that travel through the coolant mist can cause it to instantaneously ignite. Consequently, although a manual pull or push handle is usually included with an on-machine fire suppression system, a better option is to rely on an automatic system. One popular way to automate a system is to terminate the injection line with a small glass bulb designed to break at a chosen temperature, usually 175° F, thereby allowing the Halon to attack the fire. The 175° F trigger provides a margin about 50° F above the highest “normal” ambient temperature inside the enclosure. Other trigger temperatures can be chosen as well, including 135°, 155°, 200°, 286°, 360° and 500° F.

A Halon-based system doesn’t cause secondary damage, unlike fire suppression systems that use dry chemical powder—typically sodium bicarbonate, monoammonium phosphate or potassium salt—to blanket a burning material, thereby depriving it of oxygen. This powder is typically corrosive and can damage a machine tool. By contrast, Halon is a clean, odorless, colorless gas that leaves no residue.

When a Halon system is thermally or mechanically activated, it fully discharges and automatically shuts down the machine tool. Most shops keep a spare bottle so the tool can be up and running (after fixing the cause of the fire) in 5 minutes.

A complete bottle system for one machine costs about $1,000 and can take as little as 1 hour for a shop person to install. That’s a small price to pay to ensure against a potentially catastrophic fire. CTE 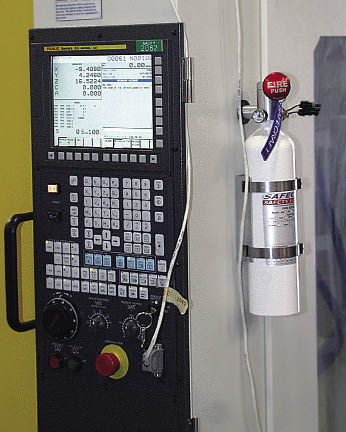 A system’s bottle can be easily modified for mounting in any position, such as this Safecraft AT5AHH push-knob system. Removing the flagged safety pin arms the system. A safety pin attached to the blue flag prevents discharge if a user accidentally pushes the knob. The user must remove the pin to arm the device and then push the knob. There is no danger to personnel from thrust or from inhaling the chemical agent. The system is always thermally armed: When the sensor detects a temperature of 175° F, it will discharge.

How machine shop fires get started

A fire consists of a fuel and sufficient heat and oxygen for the fuel to burn. Take away one of those three elements and there is no fire. Consequently, the traditional ways to stop a fire are to separate the oxygen and fuel or cool the fuel/oxygen mixture to below the ignition point. In a machine shop, fires typically occur because fuels, such as oil-based coolants, are heated to the point where they combine with the ambient oxygen and ignite. This usually starts within the coolant mist, but the process can produce sufficient energy to ignite the liquid coolant as well.

Metals, however, also burn. That starts with the combination of oxygen and a material (oxidation). When the process occurs slowly, it’s called rust; when it occurs fast enough, it’s called fire. What has helped make gold so valuable over the centuries is its resistance to this process. All other metals, however, will succumb in greater or lesser degree to the ravages of oxygen. In fact, the dull patina that freshly cut aluminum gets in just a couple of hours is aluminum oxide, a form of rust.

One metal that burns is steel. Using an oxygen/acetylene torch, a person can heat the steel to a bright yellow glow and then use the torch’s trigger to inject pure oxygen. Sparks go flying, the metal literally burns, and a hole is left where there used to be solid metal. The oxygen is not just pushing the molten steel out of the way; if that were the case, any gas could be used to push the metal out of the way.

Steel, however, is not a good fuel in that when it burns it doesn’t generate more heat than is needed to sustain the process, so the torch’s heat has to remain on the steel and the oxygen trigger has to be activated to continue the burning.

When the oxygen is cut off, the process stops. Then, when everything cools, there are lumps of slag, not steel, on the shop floor. Quite literally, steel burns in the same fashion as a log—the slag is the ash.

There are metals, though, that create self-sustaining fires. If the fuel/oxygen combination generates enough heat, the process becomes self-sustaining. If it doesn’t, the fire goes out. Both magnesium and zirconium will sustain a burn once lit.

Also, if a shop is machining a metal with a low flashpoint, the cascade is catastrophic.