Effective communication always has been critical to running a successful manufacturing operation. As part manufacturers start and continue down the Industry 4.0 path, shop managers and personnel are not the only ones who must speak with each other. Humans and machines need to communicate too, and machines must have conversations as well.

The corporation worked with other companies to develop OPC Unified Architecture, a machine language for Industry 4.0 that standardizes access to devices and systems and enables manufacturer-independent data exchange.

“The main concept for the factory of the future is that the only fixed things in the factory are going to be the walls,” Dariol said. “Everything else is going to be repurposeable or adaptable, changeable, movable, following the flow of the order and making sure that, for example, robots become cobots that are smarter and better suited for working together with humans.” 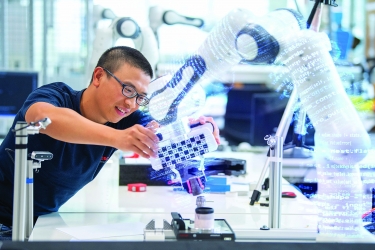 Since 2012, Bosch Rexroth says it systematically has led factories — both its own and those of customers — into Industry 4.0. Image courtesy of Bosch Rexroth

“Right now,” he said, “when companies think about automation, conceptually speaking, they tend to think first about how we can make things faster — how can I make these processes more efficient? I haven’t seen where the tendency is to make sure employees are safer. It’s a byproduct but not the main goal.”

However, that attitude is changing, “and I’m glad to see that,” Carranco said. “Safety, at least today, is more enhanced with processes and decisions that make people on the floor safer, not necessarily about putting technology around you to make you safer.”

In his white paper about the top five reasons to automate manufacturing, he stated that U.S. manufacturers pay nearly $1 billion per week in workers’ compensation due to injuries on the job, according to the Occupational Safety and Health Administration. Automating production processes can help improve employee safety by removing workers from dangerous procedures, enabling faster responses to emergencies with real-time monitoring, and using safety planning software to simplify safety protocol updates and emergency response plans.

Carranco said the first step in implementing automation, which is a key element of an Industry 4.0 environment, is to make sure that manufacturing processes support the automation equipment.

“If the process doesn’t support that automation,” he said, “all they are creating is a big problem because they are not thinking through.”

“There are a number of ways you can automate a shop,” Carranco said, “but if you don’t have the processes and the people who understand the ins and outs throughout the entire process, it could create a problem.”

Having a high level of communication on a production floor requires connectivity.

“You allow your machines to talk to you,” Dariol said, “and then you start collecting the data and building your knowledge base, giving you complete visibility of everything that is going on.”

He said a critical area to keep an eye on is condition monitoring so end users can understand the health status of their machines and be able to make decisions proactively and quickly because of the large amount of data that’s
available.

Dariol said by having a big know­ledge base, predictive maintenance is possible, such as changing a mechanical component before it fails.

“You work toward intelligence and wisdom,” he said. “You want to be able to forecast the trend of your machine and look into the future.” 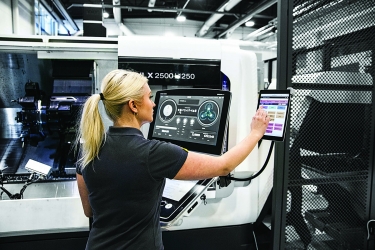 Being inundated and incapacitated with too much data can be avoided by implementing the proper strategy. For example, Carranco said it’s virtually impossible to manage one record at a time and evaluate production status.

“That’s why we provide the solutions to tell that you have this big data set and don’t worry about these 100-plus or 1,000-plus records,” he said. “Just be concerned about these five because they are not good.”

Carranco said managing by exception is possible with technologies, such as the Industrial Internet of Things and ERP software, because they are interconnected by design. The goal is to ensure that activities go as planned.

“And if they go in a certain way, you are guaranteeing the quality is good, delivery is good, pricing is good,” he said. “It’s supposed to be good because you have that defined already. When things start going not according to plan, it’s when actions need to take place.”

To achieve high-efficiency gains, part manufacturers must prepare and make correct choices early on — “getting it right from the start,” said James Thorpe, global product manager for Sandvik Coromant U.K. (He’s based in Leicester, England, and Sandvik Coromant Co. is headquartered in Fair Lawn, New Jersey.)

He said key preparation components include method optimization and automated tool and cutting data selection. However, operation planning is an area in which customers see significant waste, he added, and automation can use cutting data in artificial intelligence-driven software to improve machining efficiency and the quality of machined components later in the value chain.

Thorpe emphasized the importance of creating excellent operation plans enabled by high-caliber data that secures component quality and efficient lead times. He said those times are reduced by minimizing the number of production starts, which is a benefit of Industry 4.0 technologies, such as machine learning and sensors.

“Gradually,” he said, “our tools will have more sensors sending vital data to the machine tool.”

For example, Sandvik Coromant’s Silent Tools Plus toolholders with embedded connectivity inform an operator or a machine about the cutting process, including surface quality, vibration and tool wear.

Marco Siragna concurred that more sensor technology is being integrated directly into cutting tools. He is head of product management at BIG KAISER Precision Tooling Inc. and based in Rümlang, Switzerland.

“As well as condition monitoring, there is a very definite trend toward networking all the systems and components in a production environment,” he said. “This means that customers will increasingly be asking for tool data, which we can make available to them in a variety of formats.”

Siragna said this doesn’t mean that the company simply latches on to every digitalization trend without a moment’s thought. 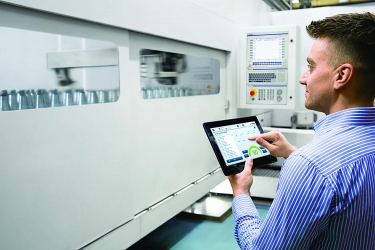 “On the contrary,” he said. “We examine exactly what we can implement and how, and we ask what added value it will yield for the customer in areas such as direct measurement systems or wireless control and monitoring systems, where a lot is happening at present.”

Carranco said running second and third shifts can be cost-prohibitive, but an unused manufacturing plant at night is a wasted asset.

“Automating your manufacturing systems puts your biggest asset to full use without the need for humans,” he said.

“The value is being able to run lights-out production and unmanned cells without risking broken tools or even broken machine spindles,” he said, “which results in maintenance cost and major downtime.”

Thorpe said one of the biggest threats to unmanned production is unpredictable tool life. For a tool to properly support automated production, minimizing continuous, controlled wear and eliminating discontinuous, uncontrollable wear are the keys to success.

“Driving automation through process monitoring and control is another way of stabilizing tool life and reducing the risk of unplanned downtime,” he said.

Of course, manufacturers never should implement a technology just for its own sake, and it is imperative that costs don’t go out of control when an implementation makes strategic sense. Thorpe said one way to minimize the cost and time to realize a return on investment from connecting machines and gathering the data needed to improve efficiency is through software subscriptions.

Dariol also sees a high level of value in software as a service, in which a manufacturer purchases access to software rather than a software license.

“The vendor is giving you access to their ecosystem,” he said.

Dariol said by accessing the ecosystem of a software developer, end users can generate solutions similar to how the business model functions for smartphones.

“The real customers of Apple’s iPhone are not the users who are buying the smartphones,” he said. “The real customers are the developers. They are building the applications on the Apple devices and therefore increasing the value the user of the iPhone perceives.”

Even if manufacturers understand how Industry 4.0 fits into their existing production setups, many regard the addition of Industry 4.0 technologies to be expensive when it doesn’t need to be, said Bijal Patel, senior digital machining specialist at Sandvik Coromant.

Carranco said he has seen instances when customers get an ROI within six months of implementing a piece of automation equipment or a process by not only boosting productivity but increasing sales and expanding product lines. The general rule is to be paid back in no more than a year, he said, unless workflow is expected to last for an extended period.

“Sometimes we have customers working for government contracts,” he said, “and those contracts are five-year engagements and sometimes longer.”

Nonetheless, most manufacturers see no reason to upgrade setups and processes.

“Roughly a quarter of manufacturers have started the Industry 4.0 journey,” Thorpe said.

Patel said this level of adoption is curious because the Industrial Internet of Things has the potential to benefit manufacturing more than any other industry. Many companies may continue to sit on the sidelines while other businesses embrace digitalization and connectivity. MarketsandMarkets Research Private Ltd. reported that the IIoT market is set to grow from $68.8 billion in 2019 to $98.2 billion by 2024.

“The transformation from linear plant setups into dynamic and interconnected systems is one of the greatest challenges of our times for machine shops,” he said. “The IIoT will continue its rapid growth and make countless productivity, profit and maintenance advantages available to machine shops that are willing to overcome their reluctance to embrace Industry 4.0.” 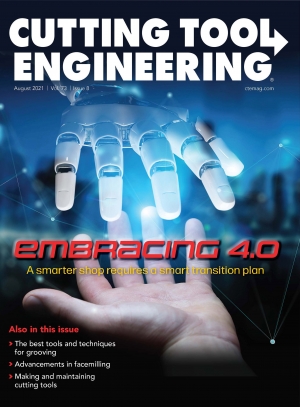