Extending tool life is always a welcome improvement. Even before wear became visible, stamping tools, such as arbors and die plates, from voestalpine Rotec GmbH had to be replaced because of minor fracturing at the edges.

Headquartered in Krieglach, Austria, the company is part of the metal forming division and designs and builds equipment for manufacturing pipe and tube components, as well as belt tensioning tubes for the automotive industry. Overall, voestalpine Rotec has 11 manufacturing facilities in North America, Europe and Asia.

“To be able to make our products at internationally competitive cost, our company is utilizing continuous improvement processes,” said Hannes Winkler, assistant to the plant manager.

He said burr formation on production parts indicated that a tool was worn before edge fracturing became apparent. Worn edges on stamping tools frequently were reworked by hand with a diamond file to remove wear and radius the edges, but this operation seldom was able to extend tool life.

“As this is not a repeatable process,” Winkler said, “nobody is able to produce a uniform radius by hand.”

One supplier was Rösler Oberflächentechnik GmbH in Untermerz­bach, Germany. (Rosler Metal Finishing USA LLC is based in Battle Creek, Michigan.)

“From my previous occupation at a supplier of motor sport components, I knew that Rösler Oberflächentechnik builds such equipment,” Winkler said. “That is why I contacted Rösler first.”

“This reduced not only the capital expenditure but also resulted in lower operating costs,” Winkler said. “Of course, the quality and long service life, as well as the high availability of the Rösler equipment, also played an important role in our decision.” 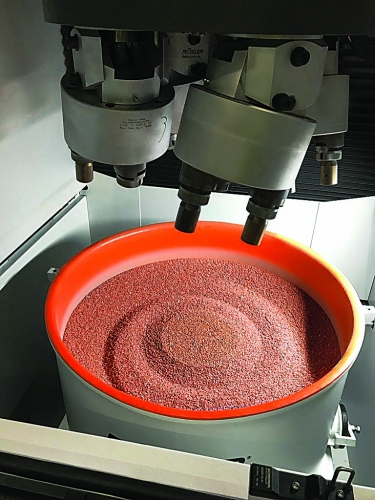 The processing bowl of the R 4/700 SF drag finisher can be exchanged by a forklift to switch from one application to another without having to replace the processing media. Image courtesy of Rösler Oberflächentechnik

The drag finisher is carousel-equipped with four rotary spindles, and three workpieces can be mounted on each spindle, according to Rösler Oberflächentechnik. The carousel and spindles have separate drive motors, allowing the setting of different rotary speeds for the carousel and spindles. The processing media for the application consists of crushed walnut shells and Al2O3. A forklift is used to change bowls.

The tools to be finished are mounted manually to custom workpiece fixtures, which are attached to the spindles with quick-connect couplings. To facilitate this procedure, an operator moves the spindles to the load/unload station with the touch of a button.

Once a processing program has started, the carousel with the spindles is lowered so the rotating spindles are immersed in the media. The carousel and spindles move clockwise and counterclockwise at the defined rotary speeds. At the midpoint of the cycle, which varies from 15 to 45 minutes, the rotary direction usually is changed to ensure even edge radiusing on all sides.

“The new mechanical drag finishing system produced such good results that the usable (life) of these components could be practically doubled,” Winkler said. “And in some instances, it could be increased by a factor of 10.”

As a result, he said the company raised the number of tool types processed in the system to 20. The increase will help achieve a return on investment in less than two years.

In addition to edge radiusing, voestalpine Rotec is considering a polishing application.

“At the moment, we are conducting processing trials,” Winkler said. “If the results are as we expect, we will purchase a second processing bowl with the required processing media.”