A special form tool just fractured, and much to the dismay of the machine shop supervisor, that was the last special form tool in inventory. Worse yet, the lead time for a replacement is long. If we’re talking glass half full, this is, at best, a good learning experience to help the shop avoid this scenario in the future.

Let’s consider one surefire solution: purchasing a CNC tool and cutter grinder to produce cutting tools when needed and resharpen them as they wear down.

There is a need for job shops and other part manufacturers to bring CNC tool grinding in-house, and the need is increasing because delivery times for specials are getting longer, according to Eric Schwarzenbach, president of Rollomatic Inc., Mundelein, Illinois. He added that the delays are due to the strong U.S. economy and most tool grinding companies being filled to capacity. 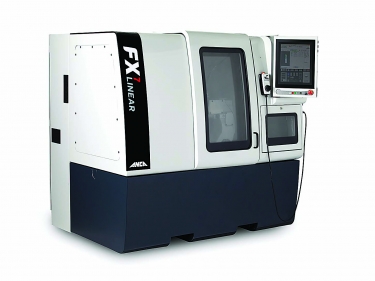 Anca sells about 20% of its tool and cutter grinders, such as the FX7 Linear, to machine shops. Image courtesy of Anca

“Maybe they are even hesitant to add more equipment because of uncertainties in the economy,” Schwarzenbach said about the tool grinding companies. “It is a good time for job shops to think about bringing a cutter grinder in-house.”

But Strausak Inc., a member of the Rollomatic Group, does build grinders for resharpening tools, noted Joe Kane, president of the Mundelein-based company. Strausak’s staple model is the U-Grind, which he estimates is used about 40% of the time for regrinding. 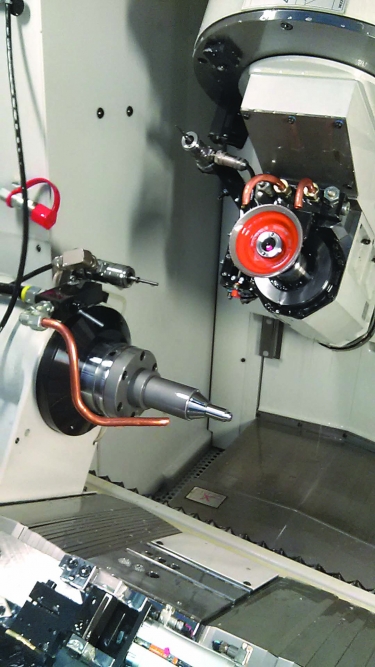 Similar to other equipment investments, shops that purchase a CNC tool grinder target a two-year payback.  Image courtesy of Schütte

The 5-axis CNC tool grinding machine with an integrated six-position wheel changer helps a shop reduce setup time, which is what shops spend the majority of their time performing, Kane said. Because job shops typically operate in a high-mix, low-volume environment, he added that they lose money when a machine tool is not running.

The machine also comes standard with a quick-change collet system, a tool probe and a wheel probe. “The thermal stability of the machine allows that first tool to come off right,” he added. “It is just little things like that that lend itself to being a quick-change job shop machine.”

Star Cutter Co. is another grinding machine builder that sells tool and cutter grinders to job shops. Aaron Remsing Jr., product manager for the Farmington Hills, Michigan-based company, said it’s not necessarily the number of machines a shop has that makes it a good candidate for grinding tools in-house. “It is a lot less based on size and more based on tool consumption. If you are spending 50, 60, 70, 80 grand a year in tool reconditioning, you really start to make the justification for bringing it in-house.”

One machine shop, for example, grinds tools in-house because 10 of its machines are multiple-axis Mazaks that hold 2,300 tools, Remsing said. 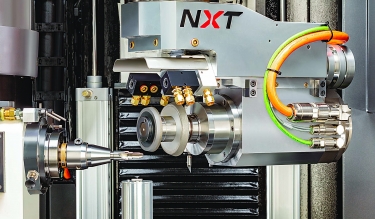 The Star NXT tool grinder, which provides a large grind zone with a small footprint, can run small- and large-diameter wheels. Image courtesy of Star Cutter

Not having to send those tools to a regrinding company is certainly one motivating factor for buying a CNC tool grinder, but many end users see a bigger benefit in being able to improve processes or make changes to standard tools, such as modifying the diameter or a specific geometry, according to Remsing. “Having that flexibility of changing a tool or making a custom tool right there on the spot, that’s the key for them.”

In addition to machine tools, Star Cutter manufactures cutting tools, and Remsing said the company often targets large machine shops for tool grinder sales. “If they are going through a high volume of tools, they want to at least have a conversation.”

He added that Star is ramping up its focus on the job shop market as lead times for specials increase. Plus, the company expects job shops to account for 10% of Star’s tool and cutter grinder sales next year.

Anca already sells about 20% of its CNC tool and cutter grinders to machine shops, said Pat Boland, joint managing director for Anca Australia, Bayswater, Australia. (Anca Inc. is in Wixom, Michigan.) A suitable prospect is based on not only tool consumption but the types of tools being applied.

“It seems that screw machine shops where there are a lot of step drills and custom tools being used, which are also expensive tools, tend to justify the purchase relatively easily,” he said, “whereas a company that is mainly using cutters with inserts is a different kettle of fish.”

Turn Out the Lights

Any of the company’s models are suitable, Boland added, but those targeting the high end of the lineup are looking to perform unattended resharpening. A key feature that enables lights-out production is the use of radio frequency identification tags for each cutting tool and having the machine read the tag, which contains all the necessary regrind information, when the machine is loading a tool.

“That works very well in a very structured machine shop where all the cutting tools are known,” he said. “Every time a new tool is introduced, you are required to reprogram the regrinding sequences.” 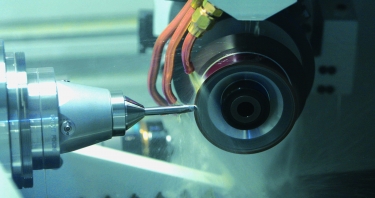 Controlling tool size is another important automation element. “Probably the biggest driver is in-machine measurement,” Boland said. “At a micron level, we can measure the external features of the tool using a laser measurement system.”

Matt Morgan, regional sales manager for Schütte Corp., Jackson, Michigan, concurred that in-machine measurement is important, but the machine tool builder primarily offers a touch probe for its tool and cutter grinder, the WU335 Linear. He emphasized that end users frequently probe tools to ensure that the tools produced during unattended grinding will not experience an unacceptable level of runout when applied. “The software can be set up to compensate automatically for tool runout.”

He noted that the company’s single cutter grinder model can also be configured to produce medical parts. “This is a very versatile model. We can do free-form surface grinding for medical knees, for example,” Morgan said, adding that it can grind the flutes of cutting tools up to 19" long.

Automation’s role at job shops, added Strausak’s Kane, is not necessarily to satisfy production requirements but to help bridge the skilled labor gap. For instance, a shop might need to grind only 10 tools, but each could have a cycle time of 30 minutes. “The payback is there because it allows somebody to go do something else,” he said.

The return on investment for a tool and cutter grinder is easy to justify when a shop regrinds a large quantity of tools, especially form tools that have long lead times, Kane noted.

“We’ve had customers tell us they are waiting 12 to 14 weeks,” he said. “The tools are expensive, so they are only buying what they need. It puts them in a pretty precarious situation when they are on their last one and they might have to wait three months.” 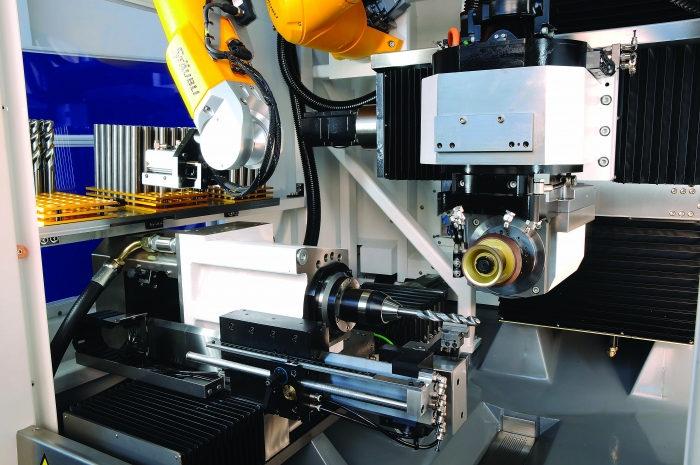 According to Rollomatic’s Schwarzenbach, U-Grind doesn’t require all the peripheral equipment often needed to run a tool and cutter grinder, such as one from Rollomatic. Because the Strausak grinding machine can probe and dress wheels inside the machine, it doesn’t need a stand-alone wheel presetting station and an external wheel dressing machine. Not only do those external pieces of equipment cost money, they consume valuable floor space.

Floor space is at a premium at a vast majority of shops, and the tool grinder being installed is more of a business expense than a revenue generator, said Star Cutter’s Remsing.

Star Cutter’s NXT grinder can produce a tool up to 10" in diameter and 16" long in a machine that is roughly 7.5'×7.5', he added. “We did as much as we could possibly do to have a small footprint with a very large grind zone.”

Although the Schütte machine has a footprint of about 6'×6', Morgan noted that it does require a coolant system with a chiller, which is a bit larger than the machine. “With the linear motors, there is no ballscrew involved, so the motors are creating heat and we have to keep them cool.”

Similar to other equipment investments, shops that purchase a CNC tool grinder target a two-year payback, Morgan said, noting that the base Schütte grinder costs about $400,000.

Regrinding tools in-house can also significantly reduce tool costs by increasing the number of regrinds. Anca’s Boland explained that because the cost of internal grinding is low, a shop that reduces the amount of time a cutter is used before regrinding it enables the shop to regrind the cutter many more times than when outsourcing the task.

“One endmill they showed me had 16 regrinds,” he said about a shop that uses the technique.

Even when investing in a CNC tool and cutter grinder makes economic sense, some large shops outsource tool production and reconditioning because it is not a core activity, Boland said.

Another option that Boland has witnessed at a few companies involves contracting a regrinding company to operate a regrinding service in their plants. “They get the advantages of quick turnaround and dedicated service, but they don’t have the requirements of managing the operation, training or finding skilled operators and so on.”

Numerous machine shops have employed manual machines when reconditioning tools. However, as more and more skilled manual tool grinders retire, machine shops are finding that it is impossible to replace them, according to Anca’s Pat Boland. As a result, those shops look at buying a CNC replacement.

Although someone at a shop must program a CNC grinder, the software is getting easier and easier to use, said Matt Morgan at Schütte Corp. “Initially, when they first get their machine tool, there is quite a bit of training and support after the sale, but after a short time they can pretty much stand on their own.”

Aaron Remsing Jr. at Star Cutter Co. concurred. “I came from machining centers and lathes, and I think the software on these grinding machines is much more adaptable and easier.”

A shop probably doesn’t have a cutting tool engineer on staff, but it must have somebody who understands tool prints and geometries, such as a manufacturing engineer or machinist, Remsing said. Therefore, it’s just a matter of cross-training people to run a CNC tool grinder.

In addition to producing tools more consistently and accurately than manual grinding, a CNC grinder makes higher quality tools. This result is because manual grinding is done dry while coolant is applied during CNC grinding, said Rollomatic Inc.’s Eric Schwarzenbach. Without adequate coolant, a grinding wheel can impart a poor surface finish or destroy a carbide tool, he added. “Carbide can also burn, but often the material is more prone to chipping and the cutting edge is more saw-toothed than a good edge.” 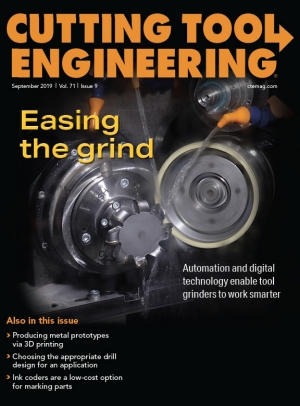