Workholding involves much more than slapping a part in a vise or chuck and pushing the cycle-start button. Beyond the basics lies a whole universe of custom chucks, clamping systems, horizontal and vertical vises, and hydraulic, pneumatic and manual fixtures.

Any workholding project must consider the scope of the machining to be completed in a given setup. For instance, if you decide to rough and finish a part in the same chucking, can the machine tool hold the tolerances? Because metal moves when squeezed, heated and chilled, can you be sure the part won’t change shape after it’s removed from the workholding?

Workholding for turning is mainly done with chucks or fixture plates on chucks, and the workpiece is clamped on its internal or external features. Locating should be on a primary face for initial turning and on a machined face for subsequent operations.

The same applies to workholding for turning and milling. A part may be any shape, of course, but your first rule is to try and contain all machining to the area bounded by the part’s three primary locating points. This is always the rule whether you are turning or milling the part or turning the tool. The goal of workholding setups is stability because it minimizes workpiece vibration during the cut.

It’s OK to machine outside the clamp point lines as long as the areas are close to the clamps. Work supports are needed for large, flat parts or if the part’s periphery has arms or extensions. 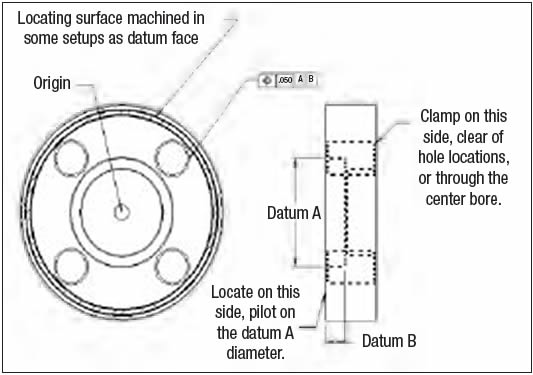 Geometric dimension and tolerancing for a part with four holes drilled around a center bore. Locating surface is machined in the same setup as the datum face. The part should be clamped on the turned face shown by crosshatch parallel to datum B and centered to datum A.

In addition to evaluating the mechanical features of a workholding setup, shops must also consider how part dimensions and the relationship of the geometrical elements necessary for part functionality, or “geometric dimension and tolerancing” (GD&T), will be affected by machining.

Let’s say you need to drill four holes around a center bore and achieve a tight hole tolerance and maintain a true position requirement to the bore “A” and a perpendicular requirement to datum face “B” as shown in the figure. Your first operation is turning, in which A and B are machined in the same setup. Drilling is next, in which the holes must be finished in relation to A and B. Normally, you would set the part down on datum B and center datum A for the origin.

However, the diameters of the holes’ positions are outside the diameter of datum B. If you clamp down on the ID datum face B, holding true position will be difficult because the part will want to tip out of position due to pressure from the drill. So don’t clamp to that feature.

If you turn a parallel face on the part outside the holes’ centerline locations during the same operation as when finishing the inside ID face, you can maintain the parallelism of the locating face to the datum callout and incorporate that into the workholding setup. This will keep the part stable and help meet the GD&T requirement for the holes to maintain their true position to the center bore.

About the Author: Joe Mason is cost estimator and process engineer for United Machining Inc., Sterling Heights, Mich., a supplier of high-heat manifold, turbine and exhaust components. Contact him at cncgcode@earthlink.net.