For turning applications, there are many types of workholders. One is the chuck, a universal holding device capable of OD or ID clamping. It can be manually, pneumatically, hydraulically or electrically actuated.

Lathe chucks are mounted horizontally, vertically (facing up) or inverted (facing down). The chuck is bolted to a machine-mounted adapter plate. A drawtube is connected from the rear of the chuck, and the CNC or operator actuates the drawtube to clamp and unclamp the chuck. 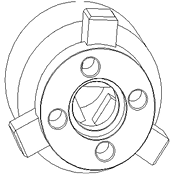 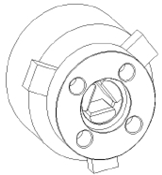 Workholding components, sometimes called top tooling, are mounted to the chuck face. (Top tooling components are sometimes, but not always, jaws.) The workpiece is placed in the center of the tooling, the drawbar is actuated and the part is clamped in a defined manner based on the type of chuck being used.

The jaws (or another type of top tooling) slide to and from the chuck centerline. There can be two to eight jaws, depending on part shape, configuration and clamping area available. Figure 1 is a typical 3-jaw OD chuck.

When using a 3-jaw ID chuck (Figure 2), the part ID may or may not have been machined prior to setup. All chucking operations require a specifically designed process, because to function correctly the jaw diameter must closely match the part diameter.

Figure 3 shows a part being held between centers that was previously machined on the ends. This allows the part to be completely turned in a single operation, which is common for finish turning and hard turning applications, such as turning shafts with tight tolerances from end to end. Turning between centers with face drivers requires a chuck, a driver mounted in the chuck and an opposing center for stability. 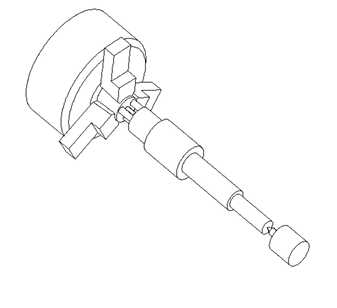 Figure 3. A part being held between centers.

As with most workholders, specific chucking solutions for unique cutting requirements are custom-designed. For example, Jade Tool Inc., Traverse City, Mich., has been designing and building custom chucks for more than 20 years. Among other products, the company has developed pin chucks for roughing and finishing. The following examples are custom chucks designed by Jade Tool.

A pin chuck (Figure 4) pulls the part against the stop face (end stop) and has jaws that rock side to side to ensure secure six-point contact on the part, even if it is out of round. 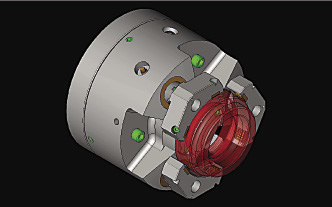 A collet chuck (Figure 5) can be an ID or OD gripping chuck. It grips with either a pullback action to help pull the part against the end stop or a static grip for thinner parts that may be distorted by the pullback action.

A diaphragm chuck (Figure 6) can also be an ID or OD gripping chuck. It is normally used for finish machining, grinding or inspection. Because of its low-profile jaws and built-in chip slots, it can also be used for milling. 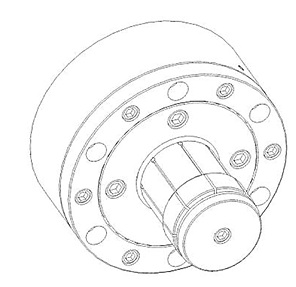 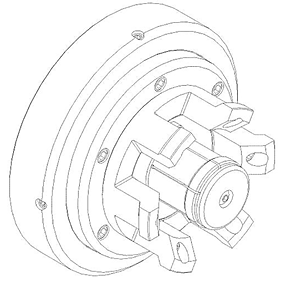 Figure 5. A collet chuck can be an ID or an OD gripping chuck. The chuck on the top is an ID clamping chuck with stops on the back plate, and the lower chuck has custom stops for a specific part.

Jade Tool also offers a “soft-touch” chuck (Figure 7), which can be an ID or OD gripping chuck as well. This chuck, which uses jaws, centers and supports a part around its entire ID or OD and has a patented design to hold thin-wall parts without distorting them. Thin-wall parts are a growing challenge because they are being used more frequently in automotive components to reduce weight.

How a part is clamped is directly related to the print that defines the part’s most important features and how those features are related.

Cast or forged round parts should have a machine start dimension taken from the primary datums. If primary datums are not designated, then a review of the part finish requirements determines the required initial and subsequent finish workholding.

In most circumstances where the part’s OD, ID and ends require finishing, turning consists of roughing and finishing. But sometimes only one of these turning operations is necessary.

The part print defines the locating scheme and subsequent chucking requirement. The part’s geometrical tolerances on the finishing print will complete the workholding plan. It is extremely important to understand the required tolerances, especially when finishing part features in multiple operations or setups. CTE

About the Author: Joe Mason is cost estimator and process engineer for United Machining Inc., Sterling Heights, Mich. He has worked in the metalworking industry since 1978. Contact him at cncgcode@earthlink.net.