Presented here is the second part of a two-part series of columns about the importance of becoming familiar with CNC programming code. The following describes the steps involved in manually writing a program.

First, begin and end all programs with a percent sign (%), which tells the controller where a program starts and finishes. Then, insert a program number and follow it with a description of the part and setup number in parentheses, such as O00101 (adapter plate setup #1). Program numbers start with the letter O followed by a five-digit number. The program numbers can be whatever you choose. The controller ignores anything in parentheses, so the information inside parentheses is for your benefit only. 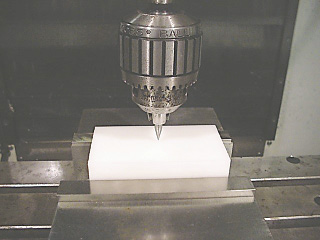 The X and Y starting point, or G54, is set roughly to the center of the part in the sample program. Image courtesy J. Harvey. 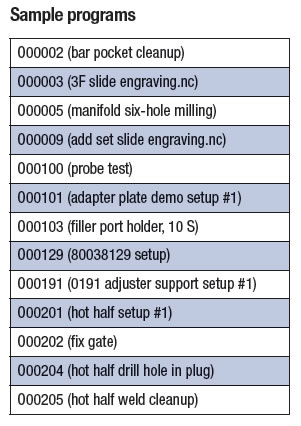 Insert your safety line coding so the program runs as intended. Some codes erase commands in the controller’s memory that could cause a program to stop running. Your controller is likely set up with a number of defaults, which would make some—if not all—of these codes redundant and unnecessary.

However, having a strong safety line at the beginning of programs gives you peace of mind, because you know programs are going to start consistently. Furthermore, there is no execution time associated with using them. The following are some examples.

Your post-processor, which is the software that spits out the code for a particular machine, can be set up to output whatever safety code you prefer. Next, call up a tool number, insert a tool-change command and follow with a description of the tool in parentheses, such as T1 M06 (#3 center drill). T1 is the center drill that will be installed and M6 is the command that tells the machine to go ahead and install the tool. M06 functions the same as M6. In other words, the zero between M and 6 is meaningless. Similarly, T01 functions the same as T1.

Insert a “rapid” command and a starting-point command. Then, tell the spindle where to go in X and Y. For example, G0 G54 X0 Y0. G0 tells the machine to move fast. On our machines, the default rapid speed is 400 ipm when used at the 100 percent setting. We can override the rapid speed using the percentage buttons on the control panel. When testing a new program, the rapid speed can, and should be, overridden to a slower rate.

G54 is the zero starting point from which all X, Y and Z moves refer. In this case, I set the X and Y starting point to the approximate center of the part by locating the center with a pointer.

There is extra stock on the sides to be removed, so the starting point in X and Y does not have to be precisely accurate. The pointer position is then input into the work offset screen in the G54 register for X and Y. If more accuracy is needed for setting the starting point, an edge finder, an indicator or an electronic probe could be used.

I could have chosen a different starting point, but having the starting point at the center of the stock makes following the moves in this program easier.

If the starting point gets screwed up for any reason, you’ll likely end up scrapping the part if you don’t catch the error before cutting
material.