Whether working with static or live tools, anytime you change a tool, you’re not making parts. That makes a quick-change tooling system—in which the changeover time is reduced to mere seconds—worth consideration.

“Live tools especially are not easy to take in and out of a machine,” said Preben Hansen, president of Heimatec Inc., Prospect Heights, Illinois. “When you’re changing cutting tools, it’s nice to have a quick-change system where you can preset the inserts outside of the machine so you know exactly the tool length going in.” 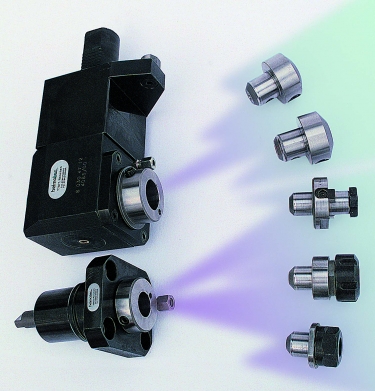 Heimatec makes the HT Quick Change tooling system for use with its line of live tools and angle heads, allowing them to remain permanently mounted in the machine. A removable insert holding the cutting tool easily locks into the live tool. Inserts are available for various components, such as ER collets, side lock holders and facemill adapters.

“To change the tool, a single clamping taper screw is loosened up on the live tool cylinder guide; the insert comes out and you put a different one in,” said Hansen, who added that for a minimal cost, a machinist can have another insert sitting on the side ready to go. “When a part’s being changed, they just put in the new insert. The changeover is very quick versus taking the live tool out of the machine and having to reset everything.”

There are two basic uses for a quick-change tooling system: production and running a family of parts.

“A lot of production shops know a drill will last for, say, a thousand pieces before it dulls and then they have to replace it,” Hansen said. “With a quick-change system, you can have a set of cutting tools preset to the same dimension, ready to go. So you just take out that tool and put another one in—and there’s no downtime involved.”

At the same time, Jared McKown, operations manager at T.M. Smith Tool International Corp., Mount Clemens, Michigan, sees a huge benefit for those who make many different parts and do changeovers frequently, even multiple times a day.

“Say, for instance, you’re running several related parts where one needs a ½" hole, the other one needs a 3⁄8" hole,” McKown said. “You’re able to change between those two tools much quicker than if you actually had to take out the holder for the ½" and then put in and set-screw down a new holder for the 3⁄8".”

T.M. Smith offers a couple of quick-change systems. These include an extended range of ball-drive, quick-change tap holders and tap adapters, from very small taps up to 2" taps, with different types of coolant-through designs and collet-style adapters.

In addition to its tap holders, T.M. Smith makes a quick-change drilling system, which was originally designed to fit only spindles specific to these holders. Now, with the help of quick-change sleeve adapters, any lathe with a straight-bore lathe block can become quick-change tooling.

The drilling system uses two styles of connectors: the Ball-Lock and Smith-Lock. Both can be used on CNC lathes, screw machines and automotive (straight bore) and Tru-Taper spindles. The holder consists of two parts: an over-spindle adapter (OSA), either in the Ball-Lock or Smith-Lock style, and the matching toolholder. 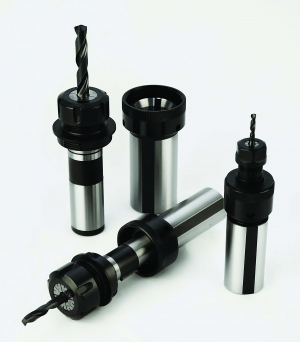 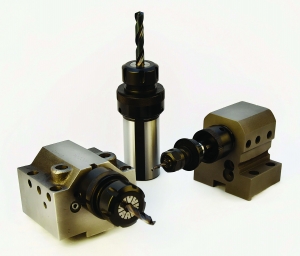 The T.M. Smith Ball-Lock system is also a two-piece system with ball bearings around the ID of the OSA.

“When you pull forward on the OSA shell, it releases the ball bearings, allowing them to move slightly inward, and then you’re able to insert the toolholder,” McKown said. “Once you have the holder in the adapter, you release the shell back into its resting position, which locks the balls onto the taper of the holder.”

In addition to switching drill sizes, the T.M. Smith quick-change drilling system gives the ability to switch between drilling and tapping with the help of conversion nuts.

McKown explained that shops must take both the benefits and disadvantages into consideration before investing in a quick-change tool system. Because there are costs to implement any type of system, benefits have to outweigh those costs. “A lot of times, that’s based on the job itself—how many times you’re changing a tool in a specific period and how long it takes to change a tool,” McKown said.

Two considerations are space in the machine and part and fixture geometry. According to McKown, someone changing a tool only once a shift might not be reducing much downtime but may be eliminating difficulty if changing tools is easier because of the design of the machine. Regarding space, small machines can complicate options for quick-change systems.

“For example, you might not be able to reach both hands into the machine to operate our Ball-Lock system, but you may be able to use our Smith-Lock design, where you can change the tool with one hand by just turning the shell a quarter turn, then pulling out the toolholder or putting another one in,” McKown said.

An important consideration with a quick-change system is the potential for less rigidity, which could lead to poor surface quality and increased tool wear.

“I believe that a quick-change system, because it’s two pieces, is not optimum for all applications,” Hansen said. “The repeatability and accuracy are always going to be there, but there are some applications where a quick change would not be as rigid as a standard toolholder. It’s because you’ve added in a piece and you’re extending it off the nose, so the cutting tool is further away from the bearings of the live tool.”

In spite of these considerations, Hansen and McKown both find that today’s customers want flexibility and the ability to easily change tools.

As an example, McKown pointed to a customer that specializes in the production of internally threaded fasteners. The company implemented the Ball-Lock quick-change system on 25 screw machines and saw a decrease in tool-change time of 40 minutes per machine per shift. “The quick-change system allows the operator to change tools with a ready-to-go preset toolholder with very little ‘door-open’ time,” McKown said. “The customer mostly uses quick-change drill holders but through the use of Ball-Lock quick-change conversion nuts has implemented the system for tapping and reaming operations as well.”