Like their predecessors, the latest multitasking machines handle two or more processes, each of which traditionally would require a different machine. As always, combining processes in one of these models reduces overall setup time and floor space occupied by machines while also eliminating inaccuracies that result from moving parts from one machine to another. What’s new, however, are a host of features and innovations aimed at making the current crop of multitasking machines more capable and easier to use than before.

In the machining industry, the word “multitasking” usually brings to mind machines that can handle both turning and milling. These include lathes that can mill, normally referred to as turn/mill machines, and mills that can turn, usually called mill/turn machines, said Jeff Wallace, general manager of national engineering at DMG Mori USA Inc. in Hoffman Estates, Illinois. He said turn/mill machines offer very long x-axis travel like a lathe, making them a good choice for creating lengthy components that need both turning and milling. On the other hand, he said, shorter components that require both operations might be a better fit for mill/turn machines. 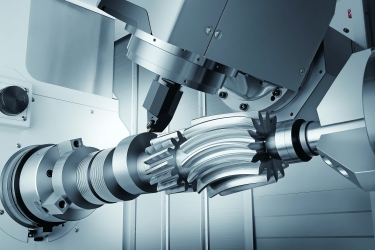 DMG Mori USA’s latest lathe-based multitasking machines are a refresh of the company’s NT series. Among the features offered by these NTX machines are software programs called technology cycles, which make it easier for users to program the machines for special tasks, such as gear hobbing. Instead of programming a hobbing sequence by entering traditional commands, users simply enter relevant data into a table via a human-machine interface. Then the technology cycle takes over, producing the G code needed to cut a part. The business now has 42 such programs in its technology cycle library.

A more recent development from DMG Mori USA is its new DMU/DMC 65 H monoBlock mill/turn machine for complete machining up to 1,200 rpm. For greater stability, this machine features stiff construction from one casting. The machine also includes a telescoping spindle for faster movement.

“A traditional mill of that type moves a large, heavy column that carries the spindle,” Wallace said. “But this machine just moves the spindle and carrier in the z-axis, which allows very fast acceleration and deceleration rates.”

Like all mill/turn machines, the DMU/DMC 65 H monoBlock is easier to automate than lathe-based alternatives. He said this has become more important than ever in the COVID-19 environment.

“Everybody is rethinking how they do business,” Wallace said, “and there is a much greater focus on automation and running machines even longer unattended. We offer many off-the-shelf automation solutions for mill/turn platforms. The mill/turn platform is a palletized system, so we can put a pallet changer in front of a five-axis mill/turn.”

He said turn/mill machines are more difficult to automate because individual parts rather than pallets must be moved. So parts usually require automation, such as stand-alone robotics or gantry systems.

Another trend affecting multitasking machines is the move toward Industry 4.0, which involves connecting machines and collecting large amounts of data. While this can benefit machining operations very much, it also creates complications on a shop floor.

“If you spill out terabytes of data on the floor,” Wallace said, “what do you do with it and how do you utilize the different features of a machine to take advantage of it?”

To help shop floor personnel deal with data deluges, DMG Mori USA offers Celos, a human-machine interface that the company lays on top of third-party machine controls to make them easier to use. While Celos works with all DMG Mori USA machines, he said it can be especially helpful to users of multichannel, multi-axis multitasking machines.

“There’s so much going on in those machines,” Wallace said, “but Celos makes interfacing with them a lot more straightforward.”

Other companies offering new multitasking options include Sudbury, Massachusetts-headquartered Methods Machine Tools Inc. The company now sells the Nakamura-Tome JX-250 multitasking turning center, which is said to provide the largest machining envelope in its class and comes in both single and twin lower-turret configurations.

With the twin lower turrets and the upper mill spindle, “you could have three tools cutting at the same time,” said Sergio Tondato, Nakamura-Tome product manager. 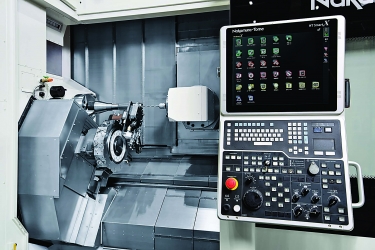 Like all Nakamura machines, the JX-250’s spindles don’t share guide ways. He said they are kept independent of each other to prevent transmission of vibration from one spindle to another.

“You could be doing finished turning on one spindle and heavy milling on another,” Tondato said, “so to Nakamura it’s very important that they do not share guide ways.”

An automatic toolchanger-style machine, the JX-250 can accommodate magazines that hold up to 160 tools. Tondato said this compares favorably with most competitive machines, whose magazines can hold only 100 to 120 tools. Larger-capacity magazines reduce changeover times and are good for lights-out operation, he said.

“At one point,” Tondato said, “people did not want a y-axis on a multitasking machine. But now all customers want as much y-axis travel as possible.”

He said the addition of a y-axis allows milling of tight-tolerance, off-center features, as well as the use of a larger selection of tools.

The redesigned machines “can cut almost any type of complex component, and the part comes out complete,” said Advanced Multitasking Manager Joe Wilker. “Job shops almost have to have them to be competitive nowadays.” 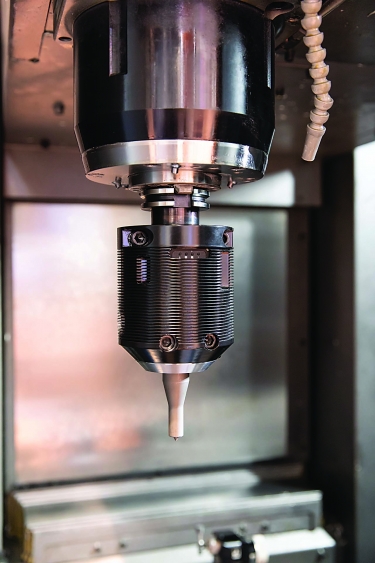 A friction stir welding head can be added to a machine tool to create a hybrid multitasking machine. Image courtesy of Mazak

One aim of the new design is to give two options for loading tools. Users can load them into the machine one at a time from the front or into a magazine at the rear of the machine.

Before, “if you had a robot in the front and it was caged off, you didn’t have access to the tooling, so you couldn’t go in and add anything if the machine was running,” Wilker said. “So we took the magazine to the rear of the machine. Now if you have automation mounted in the front and can’t get access to the ATC changer pod, you can go to the back and load tools directly into the magazine. This way, the operator can add (tools) to the machine and keep it running for the next job.”

The Integrex i-H also features Mazak’s Mazatrol SmoothAi CNC. In addition to Mazatrol’s conversational programming, the SmoothAi control uses artificial intelligence and machine-learning algorithms to manage machine components. The control presents operators with screens that are more user-friendly than in the past as well.

Wilker said this control technology can slash setup time when changing parts. For example, when taking advantage of the automatic jaw-changing capabilities of the new Integrex machines, an operator simply can tell the controller to change the jaws on each head, then call up the new program, and the machine is ready for the next parts.

Like their predecessors, the new Integrex machines are capable of hobbing in addition to milling and turning.

“Will they ever beat the speed of a gear hob?” Wilker said. “No. But if you have low or medium volumes and don’t want to spend a million and a half dollars on a gear machine, you can buy an Integrex and have gear capability at your fingertips.”

“We do not like the environment that powder creates in a machine tool,” Wilker said. “We like hot wire because it’s a much cleaner process, and the deposition rate is also 10 times faster.”

“On one side of a big trunnion table,” Wilker said, “you can grow a part pretty large, then final machining can be done on the same platform.”