Dear Doc: I grind cams and have the option of doing “constant rpm” or “constant metal-removal rate.” What’s the difference?

The Doc Replies: Cam grinding is just a funky type of cylindrical grinding, where the shape isn’t a basic circle but sort of an egg shape, which creates special challenges.

In plunge-type cylindrical grinding, the basic equation for specific mrr (smrr) is:

But here’s where it gets tricky. The workpiece surface velocity gets faster as the contact point of the wheel and cam gets farther from the axis of rotation. This changes the equation to:

That means surges occur in the smrr, increasing wheel wear and the risk of burn.

As a result, some clever people developed constant-smrr grinding. Here, the workpiece speeds up and slows down within one revolution, keeping the smrr constant and minimizing the surges. 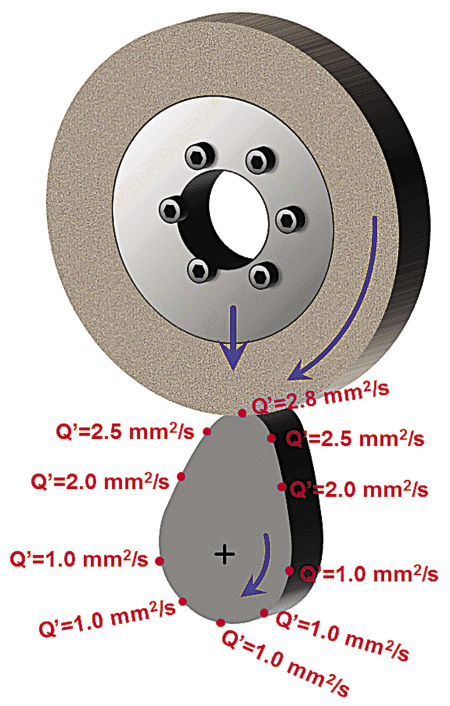 Changes in the metal-removal rate when grinding at a constant rpm. Illustration courtesy J.Badger.

But even this approach has issues. When the workpiece slows down, chip thickness decreases, which increases the amount of rubbing, heat generation and, at least relatively, the risk of burn. Also, slowing down increases the time a point on the workpiece is in the hot zone, which raises the temperature. Finally, when grinding the flat portion of a cam, the contact area between the wheel and workpiece increases, further increasing the risk of burn, and when grinding the round portion, the contact area decreases, lowering the temperature but consuming the wheel quicker.

To complicate matters, there’s the decision about whether to take numerous high-rpm passes with a small DOC or fewer low-rpm passes with a larger DOC. The better option depends on the desired amount of jerk, which is the rate of acceleration change. Jerk limitations place constraints on how quickly you can oscillate the wheelhead spindle up and down, and how quickly you can vary the workpiece rpm. In general, a fast rpm and a small DOC will produce the lowest temperatures and the most wheel wear—within the jerk limitations of the machine.

Last year, I was involved in a fascinating project to optimize cam grinding for a major European truck manufacturer. Instead of using the constant-rpm or constant-mrr process, we developed the constant-temperature process, a complex, dynamic model of the ever-changing contact between the wheel and workpiece. We then measured the grinding power and determined a cycle that produced a near-constant temperature throughout the cycle, eliminating burn and minimizing wheel wear. Read about it at cteplus.delivr.com/2h3bq.