A throttle plate controls airflow into an engine and thereby determines its output. In production, the plates are stamped in volumes of thousands per day. Protomatic typically makes prototype and limited-run plates in lots of 100 to 500. The prototype plates are used for testing. “The fuel system, brakes or anything that is safety critical goes through a battery of tests,” said Doug Wetzel, general manager. “It is not uncommon that one of the big automotive companies will do 200 to 500 plates in different dimensions, varying by 0.0005 " or 0.001 ". They don’t want to have throttle-sticking problems.”

Protomatic manufactures the plates out of CA260 brass or 6061T6 aluminum in diameters from 60mm to 75mm and thicknesses from 1.1mm to 3.1mm. For brass plates, squares of stock are cut from a 36 "×96 " sheet with a shear. For a plate with a final diameter of 75mm, the squares are about 75mm on a side. Then two mounting holes are drilled through the plate on a Haas or Hardinge CNC mill. “We like to buy American,” Wetzel said, “so we use domestic machine tools.”

The holes, typically 0.130 " in diameter and reamed to ±0.001 ", are drilled 1 " apart. Protomatic holds the stock with clamps or in a vise. “For the volumes that we are doing, we hold them individually,” Wetzel said. “We don’t stack them because we want to control the hole diameter very tightly.”

The next step is milling a 6° angle of a varying width around the edge of the plate. The slanted, compound elliptical shape that results ensures the plate edges are parallel to the bore walls when the plate is tilted 6° in the closed position in the throttle body bore.

Initially, the shop machined the plate edges on a lathe, using a milling head. The square piece of stock was screwed onto an angled mandrel that had locating pins. “On a lathe it was effectively a one-at-a-time operation,” Wetzel said. “Cycle time might be a couple minutes, then you have another minute unscrewing one plate and putting on the next one.”

The operator was almost continually engaged in mounting and unmounting plates. As plate volume increased, Protomatic sought to free up operator time and make the process faster and more repeatable.

The answer was a custom magnetic fixture to hold a piece of stock at an angle on the bed of a CNC mill and a special cutter programmed to perform circular interpolation around the plate edge. The shop puts eight fixtures on the mill table. The longer cycle time allows the operator to run another machine or perform another task, Wetzel noted.

This electromagnetic fixture, featuring a steel top plate that enables it to hold nonferrous parts, was engineered by Protomatic to improve process speed and repeatability when machining prototype automotive throttle plates. 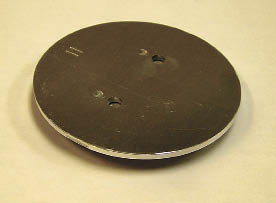 Protomatic machines prototype automotive throttle plates in diameters from 60mm to 75mm and thicknesses from 1.1mm to 3.1mm.

The approximately 5 "-tall fixture has a wedge-shaped aluminum base that tilts the part at the desired 6° angle. Bolted to the base is a low-carbon steel flange with a central hole. In the center of the flange is one pole of a 20w electromagnet. The pole has pins that match the holes on a throttle plate. In use, the throttle plate stock is placed over the pins, and a 0.200 "-thick, 2 "-dia. steel cap, also with holes matching the pins, is placed over the plate. The outer rim of the flange forms the magnet’s other pole, and the cap closes the magnetic path through the nonferrous plate.

An M code in the machine tool control activates the electromagnet. Wetzel said it is a problem to hold the thin throttle plates flat, and with the magnet “we probably have 300 lbs. of force holding that plate down in a nice, uniform fashion.” He noted that the magnet coil generates heat, which can go into the part and is a concern because of the ±0.0005 " tolerance. However, flood coolant and the operation’s short cycle times minimize the opportunity for heat to change part dimensions.

Before milling the plates, the square stock is trimmed to an octagon to minimize interrupted cuts. The custom milling tool, produced by Rojo Industrial, Novi, Mich., machines the plate edge at 3,500 rpm and a 15-ipm feed rate. “Accuracy is more important than speed,” Wetzel said.

Next, two 8mm-long flats are machined on opposite edges of the plate at the point where the shaft that holds the plate pivots in the throttle body bore. A 3⁄8 "-dia. carbide endmill mills the flats at 3,500 rpm and 15 ipm.

Machining the OD angle and flats generally leaves a burred edge. Protomatic deburrs the features with a custom tool featuring a V-shaped cutting edge, which chamfers the top and bottom of the plate simultaneously.

“We don’t want to hand deburr the part,” Wetzel said, adding that the shop’s philosophy is to automate whenever possible. “A lot depends on the volume; if we are doing more than 500 parts, we automate the process.”

Protomatic has converted much of its machining equipment from 3- and 4-axis to 5-axis operation. Wetzel said: “We use multiple axes even in a prototyping environment to reduce handling and ensure consistency. We have very talented people, but even talented people occasionally get distracted. The goal is to mistake-proof the operation when doing critical components.”

After the operations on the mill, the plates go through a coining or stamping operation in a special press. “We make a small dimple, 0.020 " to 0.030 " deep on a 0.060 "-thick plate, just enough so people know how to orient it in assembly,” Wetzel said. The manufacturing operations may conclude with abrasive tumbling to impart a matte finish while removing less than 0.0001 ".

Protomatic was founded in 1971, largely to serve automotive customers. Then, amidst the massive upheaval in the U.S. automotive industry, the company converted from 80 percent automotive to 80 percent medical and also serves the aerospace industry. “Since we had a highly talented staff and we were used to doing higher precision parts, the medical and aerospace parts were a perfect blend for us,” Wetzel said. “They are very similar because they are mission-critical types of parts. Even though they are quite different, serving both of those industries makes logical sense.”