On a high-volume production line, the time it takes to loosen and tighten a standard tapholder’s collets or setscrews whenever a tap dulls or breaks can mean lost revenue and missed deadlines. That’s why many shops use quick-change tapping systems. These units can reduce tool-change times from minutes to a few seconds by allowing users to remove and install taps with a simple, easy-to-operate mechanism.

But what if the quick-change tap adapter and tapholder aren’t operating reliably? What if wear and breakage begin to take a high toll on the components? If the components must be replaced frequently, the advantages of quick-change tooling are lost. The cycle time that might have been saved is used, instead, to remove the tool from the tap adapter and load it into a new one or to install a good tapholder in the spindle. To avoid downtime and protect their investment in a quick-change tapping system, shops must take pains to choose a system designed for reliability.

The Weak Link
One of the most likely places for trouble to occur in an unreliable quick-change tapping system is at the point where driving torque is transferred from the tapholder to the tap adapter. During a tapping operation, the cutting forces are concentrated at this point. The most abrupt force is imposed on the system when the tapping process is finished, and the tap is reversed to back it out of the threaded hole.

Over the years, two different designs have emerged to transfer this torque. The older design is the tang drive, which uses two tangs measuring approximately 3¼8" by 1¼8" and spaced 180° apart on the tap adapter. These tangs engage two matching cutouts at the very end of the tapholder.

As many users have found, this type of drive has an inherent weakness. The design demands some measurable clearance between the tangs and the cutouts so the operator can slide the tap adapter into the tapholder with little resistance. Although this clearance is small, in the range of 0.010" to 0.020", and makes the installation of the tap adapter easier, it is enough to allow the two components to move against each other. As this movement occurs during the tapping operation, it causes the tang to crash into the side of the cutout. At the beginning of a tapping operation, the clearance between the tang and the cutout closes up in one direction, slamming the side of the tang against the wall of the tapholder. When the tap is suddenly reversed at the end of the operation, the tang slips in the other direction and slams into the opposite wall of the cutout.

Figure 1: These tapholders were unable to withstand repeated impacts of the tap adapters' tangs against the walls of their cutouts.

These impacts occur at the corner of the cutout. This is also the single point where all of the driving force is concentrated. Under the pressure of these repeated impacts and the concentrated driving force, the corner eventually cracks. In some cases, a section of the tapholder’s wall breaks away (Figure 1). In either case, the tapholder is ruined, and the operator must halt the tapping operation to replace it.

While there are still a considerable number of tang-drive tap adapters in use, a newer ball-drive technology is beginning to dominate the field. This technology was invented by T.M. Smith, founder of T.M. Smith Tool Intl. Corp., Mt. Clemens, MI. Since the expiration of T.M. Smith’s patent, other companies have entered the market with their own versions of the ball-drive quick-change tapholding system.

The original T.M. Smith version employs six steel balls mounted in the tapholder to retain and drive the tap adapter. The balls, which fit into machined detents spaced 60° apart around the base of the tap adapter, are located relatively deep inside the tapholder (Figure 2). To remove or install a tap adapter, the operator pushes back on a knurled shell around the outside of the tapholder. This releases the balls, allowing them to retract to permit the tap adapter to be installed in or removed from the tapholder. When an operator installs a tap adapter into the holder, he inserts it into the front of the holder and then rotates it until the balls click into the detents on the rear of the adapter and the unlocking shell clicks back into its original position. With the balls in their mating detents, the adapter is firmly locked into place. 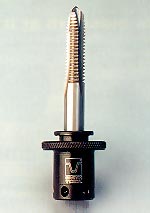 Figure 2: The detents in the base of this tap adapter are designed to receive the steel balls mounted in a ball-drive quick-change tapholder.

The six balls spaced evenly around the inner diameter of the tapholder provide balanced driving torque. This eliminates the problems associated with tang drives, where the driving force is concentrated at the one point of contact between the tang and the cutout. Also, because the balls fit tightly into the detents in the tap adapter, there is no play to allow the system’s components to slam into each other. These advantages allow a ball-drive system to perform reliably even in situations that involve cutting forces too high for a tang-drive system, such as tapping hard-to-machine materials, tapping through inclusions in the workpiece material, or tapping with dulled taps.

Strength and Precision
Ball-drive systems can be damaged, however—especially if they are made of inferior materials. The balls, the tapholder housing, and the body of the adapter are all subject to high forces at the point of contact between each ball and the other components. Consequently, all of these components must be made of properly hardened ball-bearing steel to withstand these forces. Although some manufacturers use softer steels to reduce costs and manufacturing time, a ball-drive system made of these materials will allow the ball to dig into the material, creating a galled or brinelled mating surface, thus preventing the system from functioning properly.

The balls and detents also must be precisely located to match up radially and at the same depth. Without such accuracy, the balls will not fit firmly into the detents.

In the T.M. Smith design, the balls are used for float, thrust, and drive. It is the company’s belief that using balls for these functions produces less friction and wear than other methods, because the ball drive allows the holder to float freely for the full 360°.

A ball-drive quick-change tapping system precisely built of properly hardened ball-bearing steel can be used in any tapping application. With the proper shank, a tapholder can be fitted into the spindle of any manual or CNC tapping machine, drilling machine, milling machine, or lathe.