Three years ago, as the Kirkland, Washington-based contract manufacturer’s amount of 5-axis machining grew, management determined that an increasing number of little crashes potentially could lead to one big crash, which might damage an expensive machine tool and disrupt deliveries to customers.

With more than two dozen 5-axis machining centers in use, Vice President Travis Moore and his team began looking for an alternative to the traditional push-the-green-button-and-pray program prove-outs. In the end, the manufacturer turned to Vericut machine simulation software from CGTech Inc., Irvine, California. 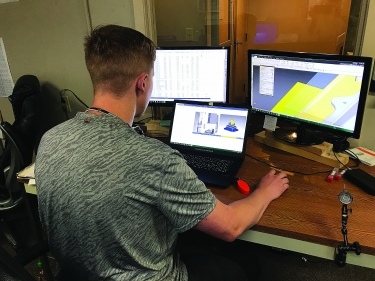 “A number of companies tried very hard to sell us on their simulation software,” Moore said, “telling us how their solution would address all of our needs. But after a lot of research and talking to a number of people, we found that Vericut was the only software with true G-code simulation.”

On the market since 1988, Vericut reads the code used by a machine controller, picking up where CAM systems leave off. Every workpiece, fixture, toolholder and machine component can be accurately modeled so nothing is left to chance. Gouging and uncut areas are clearly identified. Setup times are reduced. Because complete visibility of the machining process is achieved, opportunities for process improvement are enhanced. Best of all, collisions are virtual rather than spark-filled and noisy.

Moore’s parents founded Jemco when he was a child. Their decision to pursue sheet metal fabrication and machining under the same roof was made at the outset with the purchase of a Finn-Power turret punch press and an Okuma Cadet machining center.

In its machine shop, Jemco has nearly 40 CNC lathes and machining centers. Equipment builders include Haas, Okuma, Mazak and others, but topping the list is a pair of DMG Mori NMV 1500 5-axis vertical machining centers—one sporting a 40,000-rpm spindle—serviced by a 34-pallet robotic cell material-handling system.

“We try to be really diverse,” Moore said. “My dad saw from the very beginning that there was value in having a one-stop shop. There are plenty of complex fab parts that require milling, and he felt that managing both was something he could do fairly easily. It’s been smooth sailing ever since.”

Part of that smooth journey, at least recently, has been due to Vericut.

“All those little crashes we were seeing have died down to nothing,” Moore said. “That’s saying a lot because most of our production quantities are small—between two and two dozen pieces—and we therefore set up many jobs each day. As anyone in this business will tell you, the more times you’re setting up, the more opportunities you have to mess up. I strongly tie our lack of crashes to Vericut.”

Having lots of jobs means having lots of programmers. Jemco has seven, each with his or her own way of doing things. CNC Programmer Chuck Macomb said Vericut helps answer the many questions that arise when generating toolpaths.

“Is there any interference between the toolholders and the vise?” he asked. “Did the program cut the part right? Is the spindle going to bump the workpiece? Did each axis go the direction you expected it to? There are all kinds of problems that can occur. But because the CAM software doesn’t see the same thing the machine sees, there can be occasional surprises. Vericut eliminates the wondering.”

“We use Siemens NX for our CAM platform here,” he said. “It does a good job on most parts of telling you if you’re going to crash or violate the part in any way, but you have to pay close attention to see it. Sometimes things are moving so fast that it’s easy to miss something, and that’s where Vericut comes in. You can see any areas that you missed during programming, any gouges and especially any crashes.”

Bryan Jacobs is the marketing manager at CGTech, located in Irvine, Calif. For more information about the company’s Vericut CNC simulation software, call (949) 753-1050 or visit www.cgtech.com.