Shopping for a machining center was simpler when buyers had only two basic spindle choices: CAT or BT. Both of these “steep tapers” have an angle of 3.5 in./ft., or 7" in 24" (7/24), and are based on the 1927 patent by Kearney & Trecker Corp., Brown & Sharpe Manufacturing Co. and Cincinnati Milling Machine Co.

With the development of automatic toolchangers in the late 1960s, machine tool builders in Japan modified the patented design and invented the BT standard. In the 1970s, tractor manufacturer Caterpillar Inc., Peoria, Ill., changed things again with a flange design now known as CAT, or V-flange.

During the late ’80s, machine tool builders began offering vertical and horizontal CNC mills with spindle speeds higher than the 6,000 to 8,000 rpm common at the time. As rpm increased, so did problems with steep-taper toolholders. Chief among them is the tendency for the mating spindle and toolholder tapers to stick together. This is caused by the expansion of the spindle housing at high speeds, which allows the toolholder to be pulled upward into the spindle taper, jamming it in place.

HSK spindles, like the one shown in the illustration above, offer advantages steep-taper styles can't. Image courtesy of IBAG North America.

One way to eliminate this problem is by extending the toolholder flange upward, thus creating a hard stop against the spindle face and preventing further Z-axis movement.

This is the approach taken by BIG KAISER Precision Tooling Inc., Hoffman Estates, Ill. Jack Burley, vice president of sales and engineering, said the BIG-PLUS system—developed in 1992 by BIG Daishowa Seiki Co. Ltd., Osaka, Japan—relies on a bit of elastic deformation in the spindle to provide dual points of toolholder contact at its face and taper, eliminating upward holder movement as the spindle expands. He said it’s also more rigid, with tests showing that the deflection on a CV40 BIG-PLUS toolholder measured at 70mm (2.755") from the spindle face is only 60µm (0.002") when subjected to 500kg (1,102 lbs.) of radial force, roughly half that of a traditional V-flange toolholder.

For people who think they can’t take advantage of this technology because they don’t plan to buy a new machine, they might want to check with their distributor, as their machine may already be equipped for BIG-PLUS. “There are now roughly 150 machine builders that either offer BIG-PLUS or have it as a standard,” Burley said. “The beauty of the system is that it can use either standard toolholders or BIG-PLUS interchangeably. So for drilling and reaming work, you can use a conventional collet chuck, but for heavy milling cuts or profiling operations at higher spindle speeds, BIG-PLUS improves accuracy and tool life.”

Burley does not recommend BIG-PLUS for older machines that have never seen these toolholders, because CAT and BT taper-only contact holders tend to bellmouth the spindle over time, leading to undesirable results. And BIG-PLUS, like any dual-contact toolholder, requires particular attention to cleanliness, as chips caught between the spindle face and the toolholder can cause serious problems. He also recommends staying below 30,000 rpm when using 40-taper holders, noting that higher speeds are better handled by HSK spindles and holders. 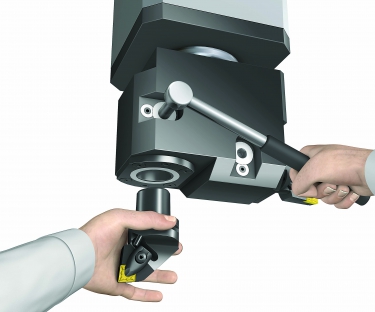 HSK was developed during the late ’80s at RWTH Aachen University in Germany as a collaboration among various machine tool builders, cutting tool manufacturers and industry experts. (HSK is the German acronym for hollow taper shank.)

Unlike CAT, BT and BIG-PLUS, which have solid bodies, HSK and other hollow toolholders expand along with the spindle cartridge as the rpm increases. This alone improves accuracy and rigidity at elevated spindle speeds, but these systems also incorporate dual face and taper contact, similar to BIG-PLUS. They’re also much lighter than solid-body designs, making them more suitable for extreme spindle speeds.

HSK is available in six styles, HSK-A through HSK-F, as well as the newest style, HSK-T, which is specifically for multitask, or mill-turn, machines. Common sizes range from 32mm (1.259") to 125mm (4.921"), as measured at the face diameter, with some capable of running at 50,000 rpm or higher. Dual-contact designs such as this are more difficult to produce, requiring extreme accuracy in toolholder and spindle taper alike. There is also a new U.S. standard for HSK, recently published by ASME. 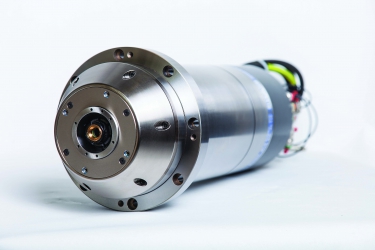 Like its other hollow-body, dual-contact cousins, Capto has a short taper, about as long as it is wide. It, too, relies on a miniscule amount of elastic deformation of the toolholder, which expands slightly as it is drawn up and into the machine.

Sandvik Coromant patented Capto in 1988, about the same time others began developing steep-taper alternatives. What’s most noticeably different about Capto is its shape. Unlike HSK’s plain taper, Capto has a polygonal geometry that looks like a well-rounded, gently sloping pyramid, which Grimes said gives it greater torque-transmission capabilities and accuracy than competing systems.

“Since Capto doesn’t need drive keys or balls to orientate, there’s no backlash,” he said. “You can repeatedly take any Capto tool out of the spindle and replace it within 0.000080" all day long. And because it doesn’t rely on a key to drive it, torsional forces are distributed evenly around the polygon.”

The Capto system has one disadvantage: Because of its complex shape, it’s even more difficult to machine than competing dual-contact systems. “It’s much more complicated than HSK, so it does cost a bit more to put a Capto system in a machine,” Grimes said. “But when you put that against the added stability and repeatability, the 5,500 or so [Capto] toolholders available from Sandvik Coromant and other tooling manufacturers and its ability to perform both static and rotating work, I think it’s a superior solution.”

Bill Redman, manager of MTI Americas at Kennametal Inc., Pittsburgh, might argue the point. Although the KM4X platform has not been around as long as Capto, it is making significant inroads with large-format machine builders. “It’s really catching on in aerospace,” he said.

KM4X is available in 100mm (3.937") and the newer 63mm (2.480") standard. Both use the same design, which looks at first glance like an HSK. But the KM4X has four holes around the periphery that accept a series of ball bearings to lock the tool in place, which is different from the two-hole KM design that’s been around for decades. Those holes are KM4X’s strength, Redman said. Together with the other attributes of the proprietary interface, they provide “the highest rotational speed capabilities and clamping force of any comparably sized system available.”

But this doesn’t spell the death of Kennametal’s other KM interfaces. “On the larger sizes, say 80mm  and up, it probably makes sense to transition to KM4X. But on all the smaller sizes, KM remains a robust solution for many of our customers, especially those with live-tool, multitasking and turning applications.”

Bill Popoli, president of IBAG North America, North Haven, Conn., said the company started building steep-taper spindles in the late ’80s, but 95 percent of its work has since transitioned to HSK spindles. As mentioned earlier, the extreme accuracy needed to guarantee near-simultaneous contact between the spindle face and taper is challenging, requiring micron-level tolerances in toolholder and spindle alike.

These requirements were impossible to meet when steep taper was first developed, Popoli said, resulting in looser standards overall for CAT and BT spindles than the ones applied to HSK spindles and toolholders. Because of this, purchasing an HSK or equivalent toolholder automatically makes one “part of the club” when it comes to balance, accuracy, repeatability and tool life.

The clamping mechanism for HSK toolholders is distinctly different from that of steep-taper holders.  Image courtesy of BIG KAISER Precision Tooling.

That’s not to say, however, that shops firmly married to steep tapers should settle for less. Popoli recommends purchasing the highest-quality tooling possible and paying close attention to the stated tolerance. Always stay below 20,000 rpm with 40-taper holders, and reach no more than 30,000 rpm with 30-taper ones. Use balanced holders and
high-quality retention knobs that have been properly torqued—otherwise distortion at the small end of the taper may occur. And whatever the taper type, keep the spindle and toolholder clean at all times.

Bob Freitag agreed. The manager of application engineering at Minneapolis-based metalworking products and services provider Productivity Inc. said the lines are evenly split between traditional 40- and 50-taper CAT or BT tooling (much of which is BIG-PLUS) and HSK.

“It really depends on the application,” Freitag said. “Most of our die and mold machines in the 20,000- to 30,000-rpm range will have an HSK63A or HSK63F. When you get up around 45,000 rpm, you’re probably looking at an HSK32. But in horizontal machining centers and lower-rpm, high-torque verticals, you’ll see mostly steep tapers, as this is generally preferred for deep depths of cut and lower feed rates, where you’re removing a lot of material at once.”

For shops that want to make the leap to an HSK machine but are leery of investing in new toolholders, Freitag advised: “Anytime you buy a new machine, you should buy new toolholders to go with it. If not, the imperfections of the old toolholders will soon transfer themselves to the spindle on the new machine.”