Combustion components from Mitsubishi Power Systems had never been built outside of Japan until Savannah Machinery Works opened its doors in November 2010. We were in the unique and challenging position of having to develop every manufacturing process from scratch while maintaining a tight production schedule.

In other facilities where I have worked, it took up to 6 weeks to introduce a part to production even with established processes and workholding methods. At SMW, all parts were new, so we had to develop systems that enabled introduction of machining processes in days—sometimes hours. Working with variable part sizes complicated matters; they can be small enough to fit in the palm of your hand or as large as 400mm in diameter and weigh 200 lbs.

Flexibility is important because our product configurations require subassemblies to be machined between assembly-welding processes. Although shrinkage from welding is somewhat predictable, in-process dimensions are sometimes changed to accommodate variation from welding. Because dimensions are subject to change, we cannot fully commit to a machining process until the subsequent assembly is completed. Therefore, machining fixtures are often modified to accommodate dimensional changes during development.

I started with the HMCs as they are more critical to production. Each HMC has two pallets. To establish a common foundation and maximize flexibility, I selected two four-sided tombstones for each of our two 500mm HMCs. Having four available sides allows simultaneously setting up multiple parts or accommodating parts with multiple operations. I selected a two-sided tombstone for our 600mm HMC machine.

All five tombstones have a 2 " hole pattern. Each hole is bushed to accept a 5/8 " dowel at the top and has a 5/8-11 thread below the bushing to accept a screw.

The 600mm HMC typically machines large weldments and parts that do not fit on the 500mm machines. I opted to mount the two-sided tombstone on the pallet where we mount large fixtures and left the second pallet empty for the weldments. Having the same pattern on all tombstones enables the smaller fixtures that typically run on 500mm machines to be placed on the 600mm machine, if needed.

The combustion shop has three VMCs: two 500mm and one 600mm. We plan to add grid plates to the VMCs. The grid plates will have the same hole pattern as the tombstones, so HMC fixtures can be mounted on the VMCs.

By utilizing the same mounting configuration on all machines, we have created a foundation for universal workholding. This foundation allows us to build fixtures that interface with every machining center by simply including provisions for pinning and bolting a fixture to a plate or tombstone. Universal mounting reduces the chance of lost production due to bottlenecks and helps prevent development from interrupting production. 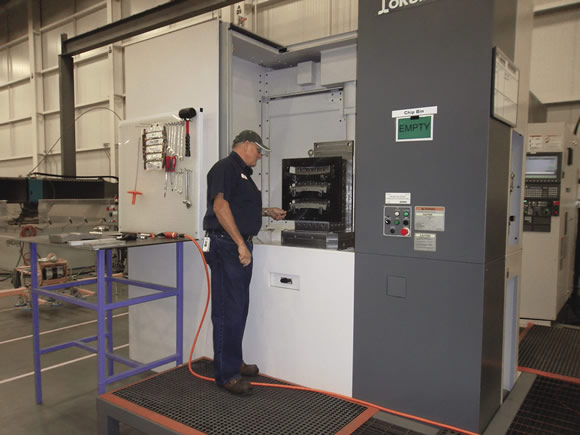 Another important workholder is the milling vise, which should offer flexibility. One such vise has two pinholes in the base to allow it to quickly and accurately interface with a tombstone.

We make soft jaws for vises in-house by cutting blanks from 1 "-thick steel plate on a flatbed waterjet. During process development, we machine the blanks to the desired configuration and test the process. If the process is acceptable, we will make the jaws from a heat-treatable alloy and then harden them for production purposes.

For round parts, we purchased 15 "-dia., 6-jaw chucks with removable top jaws. Using lathe chucks on machining centers in not new, but we have been creative, sometimes treating them like dedicated fixtures by installing timing pins on the jaws or by using only two or three jaws to hold odd-shaped parts. We made chuck mounting plates with the 2 " hole pattern so the chucks could be quickly and accurately located on tombstones.

Turning is a challenge because most parts have large length-to-diameter ratios and are fabricated from sheet metal, which makes them inherently unstable. Our part configurations are not suited to secondary support with tailstocks or steady rests, which means we hold everything unsupported in 3-jaw hydraulic chucks supplied with the lathes.

In addition, finding soft jaws of the appropriate size and configuration for our operation is often impossible. Our solution is to weld pieces of cut plate onto standard serrated jaw blanks to increase their length or diameter, and then machine them like any other soft jaw. These fabricated jaws hold large assemblies securely, safely and reliably when turning.

As we continue process development, we are identifying processes that would benefit from dedicated lathe fixtures. We plan to partner with a tooling manufacturer that specializes in rotating toolholders and design a system with a base fixture that accepts part-specific turning fixtures, thereby providing a quick-change system comparable to the tombstones.

Having identical interfaces on all of the machines avoids bottlenecks by enabling us to move parts to underutilized machines. Stocking expensive components is not necessary, and we are not subject to running out of proprietary components because low-cost dowels, socket-head-cap screws, homemade vise jaws and standard soft jaws are all that’s needed to build fixtures.

One unforeseen benefit of our workholding system is the ability to transfer some of the fixture design from engineering to the shop, where experienced machinists and toolmakers can assist. Most importantly, we routinely move from concept to completion in a few hours. Having this flexibility has allowed SMW’s shop to cost-effectively maintain tight development schedules.