3D Printing, To Infinity and Beyond

Bleacher philosophers have long noted a distinction that baseball has from other sports: Where the gridiron and the basketball court are rectangular spaces that completely circumscribe the area of play, the baseball field extends, in at least one direction, to infinity. A ball hit between first and third, and the fielder chasing it, could, in theory, travel any distance and be in play.

That poetry of open space is evoked by the Infinite-Build 3D Demonstrator additive-manufacturing (AM) system from Stratasys Ltd., developed with input from Boeing and Ford for large-part production in custom OEM and on-demand aftermarket applications.

The Infinite-Build addresses the requirements for large, lightweight, thermoplastic parts with repeatable mechanical properties. Its novel approach to FDM (fused deposition modeling) extrusion, according to Stratasys, increases throughput and repeatability.

With traditional 3D printers, the printer head moves horizontally, adding layer upon layer so that the printed object grows vertically. The Infinite-Build turns that concept on its side. The Z-axis is oriented vertically so printing occurs sideways. Instead of building up, it builds out—completely out.

As new layers are added to the print at one end, the other end—what would have been the bottom if the Z-axis was horizontal—moves toward the back of the machine in 1" (25.4mm) increments. When the print reaches the back of the machine, it just keeps going. The back is open (though protected by thermal curtains to control cooling), and as long as support is supplied to the emerging print and build material is supplied to the printer, the print can keep getting longer.

Boeing is using an Infinite-Build 3D Demonstrator to explore the production of low-volume, lightweight parts. Ford is also exploring manufacturing applications for this AM system. Stratasys believes the design will prove to be a home run. 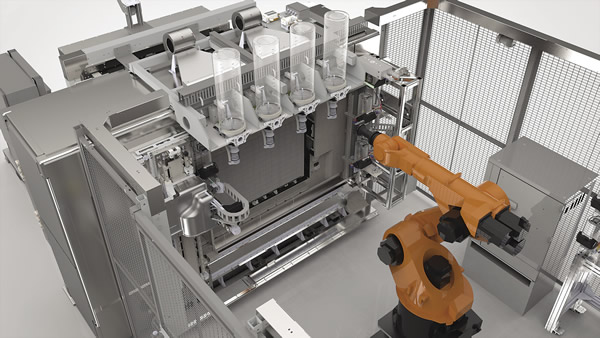