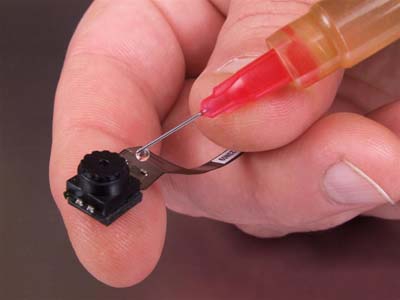 Combining superior physical strength and fast cure rates, Master Bond UV16 is formulated for demanding bonding, sealing, and coating applications. It is a one component, no mix system and cures in one minute or less at room temperature with commercial UV light sources. This 100 percent reactive epoxy is uninhibited by oxygen and does not release any solvents or volatiles during the curing process. UV16 will cure in thicknesses up to 0.125 inches and has a 2 percent to 3 percent shrinkage rate, which is substantially lower than most free radical UV adhesives.

Once cured, it delivers a tensile strength exceeding 4,100 psi and a Shore D hardness over 75. Post-curing UV16 at 90 degrees to 125 degrees C for 30 minutes gives the adhesive a glass transition temperature of 135 degrees C and enhances its chemical resistance. UV16 offers superior chemical resistance, especially against acids and solvents. After a three month immersion in 20 percent sulfuric acid, it exhibited less than a 3 percent weight gain. UV16 had a weight gain of less than 2 percent when immersed in 90 percent isopropyl alcohol for the same amount of time.

This epoxy also features excellent electrical insulation properties up to 300°F. Master Bond UV16 has a viscosity of 200 to 400 cps and adheres well to a wide array of substrates, including plastics, glass, and many metals. A higher viscosity version called UV16TK is also available. UV16 has a 6 month shelf life in unopened containers and is available in syringes, half-pints, pints, quarts, gallons, and 5 gallon pails.