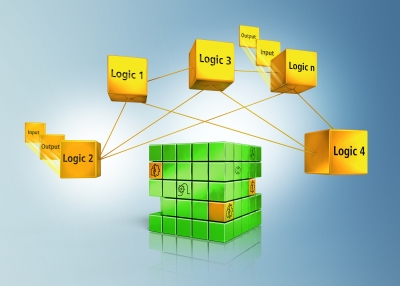 By increasing modularity and scalability, a new generation of Beckhoff TwinSAFE safety controllers permits optimal adaptation to the specific safety requirements of individual machine concepts. The ability to distribute the intelligence of an entire safety application across multiple TwinSAFE Logic-capable I/O modules means flexible implementation of increasingly modular architectures. These safety architectures can adapt to varied system requirements even more effectively than in the past.

With the new Beckhoff safety controllers based on the established EL6910 TwinSAFE Logic terminal, it is possible to adapt the TwinSAFE system even more specifically to the exact requirements of a machine concept, as well as to a broader spectrum of programmable safety applications. The new I/O components include:

Just like the TwinSAFE Logic-capable I/O and motion products that are already available from Beckhoff, the three new I/O modules can be used as controllers for the direct execution of customer-specific safety projects. A special feature is their communication capability. Like a dedicated controller, the safety project on the corresponding TwinSAFE I/O component can establish direct communication relationships with other safety-relevant devices and preprocess the data internally. This makes it possible to implement highly granular machine modules with distributed safety applications. The central safety controller, if it exists in the application scenario, only needs to process the data already accumulated.

The consistent hardware and software modularity of the TwinSAFE system even simplifies the implementation of very complex safety applications, and the combination of I/O and TwinSAFE control functionalities in a single I/O component makes it easier to distribute safety tasks across individual machine modules. This approach also reduces hardware costs. In terms of engineering, the customizing function speeds up the engineering process and makes it more convenient. It also ensures minimum validation effort, which in turn further reduces development costs.

Safety projects can be modularly designed in TwinCAT software as usual. However, the new customizing function enables each module to be configured into the following operating modes:

With the corresponding configuration of replacement values for the interfaces between the different modules, users can implement highly complex, modular and scalable architectures while reducing development costs. For example, a single safety project can be used for an entire family of machines by simply deactivating any modules that are not needed according to the given application requirements.