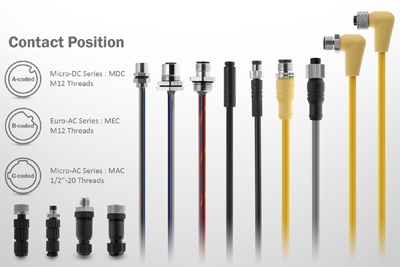 Mencom's quick disconnect sensor connectors and cabling offers fast and reliable solutions for the connectivity between the sensors and the control panel. The sensor cables are over-molded with a variety of outer jacket material with or without shielding to provide the next line of defense for harsh applications. Armored cables for enhanced protection are available in MDC, MAC and MEC series.

The MDC series has a single keyway which is known as A-coded. The M12 is a reference to the thread type used in the connection of this product. The euro color code (without a ground wire) and the single keyway (A-Coded) distinguishes the MDC from other connectors that are similar in size and function. The uses of these applications in industrial automation are limitless, but they are commonly used in factory automation for items such as sensors, actuators, motors, switches, safety light curtains and mats, and interlock switches to name a few.

Although the MAC series is commonly used for AC or DC application and similar in size to the MDC series, it has some unique differences. The MAC series uses a ½-20 mating thread and has a first make last break extended ground pin. The use of a double keyway (C-Coded) prevents it from accidentally plugging into one of the other similarly sized connectors.

The MEC series has a reversed single keyway which is known as B-coded. This allows two unique M12 connectors to be mounted on the same panel without fear of incorrectly coupling connectors to equipment with varrying voltage and amperages. As with the MDC and MAC series, the Euro-AC does not imply that they are only used in AC applications.

The M8 (NAN-series) is often referred to as a "pico" or "nano" connector. The small size makes it the perfect choice when space is limited. The M8 is commonly used with many of the miniature proximity, hall-effect and photo-electric sensors. The NAN series is available in 2 different versions; snap-on (available in 3, 4 and 6 pole) and thread-on (available in 3 and 4 pole). Male connectors in this series can be used to mate with both the snap-on and threaded females connectors. The male has threads and the small snap ring. Both snap-on and thread-on versions have the same water tight specifications (IP67) as well as the same voltage and amperage rating. It is simply customer preference as to which one suits their needs. Please note that there is no such part as a snap-on female receptacle.